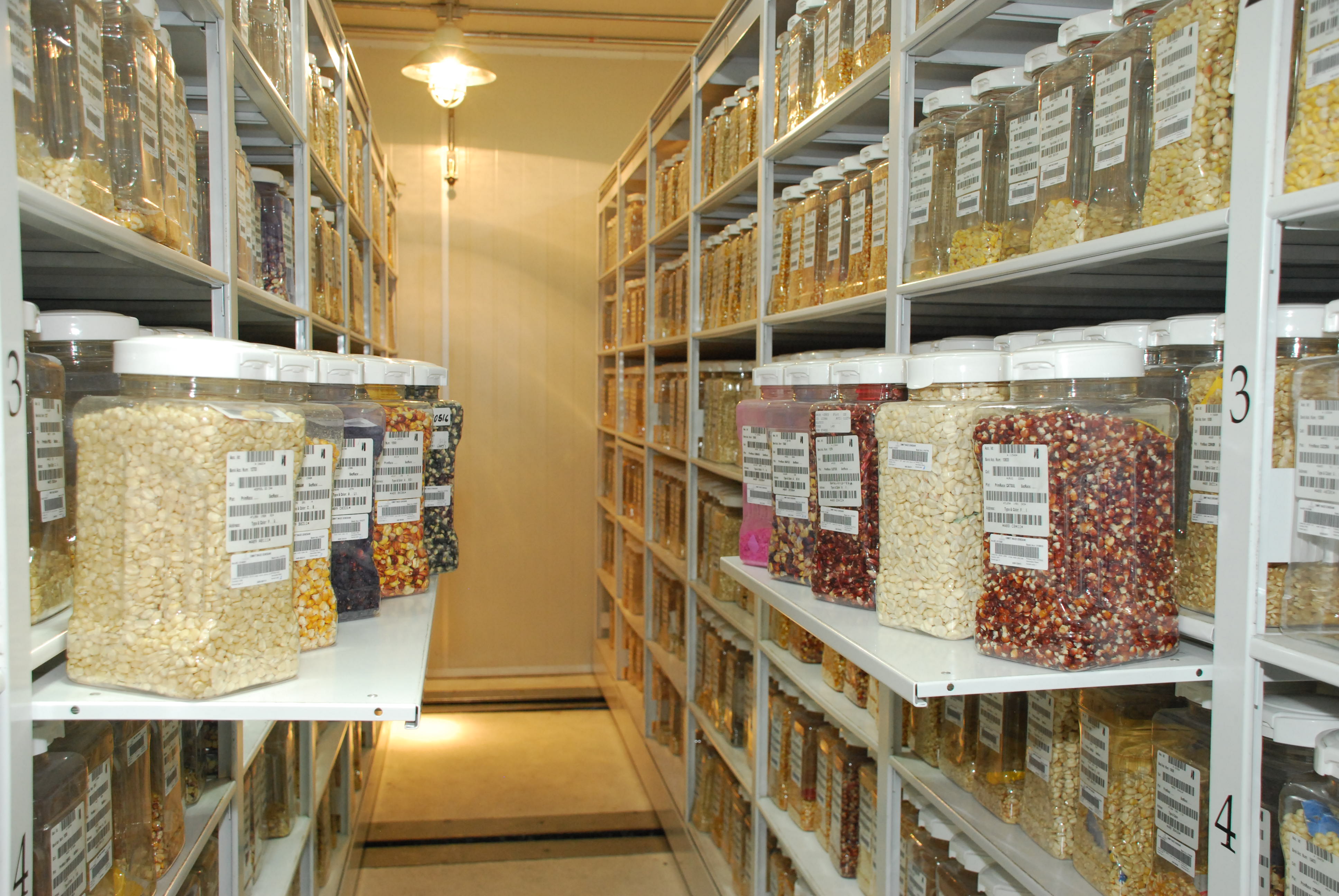 This story is one of a series of features written during CIMMYT’s 50th anniversary year to highlight significant advancements in maize and wheat research between 1966 and 2016.

EL BATAN, Mexico (CIMMYT) – Maize and wheat biofortification can help reduce malnutrition in regions where nutritional options are unavailable, limited or unaffordable, but must be combined with education to be most effective, particularly as climate change jeopardizes food security, according to researchers at the International Maize and Wheat Improvement Center (CIMMYT).

Climate change could kill more than half a million adults in 2050 due to changes in diets and bodyweight from reduced crop productivity, a new report from the University of Oxford states. Projected improvement in food availability for a growing population could be cut by about a third, leading to average per-person reductions in food availability of 3.2 percent, reductions in fruit and vegetable intake of 4 percent and red meat consumption of .07 percent, according to the report.

Over the past 50 years since CIMMYT was founded in 1966, various research activities have been undertaken to boost protein quality and micronutrient levels in maize and wheat to help improve nutrition in poor communities, which the Oxford report estimates will be hardest hit by climate change. As one measure of CIMMYT’s success, scientists Evangelina Villegas and Surinder Vasal were recognized with the prestigious World Food Prize in 2000 for their work developing quality protein maize (QPM).

“We’ve got a lot of balls in the air to tackle the ongoing food security crisis and anticipate future needs as the population grows and the climate changes unpredictably,” said Natalia Palacios, head of maize quality, adding that a key component of current research is the strategic use of genetic resources held in the CIMMYT gene bank.

“CIMMYT’s contribution to boosting the nutritional value of maize and wheat is hugely significant for people who have access to these grains, but very little dietary diversity otherwise. Undernourishment is epidemic in parts of the world and it’s vital that we tackle the problem by biofortifying crops and including nutrition in sustainable intensification interventions.”

Undernourishment affects some 795 million people worldwide – meaning that more than one out of every nine people do not get enough food to lead a healthy, active lifestyle, according to the U.N. Food and Agriculture Organization (FAO).  By 2050, reduced fruit and vegetable intake could cause twice as many deaths as under-nutrition, according to the Oxford report, which was produced by the university’s Future of Food Programme.

As staple foods, maize and wheat provide vital nutrients and health benefits, making up close to one-quarter of the world’s daily energy intake, and contributing 27 percent of the total calories in the diets of people living in developing countries, according to FAO.

“Nutrition is very complex and in addition to deploying scientific methods such as biofortification to develop nutritious crops, we try and serve an educational role, helping people understand how best to prepare certain foods to gain the most value,” Palacios said.  “Sometimes communities have access to nutritious food but they don’t know how to prepare it without killing the nutrients.”

The value of biofortified crops is high in rural areas where people have vegetables for a few months, but must rely solely on maize for the rest of the year, she added, explaining that fortified flour and food may be more easily accessed in urban areas where there are more dietary options.

Conventional maize varieties cannot provide an adequate balance of amino acids for people with diets dominated by the grain and with no adequate alternative source of protein. Since the breakthrough findings of Villegas and Vasal, in some areas scientists now develop QPM, which offers an inexpensive alternative for smallholder farmers.

In Ethiopia, where average life expectancy is 56 years of age, the food security situation is critical due in part to drought caused by a recent El Nino climate system, according to the U.N. World Food Programme. More than 8 million people out of a population of 90 million people are in need of food assistance.  Almost 30 percent of the population lives below the national poverty line, 40 percent of children under the age of 5 are stunted, 9 percent are acutely malnourished and 25 percent are underweight, according to the 2014 Ethiopia Mini Demographic and Health Survey. The NuMe project is helping to shore up sustainable food supplies and boost nutrition in the country, where the vast majority of people live in rural areas and are engaged in rain-fed subsistence agriculture.

CIMMYT maize and wheat scientists tackle micronutrient deficiency, or “hidden hunger,” through the interdisciplinary, collaborative program HarvestPlus, which was launched in 2003 and is now part of the Agriculture for Nutrition and Health program managed by the CGIAR consortium of agricultural researchers.

Some 2 billion people around the world suffer from micronutrient deficiency, according to the World Health Organization (WHO). Micronutrient deficiency occurs when food does not provide enough vitamins and minerals. South Asia and sub-Saharan Africa are most affected by hidden hunger, which is characterized by iron-deficiency anemia, vitamin A and zinc deficiency.

Work at CIMMYT to combat micronutrient deficiency is aligned with the U.N. Sustainable Development Goals (SDGs) — in particular Goal 2, which aims to end all forms of malnutrition by 2030. The SDG also aims to meet internationally agreed targets on stunting and wasting in children under 5 years of age, and to address the nutritional needs of adolescent girls, older people, pregnant and lactating women by 2025.

The wheat component of the HarvestPlus program involves developing and distributing wheat varieties with high zinc levels by introducing genetic diversity from wild species and landraces into adapted wheat.

“We’re playing a vital role in this area,” said CIMMYT wheat breeder Velu Govindan. “Our research has led to new varieties agronomically equal to, or superior to, other popular wheat cultivars with grain yield potential at par or — in some cases – even superior to popular wheat varieties adopted by smallholder farmers in South Asia where we’ve been focused.”

Scientists are studying the potential impact of climate-change related warmer temperatures and erratic rainfall on the nutritional value of wheat. An evaluation of the effect of water and heat stress with a particular focus on grain protein content, zinc and iron concentrations revealed that protein and zinc concentrations increased in water and heat-stressed environments, while zinc and iron yield was higher in non-stressed conditions.

“The results of our study suggest that genetic gains in yield potential of modern wheat varieties have tended to reduce grain zinc levels,” Govindan said. “In some instances, environmental variability might influence the extent to which this effect manifests itself, a key finding as we work toward finding solutions to the potential impact of climate change on food and nutrition security.”

Scientists working with HarvestPlus have developed vitamin A-enriched “orange” maize. Orange maize is conventionally bred to provide higher levels of pro-vitamin A carotenoids, a natural plant pigment found in such orange foods as mangoes, carrots, pumpkins, sweet potatoes, dark leafy greens and meat, converted into vitamin A by the body.

Vitamin A is essential for good eyesight, growth and boosting immunity. Almost 200 million children under the age of 5 and 19 million pregnant women are vitamin A deficient, and increasing levels through maize kernels is an effective means of boosting it in the diet.

Maize breeders, who are currently working on developing varieties with 50 percent more pro-vitamin A than the first commercialized varieties released, identified germplasm with the highest amounts of carotenoids to develop the varieties. In Zambia, Zimbawe and Malawi, 12 varieties, which are agronomically competititve and have about 8ppm provitamin A, have been released.

Provitamin A from maize is efficiently absorbed and converted into vitamin A in the body.  Stores of Vitamin A in 5 to 7 year old children improved when they ate orange maize, according to HarvestPlus research. The study also shows preliminary data demonstrating that children who ate orange maize for six months experienced an improved capacity of the eye to adjust to dim light. The findings indicate an improvement in night vision, a function dependent on adequate levels of vitamin A in the body.

Efforts on this front have been a major focus in Latin America, especially in Nicaragua, Guatemala and Colombia. Scientists expect the first wave of high zinc hybrids and varieties will be released in 2017. Further efforts are starting in such countries as Zambia, Zimbabwe and Ethiopia. Results from the first nutrition studies in young rural Zambian children indicate that biofortified maize can meet zinc requirements and provide an effective dietary alternative to regular maize for the vulnerable population.

A modern quarantine facility will be set up in Zimbabwe to safely import materials and proactively breed for resistance against MLN.

A social media campaign initiated to celebrate the achievements of women has led to more than a dozen published blog story contributions about women in the maize and wheat sectors.