“CIMMYT is at my heart”

After a 37-year career, Hans-Joachim Braun is retiring from the International Maize and Wheat Improvement Center (CIMMYT). As the director of the Global Wheat Program and the CGIAR Research Program on Wheat, Braun’s legacy will resonate throughout halls, greenhouses and fields of wheat research worldwide.

We caught up with him to capture some of his career milestones, best travel stories, and vision for the future of CIMMYT and global wheat production. And, of course, his retirement plans in the German countryside.

Native to Germany, Braun moved to Mexico in 1981 to complete his PhD research at CIMMYT’s experimental station in Obrégon, in the state of Sonora. His research focused on identifying the optimum location to breed spring wheat for developing countries — and he found that Obrégon was in fact the ideal location.

His first posting with CIMMYT was in Turkey in 1985, as a breeder in the International Winter Wheat Improvement Program (IWWIP). This was the first CGIAR breeding program hosted by a CIMMYT co-operator, that later developed into the joint Turkey, CIMMYT and the International Center for Agricultural Research in the Dry Areas (ICARDA) winter wheat program. “In 1990, when the Commonwealth of Independent States was established, I saw this tremendous opportunity to work with Central Asia to develop better wheat varieties,” he said. “Today, IWWIP varieties are grown on nearly 3 million hectares.”

Although Braun was determined to become a wheat breeder, he never actually intended to spend his entire career with one institution. “Eventually I worked my entire career for CIMMYT. Not so usual anymore, but it was very rewarding. CIMMYT is at my heart; it is what I know.”

“Make the link to the unexpected”

One of Braun’s standout memories was a major discovery when he first came to Turkey.  When evaluating elite lines from outside the country — in particular lines from a similar environment in the Great Plains — his team noticed they were failing but nobody knew why.

Two of his colleagues had just returned from Australia, where research had recently identified micronutrient disorders in soil as a major constraint for cereal production. The team tried applying micro-nutrients to wheat plots, and it became crystal clear that zinc deficiency was the underlying cause. “Once aware that micro-nutrient disorders can cause severe growth problems, it was a minor step to identify boron toxicity as another issue. Looking back, it was so obvious. The cover picture of a FAO book on global soil analysis showed a rice field with zinc deficiency, and Turkey produces more boron than the rest of the world combined.”

“We tested the soil and found zinc deficiency was widespread, not just in the soils, but also in humans.” This led to a long-term cooperation with plant nutrition scientists from Cukurova University, now Sabanci University, in Istanbul.

But zinc deficiency did not explain all growth problems. Soil-borne diseases — cyst and lesion nematodes, and root and crown rot — were also widespread. In 1999, CIMMYT initiated a soil-borne disease screening program with Turkish colleagues that continues until today.  Over the coming decade, CIMMYT’s wheat program will make zinc a core trait and all lines will have at least 25% more zinc in the grain than currently grown varieties.

After 21 years in Turkey, Braun accepted the position as director of CIMMYT’s Global Wheat Program and moved back to Mexico.

Braun emphasized the importance of “mutual trust and connections,” especially with cooperators in the national agricultural research systems of partner countries. This strong global network contributed to another major milestone in CIMMYT wheat research: the rapid development and release of varieties with strong resistance to the virulent Ug99 race of wheat rust. This network, led by Cornell University, prevented a potential global wheat rust epidemic.

CIMMYT’s relationship with Mexico’s Ministry of Agriculture and the Obregón farmers union, the Patronato, is especially important to Braun.

In 1955, Patronato farmers made 200 hectares of land available, free if charge, to Norman Borlaug. The first farm community in the developing world to support research, it became CIMMYT’s principal wheat breeding experimental station: Norman Borlaug Experimental Station, or CENEB.  When Borlaug visited Obregón for the last time in 2009, the Patronato farmers had a big surprise.

“I was just getting out of the shower in my room in Obregón when I got a call from Jorge Artee Elias Calles, the president of the Patronato,” Braun recalls. “He said, ‘Hans, I’m really happy to inform you that Patronato decided to donate $1 million.’”

The donation, in honor of Borlaug’s lifetime of collaboration and global impact, was given for CIMMYT’s research on wheat diseases.

“This relationship and support from the Obregón farmers is really tremendous,” Braun says. “Obregón is a really special place to me. I am admittedly a little bit biased, because Obregón gave me a PhD.”

Braun’s decades of international research and travel has yielded just as many stories and adventures as it has high-impact wheat varieties.

He remembers seeing areas marked with red tape as he surveyed wheat fields in Afghanistan in the 1990s, and the shock and fear he felt when he was informed that they were uncleared landmine areas. “I was never more scared than in that moment, and I followed the footsteps of the guy in front of me exactly,” Braun recalls.

On a different trip to Afghanistan, Braun met a farmer who had struggled with a yellow rust epidemic and was now growing CIMMYT lines that were resistant to it.

“The difference between his field and his neighbors’ was so incredible. When he learned I had developed the variety he was so thankful. He wanted to invite me to his home for dinner. Interestingly, he called it Mexican wheat, as all modern varieties are called there, though it came from the winter wheat program in Turkey.”

Seeing the impact of CIMMYT’s work on farmers was always a highlight for Braun.

Braun considers wheat research to be still in a “blessed environment” because a culture of openly-shared germplasm, knowledge and information among the global wheat community is still the norm. “I only can hope this is maintained, because it is the basis for future wheat improvement.”

His pride in his program and colleagues is clear.

“How many programs worldwide have this expertise and meet the target criteria? The Global Wheat Program is unique — no other wheat breeding program has a comparable impact. Today, around 60 million hectares are sown with CIMMYT-derived wheat varieties, increasing the annual income of farmers by around $3 billion dollars. Not bad for an annual investment in breeding of around $25 million dollars. And I don’t take credit for CIMMYT only, this is achieved through the excellent collaboration we have with national programs.”

A bright future for wheat, and for Braun

After retirement, Braun is looking forward to settling in rural Inzlingen, Germany, and being surrounded by the beautiful countryside and mountains, alongside his wife Johanna. They look forward to skiing, running, e-biking and other leisure activities.

“One other thing I will try — though most people will not believe me because I’m famous for not cooking — but I am really looking into experimenting with flour and baking,” he says.

Despite his relaxing retirement plans, Braun hopes to continue to support wheat research, whether it is through CIMMYT or through long friendships with national partners, raising awareness of population growth, the “problem of all problems” in his view.

“We have today 300 million more hungry people than in 1985. The road to zero hunger in 2030 is long and will need substantial efforts. In 1970, Organization for Economic Co-Operation and Development (OECD) countries agreed to spend 0.7% of GDP on official development assistance. Today only 6 countries meet this target and the average of all OECD countries has never been higher than 0.4%. Something needs to change to end extreme poverty — and that on top of COVID-19. The demand for wheat is increasing, and at the same time the area under wheat cultivation needs to be reduced, a double challenge. We need a strong maize and wheat program. The world needs a strong CIMMYT.” 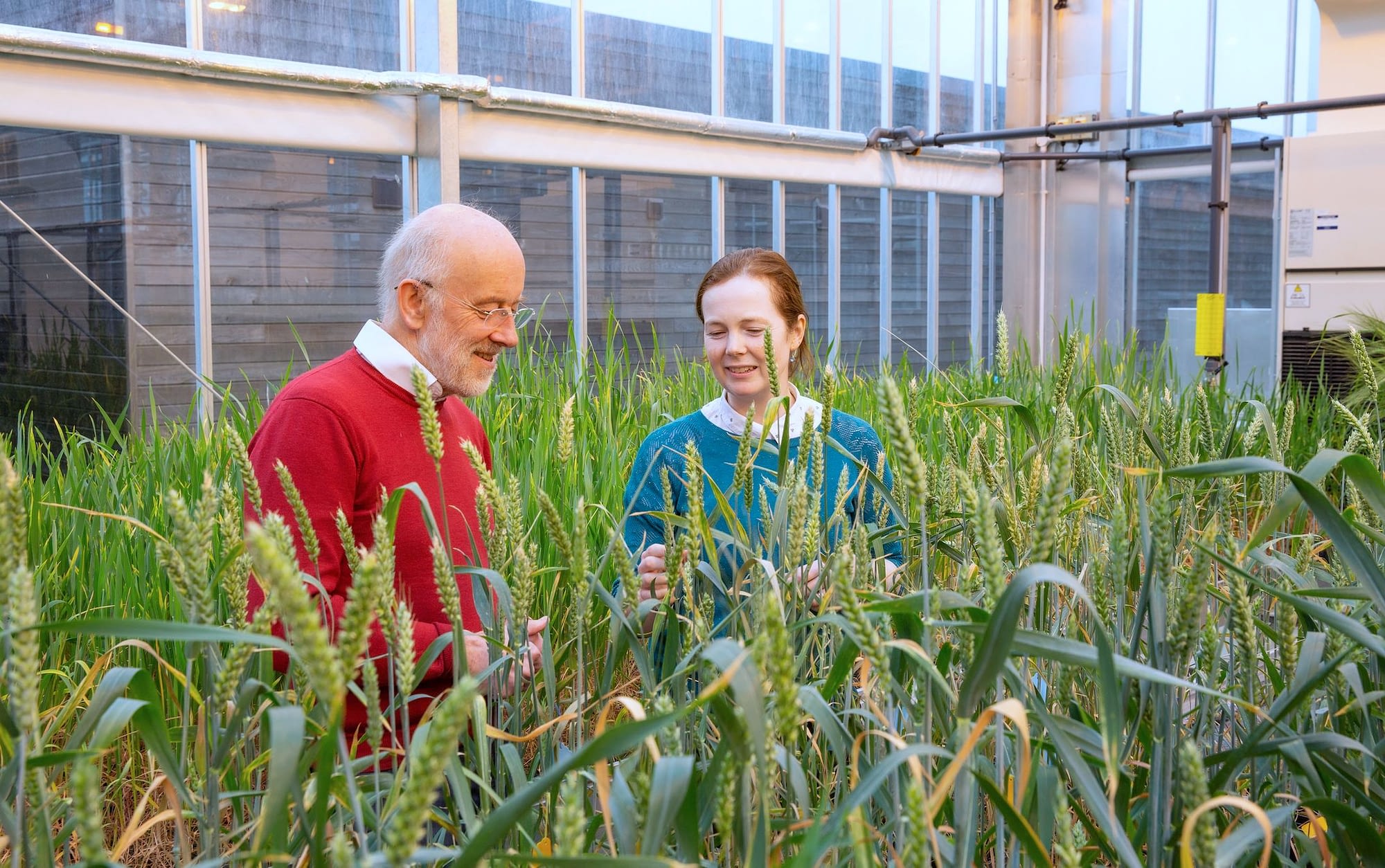