“The dream has become a reality.” These words by Victor Manuel Villalobos Arambula, Secretary of Agriculture and Rural Development of Mexico, summed up the sentiment felt among the attendees at the International Maize and Wheat Improvement Center (CIMMYT) Global Wheat Program Visitors’ Week in Ciudad Obregon, Sonora.

In support of the contributions to global and local agricultural programs, Villalobos spoke at the week’s field day, or “Dia de Campo,” in front of more than 200 CIMMYT staff and visitors hailing from more than 40 countries on March 20, 2019.

Villalobos recognized the immense work ahead in the realm of food security, but was optimistic that young scientists could carry on the legacy of Norman Borlaug by using the tools and lessons that he left behind. “It is important to multiply our efforts to be able to address and fulfill this tremendous demand on agriculture that we will face in the near future,” he stated.

Given the diversity of attendees and CIMMYT’s partnerships, it is no surprise that there were several high-level visits to the field day.

A high-level delegation from India, including Balwinder Singh Sidhu, commissioner of agriculture for the state of Punjab, AK Singh, deputy director general for agricultural extension at the Indian Council of Agricultural Research (ICAR), and AS Panwar, director of ICAR’s Indian Institute of Farming Systems Research, joined the tour and presentations. All are longtime CIMMYT collaborators on efforts to scale up and disseminate sustainable intensification and climate smart farming practices.

Panwar, who is working with CIMMYT and partners to develop typologies of Indian farming systems to more effectively promote climate smart practices, was particularly interested in the latest progress in biofortification.

“One of the main objectives of farming systems is to meet nutrition of the farming family. And these biofortified varieties can be integrated into farming systems,” he said.

In addition, a delegation from Tunisia, including dignitaries from Tunisia’s National Institute of Field Crops (INGC), signed a memorandum of understanding with CIMMYT officials to promote cooperation in research and development through exchange visits, consultations and joint studies in areas of mutual interest such as the diversification of production systems. INGC, which conducts research and development, training and dissemination of innovation in field crops, is already a strong partner in the CGIAR Research Program on Wheat’s Precision Phenotyping Platform for Wheat Septoria leaf blight.

At the close of the field day, CIMMYT wheat scientist Carolina Rivera was honored as one of the six recipients of the annual Jeanie Borlaug Laube Women in Triticum (WIT) Early Career Award. The award offers professional development opportunities for women working in wheat.   “Collectively, these scientists are emerging as leaders across the wheat community,” said Maricelis Acevedo, Associate Director for Science for Cornell University’s Delivering Genetic Gain in Wheat Project, who announced Rivera’s award.

CGIAR Research Program on Wheat and Global Wheat Program Director Hans Braun also took the opportunity to honor and thank three departing CIMMYT wheat scientists. Alexey Morgounov, Carlos Guzman and Mohammad Reza Jalal Kamali received Yaquis, or statues of a Yaqui Indian. The figure of the Yaqui Indian is a Sonoran symbol of beauty and the gifts of the natural world, and the highest recognition given by the Global Wheat Program.

The overarching thread that ran though the Visitor’s Week was that all were in attendance because of their desire to benefit the greater good through wheat science. As retired INIFAP director and Global Wheat Program Yaqui awardee Antonio Gándara said, recalling his parents’ guiding words, “Siempre, si puedes, hacer algo por los demas,  porque es la mejor forma de hacer algo por ti. [Always, if you can, do something for others, because it’s the best way to do something for yourself].” 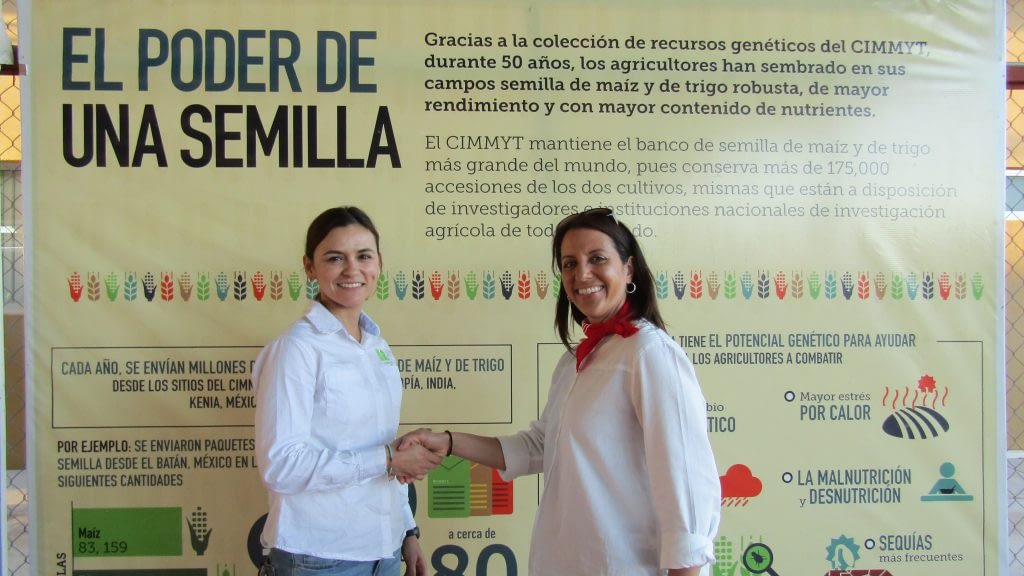 CIMMYT scientist Carolina Rivera is one of the six recipients of the 2019 Jeanie Borlaug Laube Women in Triticum (WIT) Early Career Award.