As the world heats up and water grows scarce, threatening the productivity of humankind’s preferred crops, breeder Marcela Carvalho Andrade and her colleagues at the International Maize and Wheat Improvement Center (CIMMYT) are working to toughen maize, drawing resilience traits from landraces, the forerunners of modern maize.

For decades, scientists have sought to utilize the hardiness of maize landraces, which evolved over millennia of farmer selection for adaptation to diverse and sometimes harsh local settings in Mexico, Central and South America.

But crossing elite varieties with landraces brings along wild traits that are difficult and costly to purge, including lower grain yields, excessive tallness or a tendency to fall over in strong winds. For this and for their genetic complexity, landraces are seldom used directly in breeding programs, according to Andrade.

Crosses that home in on genetically complex traits

“Our strategy is to cross selected landraces with elite maize lines, thus developing improved lines that can be directly incorporated and recycled in breeding programs,” explained Andrade, who joined CIMMYT in 2016.

The traits sought include better resilience under high temperatures, drought conditions or the attacks of rapidly-evolving crop diseases. “All these features will be critical for the future productivity of maize,” said Andrade.

One of the world’s three most important crops, maize contributes over 20% of the calories in human diets in 21 low-income countries, as well as being used in industry, biofuels, and feed for livestock and poultry.

Andrade and the maize breeding team develop new lines that carry a 75 percent genetic contribution from the elite source and 25 percent from a landrace. The aim she said is to get the good components from both sides, while broadening maize’s genetic diversity for use by breeders and ultimately farmers.

The resulting lines and hybrids are tested for yield, resilience and overall agronomic performance, under both normal growing conditions and “stressed” environments; for example, in plots grown at sites with high temperatures or reduced water availability.

“We can thus identify landraces that offer traits of interest, as well as generating improved breeding lines to strengthen the resilience of elite maize without reducing its yield,” said Andrade, noting that the research employs conventional cross-pollination and selection.

According to Andrade, CIMMYT has carried out large-scale molecular analysis of its maize seed collections, which number around 28,000 and comprise landraces from 70 countries.

“Over the past years, CIMMYT has used genetic diversity analyses of its maize collections to select landraces for use in drought tolerance breeding or for finding lines that are resistant to newly important diseases such as  Maize Lethal Necrosis or Tar Spot,” she explained. “Genetic diversity analysis allows us to narrow the number of candidate landrace sources that we need to cross and assess in the field.”

The viral disease Maize Lethal Necrosis (MLN) has devastated crops in eastern Africa since its appearance there in 2011.

The researchers have also found landrace sources of resilience against Tar Spot Complex, a maize disease of the Americas that can cause 50 percent or greater yield losses in infected crops.

Andrade said the breeding team expects to release a first wave of landrace-derived, improved maize lines in 2019, some featuring enhanced drought tolerance and others that provide better resistance to Tar Spot.

“The lines we offer will be freely available to breeders worldwide and must yield well and show superior resilience,” Andrade explained. “They will have reasonable agronomics—ear and plant height and standability, for example. The lines will not be perfect, but breeders won’t hesitate to use them because we’ve ensured that they are superior for at least one crucial trait and reasonably competitive for most other traits.”

From Brazil to the world

Growing up in a small town and having direct contact with her father’s dairy farm in Minas Gerais, a mainly rural state in Brazil, Andrade finds her CIMMYT work enormously satisfying. “My dad and a few uncles were farmers and complained some years that their crops didn’t yield well,” she says. “I knew I wanted to help them somehow.”

Andrade obtained Bachelor and Master’s degrees in agronomy/plant science from the Universidade Federal de Lavras (UFLA), one of Brazil’s premier institutions of higher education. She later completed a Doctorate in Genetics and Plant Breeding at UFLA, in partnership with Ohio State University.

She credits CIMMYT maize scientist Terry Molnar, her supervisor and mentor, with teaching her the complex ins and outs of maize breeding. “I am a plant breeder and worked previously with vegetables, but I learned the practical aspects of maize breeding from Terry.”

Looking ahead, Andrade sees herself continuing as a plant breeder. “I don’t see myself working in anything else. I would eventually like to lead my own program but, at this point in my career, I’m happy to help transfer landrace traits to modern maize varieties.” Toledo’s research is multidisciplinary — it involves genetics and breeding knowledge, as well as statistics and computer science. 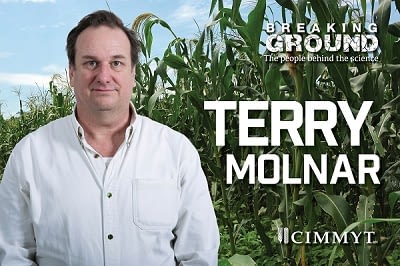