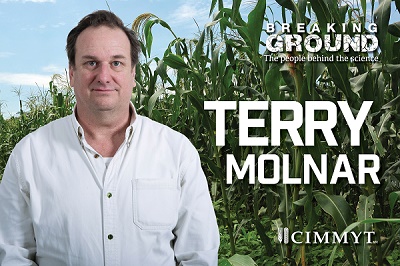 Increasingly erratic weather, poor soil health, and resource shortages brought on by climate change are challenging the ability of farmers in developing countries to harvest a surplus to sell or even to grow enough to feed their households. A healthy crop can mean the difference between poverty and prosperity, between hunger and food security.

Terry Molnar, a scientist at the International Maize and Wheat Improvement Center (CIMMYT), is helping farmers face these challenges by using the natural diversity of plants to unlock desirable genetic traits inside food crops.

Working at CIMMYT as a Maize Phenotyping and Breeding Specialist, Molnar studies the traits found in different maize varieties found in the CIMMYT seed collections that can be used to strengthen crops and produce healthy food and better livelihoods.

Growing up in New Mexico, in the United States of America, he had a unique opportunity to work with a conservation group preserving seed from Native American and Hispanic communities of northern New Mexico and southern Colorado.

“Seeing all the diversity there was in the maize, beans, chilies really inspired me to go into genetics and breeding as a career,” Molnar said. Following that inspiration, he earned his bachelor degree at Colorado State University and continued his Masters and doctoral studies at North Carolina State University with a focus on plant breeding.

At CIMMYT, he studies native maize varieties called landraces to identify useful traits such as resistance to heat and drought, which can be used to breed new varieties that help farmers produce more food despite mounting challenges.

The high level of native maize diversity is due to its varied geography and culture in Latin America where it originated. As farmers selected the best maize for their specific environments and uses, it diverged into distinct races. At present, there are over 300 recorded unique races of maize in Latin America alone.

“Our projects are trait-targeted, so the first step is to make educated guesses as to which of the landraces might be good for that trait. There are over 25,000 maize landraces varieties in the CIMMYT Maize Germplasm Bank and we don’t have the infrastructure or money to test them all.”

“We try to cast a wide net and evaluate as many landraces as we are able in the field under the conditions of interest. After this initial evaluation, I keep the best ones and start the breeding process,” Molnar said.

This involves crossing the landrace to elite maize lines that already have desirable traits like high yield, to develop new lines. The final step is to create hybrids from these new lines and evaluate them in yield trials. After several years of testing, anything that is better than the original lines for the trait of interest will be released to breeders and research scientists.

Climate change predictions suggest that in the coming decades, heat and drought will greatly increase in many important maize growing areas of the world. Molnar works to find tolerance traits for drought and heat within landrace maize plants. As well as becoming a growing problem in the future, drought and heat already affect farmers in any given year, he said.

As part of this work, Molnar also looks for landrace varieties with natural resistance to two prevalent maize diseases, tar spot complex (TSC) and maize lethal necrosis (MLN). TSC is an important disease in the southern half of Mexico, Central America and northern South America, and can decrease yields by 50 percent when it gets into fields early in a growing cycle. Most of the farmers in the affected areas are too poor to afford fungicides, so resistance built into varieties is very important. MLN is a large problem in eastern Africa.

“Like TSC, when MLN gets into fields early in the cycle the results can be devastating, with up to 100 percent potential yield loss,” said Molnar. “MLN is spread by insect vectors, and similar to the situation in Latin America, many farmers in east Africa are too poor or don’t have access to insecticides.”

The last trait Molnar looks for is pigmentation, specifically blue and red kernel color. This is part of an effort to develop new end-use markets in Mexico. Pigments in maize are due to increased concentrations of anthocyanin, an antioxidant, which has been connected to decreased cancer risk. Blue and red maize can be used for specialty food products or for industrial use such as the extraction of natural colors for use in other food products. In both cases, the pigmented maize commands a higher price for the farmer and gives them access to new markets.

Molnar finds great satisfaction in his work, both from the difference he makes in farmers’ lives, and from the process of finding the traits in the first place.

“I enjoy being out in the field, looking at maize, meeting and talking to farmers and working with my collaborators,” Molnar said. “I’m fascinated by the incredible variety that exists in maize and its ability to grow almost everywhere under most environmental conditions. Before the Europeans came, maize was already growing from Canada to Chile and from sea level to over 3000 meters in altitude and from the humid tropics to bone-dry desert. It’s an incredibly adaptable species.”

He is motivated by the passion to promote the rich variety of traits found in native maize varieties.

“I’m driven by the doubt of others. A lot of maize breeders working at the private seed companies don’t believe it is possible to derive anything commercially useful out of a landrace since modern hybrid maize has been bred for so long and is now so elite. I would like to prove them wrong,” he said.