Despite efforts to develop wheat resistant to stem, stripe and leaf rusts, the diseases will continue to thwart scientists, making ongoing funding vital, a top economist has said. 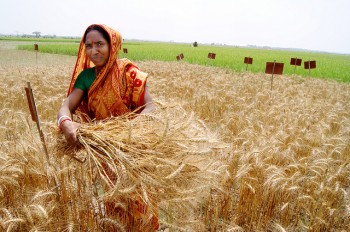 If we are to be truly successful in improving the lives of farmers and consumers in the developing world, we need to base our interventions on the best evidence available.

The first heat tolerant maize hybrids are licensed for deployment in Bangladesh, India and Nepal

Value of CGIAR wheat estimated at up to $3.8 billion a year, research shows

Wheat bred by the CGIAR consortium of agricultural researchers has a huge global reach.

A farm budgeting booklet and training empower women with knowledge so they are able to make decisions and increase their family income.

The CGIAR Research Program on MAIZE, CIMMYT and IITA are pleased to announce that as of 1 June 2015, the MAIZE CRP has been led by the former Director of CIMMYT’s Global Maize Program, who will now spearhead the CGIAR’s international maize research agenda. The CIMMYT Board, upon endorsement by the MAIZE Stakeholder Advisory Committee (StAC), has agreed to the CIMMYT Director General appointing Dr. B.M. Prasanna as MAIZE CRP Director.

Innovation and technology
Features 29 May 2015

A testament to increased climate variability and risk for farming systems already operating on the razor’s edge, the 2014-15 cropping season will be recognized as a sad write-off by most farmers in Central Mozambique. The rains started six weeks late and most of the rainfall fell in only two months (normally it’s distributed over four), followed by a long drought and some few showers at the end.

Over the last week, MAIZE and WHEAT CRP investigators from the global cross-CRP study on gender in agricultural innovation met at El Batán from 26 Feb to 1 March to take stock of progress so far and plan the next steps in the implementation of this unique research initiative.