What is green manure? And how is it helping maize farmers?

Ten farmers in a hot and dry area of Zimbabwe trial intercropping legumes and green manure cover crops alongside their maize, to assess their impact on soil fertility.

Honest Musafari, a fifty-year-old farmer from rural Zimbabwe, eagerly picks up a clump of soil from his recently harvested field to show how dark and fertile it is. A farmer all his life, Musafari explains the soil has not always been like this. For years, he and his neighbors had to deal with poor eroding soil that increasingly dampened maize yields.

“My soil was getting poorer each time I plowed my field, but since I stopped plowing, left the crop residues and planted maize together with legumes the soil is much healthier,” says Musafari. His 1.6-hectare maize-based farm, in the Murehwa district, supports his family of six.

For over two years, Musafari has been one of the ten farmers in this hot and dry area of Zimbabwe to trial intercropping legumes and green manure cover crops alongside their maize, to assess their impact on soil fertility.

The on-farm trials are part of efforts led by the International Maize and Wheat Improvement Center (CIMMYT) in collaboration with Catholic Relief Services (CRS) and government extension services to promote climate-resilient cropping systems in sub-Saharan Africa.

“Over 65 percent of soils in Africa are degraded. They lack the nutrients needed for productive crops. This is a major part of the reason why the region’s maize yields are not increasing,” he explains. “The failure to address poor soil health will have a disastrous effect on feeding the region’s growing population.”

The area where Musafari lives was chosen to test intercropping, along with others in Malawi and Zambia, for their infamous poor soils.

Planted in proximity to maize, legumes — like pigeon pea, lablab and jack beans — add nitrogen to the soil, acting as green manure as they grow, says Thierfelder. Essentially, they replace the nutrients being used by the cereal plant and are an accessible form of fertilizer for farmers who cannot afford mineral fertilizers to improve soil fertility.

“Our trials show legumes are a win for resource poor family farmers. Providing potentially 5 to 50 tons per hectare of extra organic matter besides ground cover and fodder,” he notes. “They leave 50 to 350 kg per hectare of residual nitrogen in the soil and do not need extra fertilizer to grow.”

Added to the principles of conservation agriculture — defined by minimal soil disturbance, crop residue retention and diversification through crop rotation and intercropping — farmers are well on their way to building a resilient farm system, says Geoffrey Heinrich, a senior technical advisor for agriculture with CRS working to promote farmer adoption of green manure cover crops.

For years Musafari, as many other smallholder farmers in Africa, tilled the land to prepare it for planting, using plows to mix weeds and crop residues back into the soil. However, this intensive digging has damaged soil structure, destroyed most of the organic matter, reduced its ability to hold moisture and caused wind and water erosion.

Letting the plants do the work

Musafari says the high price of mineral fertilizer puts it out of reach for farmers in his community. They only buy little amounts when they have spare cash, which is never enough to get its full benefit.

He was at first skeptical green manure cover crops could improve the quality of his soil or maize yields, he explains. However, he thought it was worth a try, considering growing different crops on the same plot would provide his family with more food and the opportunity to make some extra cash.

“I’m glad I tried intercropping. Every legume I intercropped with my maize improved the soil structure, its ability to capture rain water and also improved the health of my maize,” he says.

Thierfelder describes how this happens. Nitrogen fixation, which is unique to leguminous crops, is a very important process for improving soil fertility. This process involves bacteria in the soil and nitrogen in the air. The bacteria form small growths on the plant roots, called nodules, and capture the atmospheric nitrogen as it enters the soil. The nodules change the nitrogen into ammonia, a form of nitrogen plants use to produce protein.

In addition, legumes grown as a cover crop keep soil protected from heavy rains and strong winds and their roots hold the soil in place, the agronomist explains. They conserve soil moisture, suppress weeds and provide fodder for animals and new sources of food for consumption or sale.

Working with CIMMYT, Musafari and his wife divided a part of their farm into eight 20 by 10 meter plots. On each plot, they intercropped maize with a different legume: cowpea, jack bean, lablab, pigeon pea, sugar bean and velvet bean. They also tried intercropping with two legumes on one of the plots. Then they compared all those options to growing maize alone.

“Season by season the soil on each of the trial plots has got darker and my maize healthier,” describes Musafari. “Rains used to come and wash away the soil, but now we don’t plow or dig holes, so the soil is not being washed away; it holds the water.”

“I really like how the legumes have reduced the weeds. Before we had a major problem with witchweed, which is common in poor soils, but now it’s gone,” he adds.

Since the first season of the trial, Musafari’s maize yields have almost tripled. The first season his maize harvested 11 bags, or half a ton, and two seasons later it has increased to 32 bags, or 1.5 tons.

Musafari’s wife Eveline has also been convinced about the benefits of intercropping, expressing the family now wants to extend it to the whole farm. “Intercropping has more advantages than just growing maize. We get different types of food on the same space. We have more to eat and more to sell,” she says.

The family prefers intercropping with jack bean and lablab. Even though they were among the hardest legumes to sell, they improved the soil the most. They also mature at the same time as their maize, so they save labor as they only have to harvest once.

The benefits gained during intercropping have influenced farmers to adopt it as part of their farming practices at most of our trial sites across southern Africa, CRS’s Heinrich says.

“Immediate benefits, such as reduced weeding labor and legume cash crops that farmers can sell off quick, provide a good incentive for adoption,” he adds.

Food security is at the heart of Africa’s development agenda. However, climate change is threatening the Malabo Commitment to end hunger in the continent by 2025. Temperatures are increasing: the past three decades have been the warmest on record, according to the International Panel on Climate Change.

Hotter climates, more dry spells and erratic rainfall are a major concern to farmers in sub-Saharan Africa, where over half of maize is grown in rain-fed farming without irrigation.

The majority of African farmers are smallholders who cultivate less than 2 hectares, explains Thierfelder. If they are to meet the food demand of a population set to almost double by 2050, bringing it to over 2 billion people while overcoming multiple challenges, they need much more productive and climate-resilient cropping systems.

New research identifies that the defining principles of conservation agriculture alone are not enough to shield farmers from the impacts of climate change. Complementary practices are required to make climate-resilient farming systems more functional for smallholder farmers in the short and long term, he warns.

“Intercropping with legumes is one complementary practice which can help building healthy soils that stand up to erratic weather,” says Thierfelder. “CIMMYT promotes climate-resilient cropping systems that are tailored to farmers’ needs,” he emphasizes.

“To sustainably intensify farms, growers need to implement a variety of options including intercropping, using improved crop varieties resistant to heat and drought and efficient planting using mechanization along with the principles of conservation agriculture to obtain the best results.” 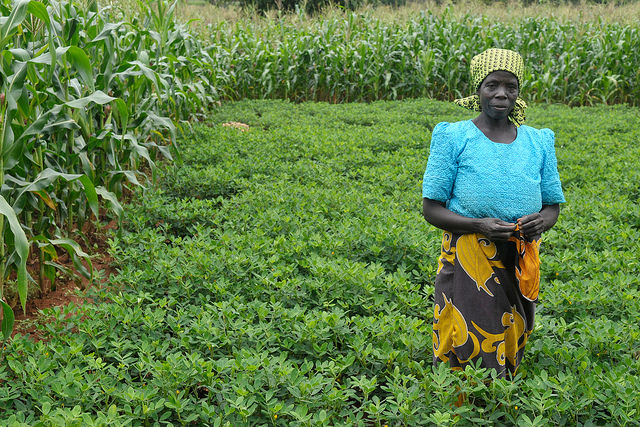