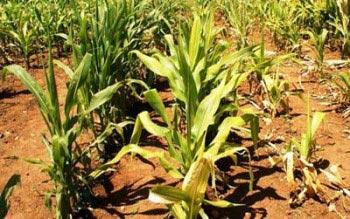 The maize lethal necrosis (MLN) disease first appeared in Kenya’s Rift Valley in 2011 and quickly spread to other parts of Kenya, as well as to Uganda and Tanzania. Caused by a synergistic interplay of maize chlorotic mottle virus (MCMV) and any of the cereal viruses in the family, Potyviridae, such as Sugarcane mosaic virus (SCMV), Maize dwarf mosaic virus (MDMV), or Wheat streak mosaic virus (WSMV), MLN can cause total crop loss if not controlled effectively.

A regional workshop on MLN and the control strategies was organized by CIMMYT and KARI during February 12-14, 2013 in Nairobi, which was attended by some 70 scientists, seed company breeders and managers, and representatives of ministries of agriculture and regulatory authorities in Kenya, Uganda, Tanzania, and the USA. The Workshop led to identification of important action points steps for effectively controlling the disease.

CIMMYT scientists have been working closely with virology experts from USDA-ARS and Kenya Agricultural Research Institute (KARI) to develop suitable protocols for testing the responses of maize germplasm against MLN, and to identify promising inbred lines and hybrids with resistance to MLN. During the 2012-2013 crop season, the CIMMYT-KARI team undertook extensive screening of inbred lines, pre-commercial and commercial hybrids in Naivasha and Narok in Kenya, under high natural disease pressure and artificial inoculation, respectively.

The details of the promising CIMMYT elite inbred lines and pre-commercial hybrids against MLN are presented in Table 1 and Table 2, respectively. The results presented in Table 1 are based on evaluation of CIMMYT inbred lines in four independent trials, two under artificial inoculation (Narok) and two under natural disease pressure (Naivasha) during 2012-2013. In each trial, entries were replicated (minimum two), and MLN severity scores (on a 1-5 scale basis) were recorded three or more times during the crop cycle, from the vegetative to the reproductive stage. The highest average MLN severity score (max. MLN score), recorded at any stage during the trial, is presented as representative of a given entry.

The data must be critically assessed and cautiously used by stakeholders and partners. More weight should be given to data from artificially inoculated trials, since trials under natural disease pressure are more liable to ‘disease escapes’ and identification of false positives. Caution must be exercised when using specific lines identified as potentially resistant (R) or moderately resistant (MR), especially when classification is based on data from only one trial (even under artificial inoculation). Please note that in such cases, the responses of the lines need to be validated by CIMMYT through further trials.

CIMMYT is working closely with both public and private sector partners to significantly expand the MLN evaluation network capacity in eastern Africa, and will continue the intensive efforts to identify/develop and deliver new sources of resistance to MLN.

For further information on:
MLN research-for-development efforts undertaken by CIMMYT, please contact: Dr BM Prasanna, Director, Global Maize Program, CIMMYT, Nairobi, Kenya; Email: b.m.prasanna@cgiar.org.
Availability of seed material of the promising lines and pre-commercial hybrids, please contact: Dr Mosisa Regasa (m.regasa@cgiar.org) if your institution is based in eastern Africa, or Dr James Gethi (j.gethi@cgiar.org) if your institution is based in southern Africa or outside eastern and southern Africa. 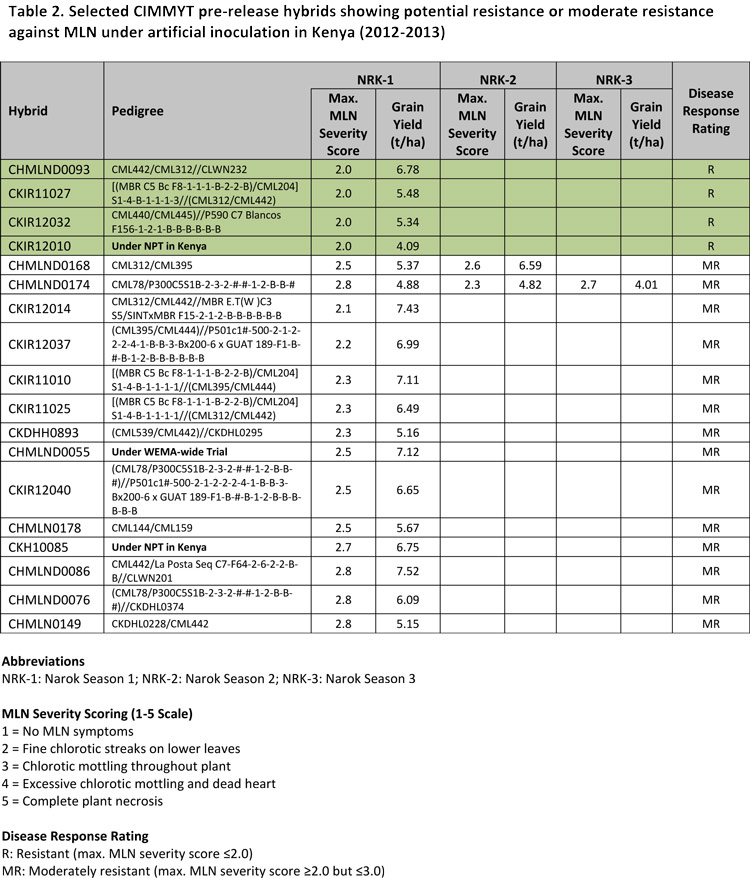