More than 40% of the global agricultural labor force is made up of women, and in the least developed countries, two in three women are employed in farming.

More than 40% of the global agricultural labor force is made up of women, and in the least developed countries, two in three women are employed in farming. Yet, despite being the largest contributors to this sector, women’s potential as farmers, producers and entrepreneurs is frequently untapped due to gender inequalities, limited access to farming assets and inputs, low participation in decision-making spaces, and lack of financing and capacity-building opportunities.

Tackling these gendered barriers is critical not only to help women achieve their highest economic potential, but also to feed an increasingly hungry world. Before this year’s Women’s History Month comes to an end, read the stories of three Bangladeshi women—Begum, Akter and Rani—to find out how the International Maize and Wheat Improvement Center (CIMMYT) are empowering them to become decision-makers in their communities, learn new skills and knowledge to boost their incomes, and advocate for bending gender norms across the country.

Rina Begum lives in Faridpur, a major commercial hub in southern Bangladesh. Before starting a business, her financial situation was precarious. Her primary source of income was her husband’s work as a day laborer, which brought in very little money. This, coupled with the lack of job security, made it hard to support a family.

About five years ago, Begum’s interest in agricultural mechanization was ignited by the farmers in her town, who were earning extra money by investing in farm machinery and hiring it out. Her first foray into the business world was buying a shallow irrigation pump and setting herself up as a service provider. Next, she saw her neighbor using a power tiller operated seeder and decided to try one out for herself. Finally, after taking part in a potential machinery buyer program run by CIMMYT under the Cereal Systems Initiative for South Asia – Mechanization and Irrigation (CSISA-MEA) and funded by USAID, she took the bold step of purchasing a seeder and adding it to her inventory of machines available for hire.

While her husband learned to operate the seeder, Begum put her business and accounting skills to good use, taking on an essential role in what ended up being the family business and establishing herself as an entrepreneur. Her work defied the established social norms, as she regularly interacted with the mechanics and farmers who came to her for mechanized services. Moreover, she occasionally stepped up alongside her husband to repair and maintain the machines. All this earned Begum a reputation as an experienced service provider, operator and mechanic, and turned her into a decision-maker and a role model to her family and community.

In 2021, Begum used her business profits to pick up the bill for her daughter’s marriage. “I know this job inside-out now,” she says, “and I’m really proud to have paid for the wedding myself.”

This taste of success fueled Begum’s appetite to expand the business even further, pushing her to take part in another training offered by CIMMYT, this time in mat-seedling production. Moreover, Begum, who plans to grow seedlings to sell on to rice farmers this year, has applied for a government subsidy to buy a rice transplanter, which can be hired out for use with mat-seedlings, and increase her stock of agricultural machinery.

At age 18, Nilufar Akter (pictured top) passed her high school certificate and soon after married Rezaul Karim, the owner of a light engineering workshop in Bogura, a city in northern Bangladesh, that manufactures agricultural machinery parts, with a workforce mainly composed of men. Akter’s ambition was to go out into the workplace and make her own money, so when Karim asked her to work alongside him, she agreed and soon became a valuable part of the business. Her primary responsibilities were inventory management and marketing, as well as business management, which she found more difficult.

Reza Engineering Workshop began working with CIMMYT in 2020 as part of CSISA-MEA, an initiative that supports light engineering workshops in Bangladesh with staff development, access to finance, management, and business growth. Under this project, CIMMYT organized a management training at the Bangladesh Agriculture Research Institute (BARI), which Akter attended. With the confidence these new skills gave her, she went back to the workshop and introduced a few changes, including building a computerized finance management system and updating the stack management. Moreover, she also established a dedicated restroom for female employees.

“We need human resources to maintain things in the business—and women can do a fantastic job”, Akter says. “We had no idea what good source of strength women workers would be for the factory. Therefore, if we provided them with adequate facilities, we could create jobs for many women who really need them”, she adds.

Akter’s current priorities are workshop safety and occupational health, two issues she’s tackling using the knowledge she learned in the CIMMYT training. Recently, she’s created some occupational health and safety posters, and established a series of workshop rules. “I used to think I wasn’t cut out for light engineering because it was primarily male-dominated, but I was mistaken”, Akter confesses. “This industry has a lot to offer to women, and I’m excited at the prospect of hiring more of them”, she adds.

Monika Rani lives in Khoshalpur, a village located in Dinajpur district in northern Bangladesh, with her husband Liton Chandra Roy and their two-year-old child. They farm just a quarter of a hectare of land, and Liton supplements their income with occasional wages earned as a day laborer.

Rani was looking for ways to increase their income so they could give their children an education and a better life. During last year’s boro rice-growing season (December to May), she and her husband joined the premium grade rice production team of CIMMYT as part of CSISA-MEA. The market value and yield of premium quality rice is greater than other types, so when Rani heard that she could make more money producing that variety, she decided to make a start right away. CIMMYT provided her with five kgs of premium seed for the 2021-22 winter season and trained her in premium quality rice production technology and marketing, which she followed to the letter.

Through hard work and persistence, Rani and her husband avoided the need to hire any additional labor and were rewarded with the maximum yield possible. She dried the premium quality rice grain according to buyer demand and sold 1,600 kgs, in addition to 140 kgs to farmers in her town.

“Knowing about premium quality rice production has tremendously changed my future for the better,” Rani explains. “I had no idea that, through my own hard effort, I could have a better life”, she added.

Cover photo: Nilufar Akter is using the knowledge she gained in CIMMYT training to focus on workshop safety and occupational health in her business. 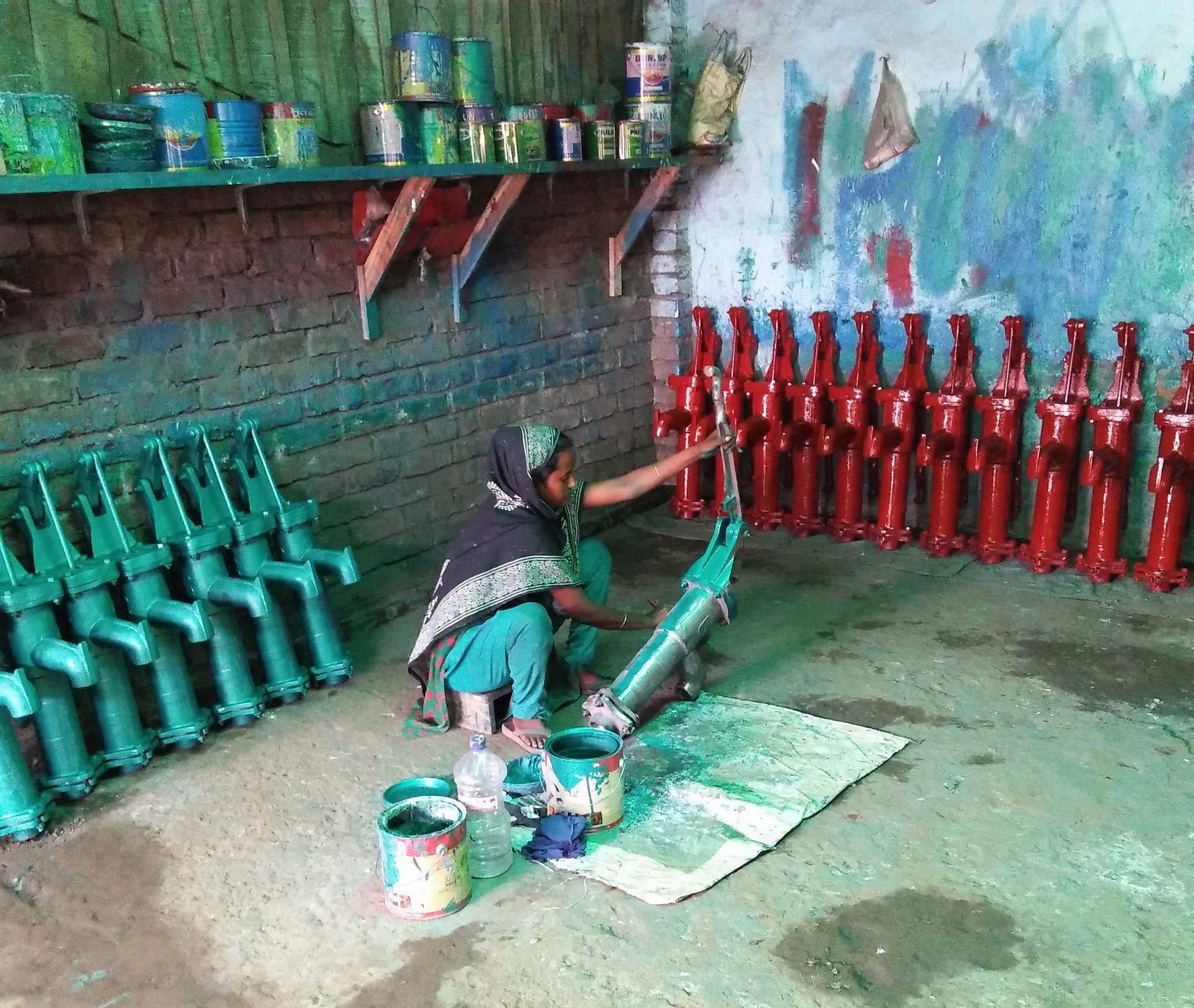 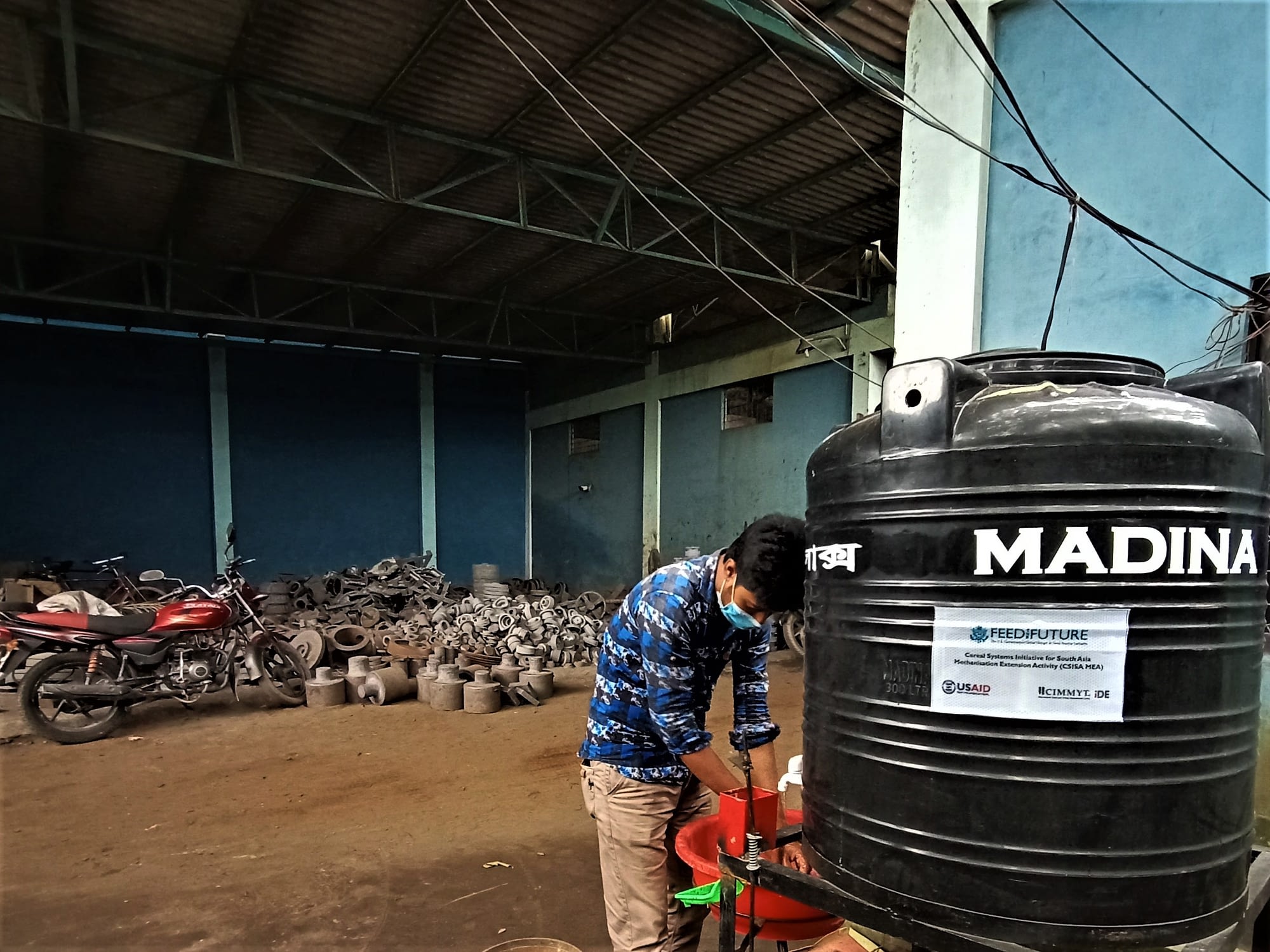 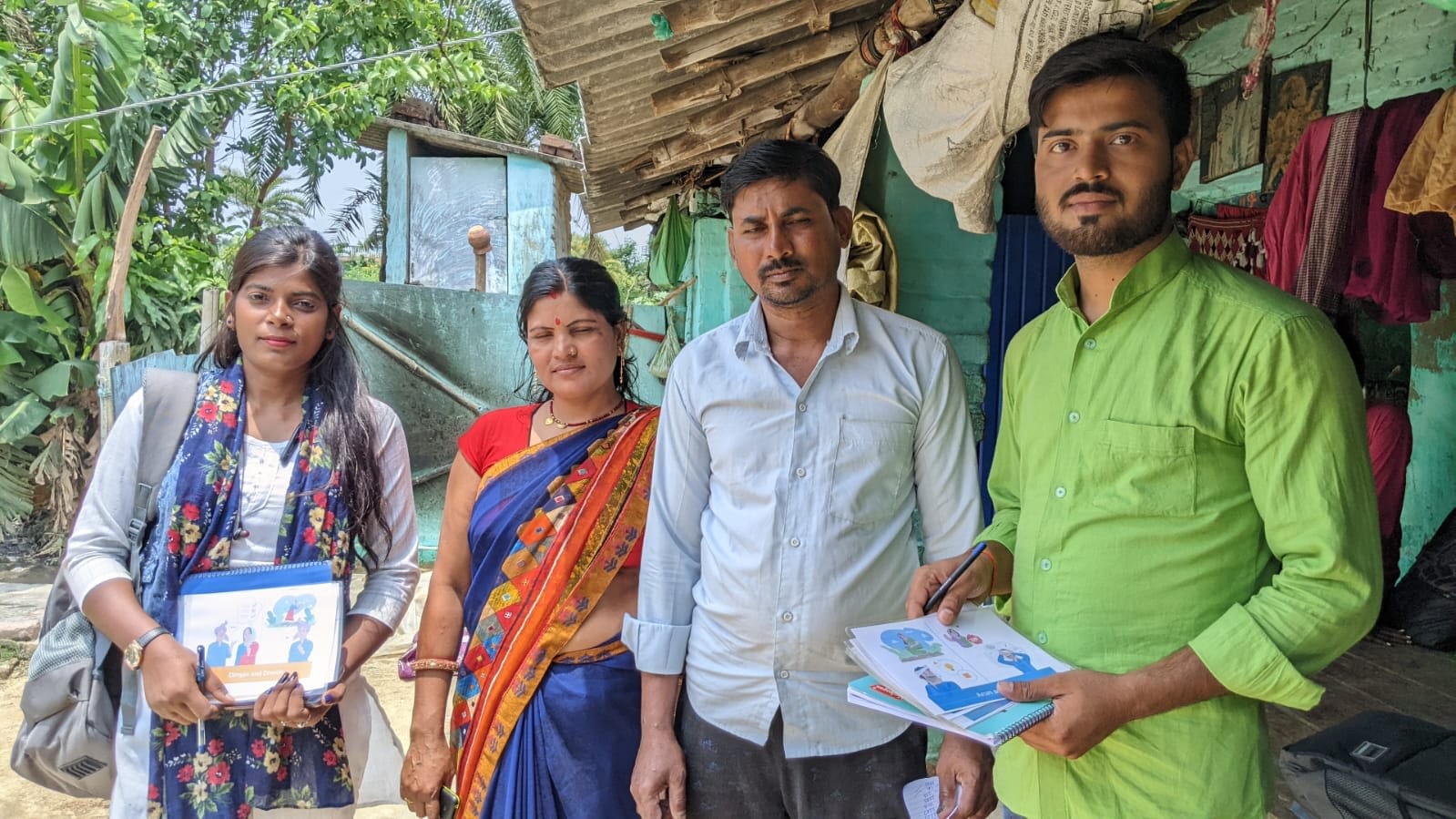