Post-doctoral fellow Soumya Gupta is the winner of the inaugural Paula Kantor Award for Excellence in Field Research, the International Centre for Research on Women announces. 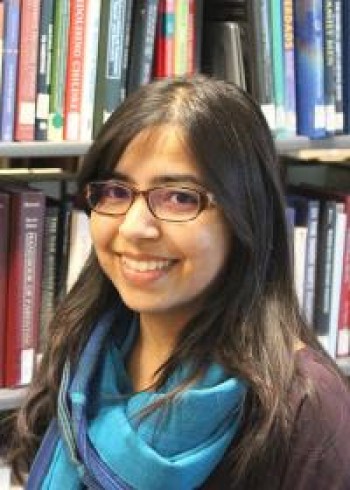 El BATAN, Mexico (CIMMYT) – Post-doctoral fellow Soumya Gupta is the winner of the inaugural Paula Kantor Award for Excellence in Field Research, the International Center for Research on Women (ICRW) announced on Thursday.

Gupta was recognized for research that “systematically and empirically assesses the empowerment of women in India as it relates to agricultural determinants and nutritional outcomes,” the group said in a statement.

The ICRW praised Gupta’s doctoral research at Cornell University for revealing that when women are empowered, they are better positioned to make their own choices in agriculture and help influence their own nutritional outcomes.

Gupta’s research showed that while diversification of production systems and diets is an important pathway to improved nutrition, the outcome is conditional on women’s status, the statement said.

“I could not imagine a more deserving researcher upon which to bestow the honor of the inaugural Paula Kantor Award,” said ICRW President Sarah Degnan Kambou. “Dr. Gupta’s work truly embodies the spirit and passion that Paula brought to her work every day. I see so many parallels between the important work that Paula was doing to better integrate gender into agriculture and rural development and Dr. Gupta’s field research.”

This is the first year that ICRW bestowed the award, which was designed to honor the legacy of the group’s former colleague Paula Kantor who died at age 46 in the aftermath of a Taliban attack in Pakistan last year.

At the time of her death, the prolific gender and development specialist was working at the Mexico-based International Maize and Wheat Improvement Center (CIMMYT) on a project focused on understanding the role of gender in the livelihoods of people in major wheat-growing areas of Afghanistan, Ethiopia and Pakistan.

Kantor was widely recognized in the international development community as an established and respected professional and writer, who pushed the realms of gender research to engage men more effectively. She published more than a dozen peer-reviewed academic publications, 10 peer-reviewed monographs and briefs, 15 other publications and 10 conference papers during her lifetime.

“I am honored to be the first recipient of the Paula Kantor Award,” Gupta said. “There is a great need for better data (and metrics) in the field of agriculture, nutrition and women’s empowerment. In light of that, the Paula Kantor Award acknowledges the importance of gathering primary data for evidence-based research.”

“At the same time the award also recognizes the tremendous effort that goes into designing a field-based data collection activity that is methodologically robust, contextually relevant, and ethically sound,” she said.

“I am inspired by Paula’s work and life, and with this award look forward to continuing my research on the linkages between nutrition and agriculture with a focus on women’s empowerment, and contributing to policy reform in a meaningful way.”

Gupta will receive a commemorative plaque  and the opportunity to meet with organizations, government officials, leaders of non-governmental organizations, and others in Delhi to discuss her work and the importance of understanding the connections between women’s empowerment, agricultural practices and nutritional outcomes.

A new award recognizes contributions to the livelihoods and economic empowerment of women made by a former giant in the field of international gender research.