The race to feed the world by 2050: implications for international agricultural research

Which competing trend will win out in the end?

The good news: by 2050, world population growth will likely fall to half or less the rate of 1.7% per year witnessed over the last half of the 20th century, offering a glimmer of hope for humanity to feed itself sustainably. More troubling though is that agricultural productivity growth is also slowing in many parts of the world, often because of declining investments in farm productivity-oriented research and political indifference. Which competing trend will win out in the end?

Attempting to answer this critical question and shed light on the causes, Philip G. Pardey, Professor of Science and Technology Policy, University of Minnesota, spoke to a global gathering of CIMMYT scientists in Mexico on 15 June. His presentation gave evidence and conclusions from recently published research1 to develop and apply the new “International Agricultural Prospects” model that projects global agricultural consumption and production to 2050.

Looking at U.S. trends over the 20th Century, Pardey said that agricultural productivity grew quickly until 1990 but the pace of growth slowed afterwards by more than half. “Data from 1910 show a curvilinear trend featuring a productivity surge in the 1950s-70s,” he explained. “This U.S. surge might be illustrative of a more general one-time phenomenon in many agricultural economies around the world. This includes widespread uptake of agricultural chemicals, improved seeds, fertilizer and other modern inputs, and a massive movement of labor out of the sector.” The implication, he said, was a need to double down on sustainable agricultural productivity growth including giving increased attention to research that maintains past productivity gains.

Other conclusions from Pardey included:

Regarding consumption, the model factored in consumption of biofuels, human food and animal feed, while considering changes in population growth, per capita income, and demographics — most notably the aging of the planet’s population. “We expect worldwide average per capita incomes in 2050 to be at the levels of more prosperous countries in 2000, but with a big spread among regions of the world,” said Pardey. “There will be encouraging reductions in people below the poverty line, but major clusters of the poor will persist in South Asia and Sub-Saharan Africa.” He also observed that increased life expectancies and numbers of the elderly in countries like China would reduce the demand for calories and change the structure of diets.

The driving factors used to forecast production included the pace of crop yield growth in different regions around the world, the location and availability of agricultural land, and its agro-ecological suitability for growing specific crops. “In the U.S., the ‘average’ maize plant has moved 279 kilometers north and 342 kilometers west since 1910,” he explained. “From 16 to 21 percent of the growth in U.S. maize output is attributable to this movement.”

[1] See A Bounds Analysis of World Food Futures: Global Agriculture Through to 2050 and The International Agricultural Prospects Model: Assessing Consumption and Production Futures Through 2050 (version 2.1). 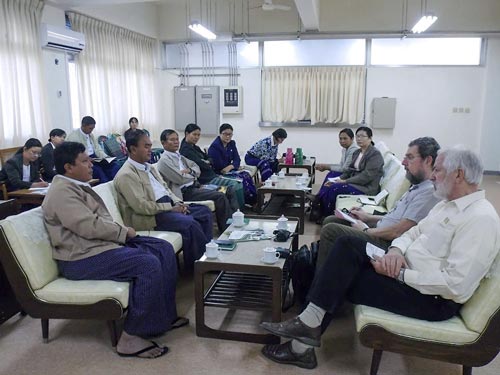