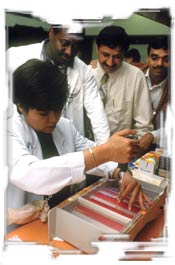 A USAID-funded study by Rutgers economist Carl Pray concludes that present and future impacts of the Asian Maize Biotechnology Network (AMBIONET)—a forum that during 1998-2005 fostered the use of biotechnology to boost maize yields in Asia’s developing countries—should produce benefits that far exceed its cost.

Organized by CIMMYT and funded chiefly by the Asian Development Bank (ADB), AMBIONET included public maize research institutions in China, India, Indonesia, the Philippines, Thailand, and Vietnam. “Despite the small investment—about US$ 2.4 million from ADB and US$ 1.3 million from CIMMYT—the network was successful in increasing research capacity, increasing research output, and initiating the development of technology that should benefit small farmers and consumers,” Pray says.

Benefits already seen in the field, with more to come

Pray estimates that farmers in Thailand and Southern China are already gaining nearly US$ 200,000 a year by sowing downy-mildew-resistant hybrids from the project. Pray’s future projections are much more dramatic. An example is drought tolerant maize: if such varieties are adopted on just a third of Asia’s maize area and reduce crop losses by one-third, farmers stand to gain US$ 100 million a year. Furthermore, in India AMBIONET has improved knowledge, capacity, and partnerships with private companies; a 1% increase in yield growth from this improvement would provide US$ 10 million per year, according to Pray.

Emphasis on applied work pays off

AMBIONET’s applied approach stressed formal training and attracted Asian researchers to work on maize germplasm enhancement and breeding. This included graduate students, scientists who switched from an academic to an applied-research focus, and advanced-degree scientists with experience in DNA markers and mapping for maize. Many noted that the partnering of molecular geneticists with breeders strengthened their interactions and the exchange of expertise. The project also boosted funding for maize breeding research. Several AMBIONET labs used project money to leverage significant institutional and government grants. Major research programs emerged from AMBIONET in India and China.

In a 2003 interview, Shihuang Zhang, leader of a project team at the Chinese Academy of Agricultural Sciences’ (CAAS) Institute of Plant Breeding, said: “AMBIONET came along at the ideal time for us. We were able have some of our young people trained and start our lab. Then in 1998 and 1999, China changed the way research was funded. We…were able to get big projects for molecular breeding.” The CAAS group used the initial money, equipment, training, and advice from AMBIONET to start the fingerprinting, mapping, and a markers lab, as well as to hire leading national maize breeding and molecular genetics experts. According to Pray, this eventually converted the group into China’s major maize molecular breeding and enhancement program.

Benefits were not confined just to individual labs, as groups shared knowledge and resources across borders. The Indonesian team, for example, sent two young scientists for extended training in the laboratory of B.M. Prasanna, at the Indian Agricultural Research Institute in New Delhi. Veteran Indonesian maize breeder Firdaus Kasim reported this to be extremely useful: “Prasanna showed our scientists how to do downy mildew and genetic diversity research. He was a very good teacher. After they came back they made a lot of progress.” Prasanna also provided lines that the Indonesian trainees fingerprinted in diversity studies and 400 primers (markers) for downy mildew resistance.

Lines, data, and markers from AMBIONET are in use region-wide. For example, sugarcane mosaic virus was identified as a serious constraint in several countries, and partners are using resistant lines developed under AMBIONET. Based on information from diversity studies conducted under the project, Vietnamese researchers are developing hybrids that resist lodging and are drought tolerant.

A regional program that worked

Research projects provided the focal point for AMBIONET, with training activities, annually meetings, and the technical backstopping contributing to the programs’ success. “The combination of collaboration, cooperation, and competition…was impressive,” says Pray, in the study’s closing statement. “This is the way good, collaborative research is supposed to work.”