The most essential nutrient in global crop production is also one of the most challenging to work with.

Nitrogen is the most essential nutrient in crop production but also one of the most challenging to work with. The compound is central to global crop production — particularly for major cereals — but while many parts of the world do not have enough to achieve food and nutrition security, in others excess nitrogen from fertilizer leaks into the environment with damaging consequences.

Around 78% of the Earth’s atmosphere is made up of nitrogen gas or N2 — a molecule made of two nitrogen atoms glued together by a stable, triple bond.

Though it makes up a large portion of the air we breathe, most living organisms can’t access it in this form. Atmospheric nitrogen must go through a natural process called nitrogen fixation to transform before it can be used for plant nutrition.

Why do plants need nitrogen?

In both plants and humans, nitrogen is used to make amino acids — which make the proteins that construct cells — and is one of the building blocks for DNA. It is also essential for plant growth because it is a major component of chlorophyll, the compound by which plants use sunlight energy to produce sugars from water and carbon dioxide (photosynthesis).

The nitrogen cycle is the process through which nitrogen moves from the atmosphere to earth, through soils and is released back into the atmosphere — converting in and out of its organic and inorganic forms.

It begins with biological nitrogen fixation, which occurs when nitrogen-fixing bacteria that live in the root nodules of legumes convert organic matter into ammonium and then nitrate. Plants are able to absorb nitrate from the soil and break it down into the nitrogen they need, while denitrifying bacteria convert excess nitrate back into inorganic nitrogen which is released back into the atmosphere.

The process can also begin with lightning, the heat from which ruptures the triple bonds of atmospheric nitrogen, freeing its atoms to combine with oxygen and create nitrous oxide gas, which dissolves in rain as nitric acid and is absorbed by the soil.

Excess nitrate or that lost through leaching — in which key nutrients are dissolved due to rain or irrigation — can seep into and pollute groundwater streams.

What about nitrogen fertilizer?

For thousands of years, humans didn’t need to worry about nitrogen, but by the turn of the Twentieth Century it was evident that intensive farming was depleting nitrate in the soil, which raised concerns about the world’s rising population and a possible food crisis.

In 1908, a German chemist named Fritz Haber devised a process for combining atmospheric nitrogen and hydrogen under extreme heat and pressure to create liquid ammonia — a synthetic nitrogen fertilizer. He later worked with chemist and engineer Carl Bosch to industrialize this process and make it commercially available for farmers.

Once production was industrialized, synthetic nitrogen fertilizer — used in combination with new, high-yielding seed varieties — helped drive the Green Revolution and significantly boost global agricultural production from the late 1960s onwards. During this time Mexico became self-sufficient in wheat production, as did India and Pakistan, which were on the brink of famine.

In today’s intensive agricultural systems, synthetic nitrogen fertilizer has become increasingly crucial. Worldwide, companies currently produce over 100 million metric tons of this product every year, and the Food and Agriculture Organization of the United Nations predicts that demand will continue to rise steadily, especially in Africa and South Asia.

As demand continues to rise worldwide, the challenge of nitrogen management is to provide enough to meet global food security needs while minimizing the flow of unused nitrogen — which is 300 times more polluting than carbon dioxide — to the environment.

While many regions remain short of available nitrogen to achieve food and nutrition security, in others nearly half of the fertilizer nitrogen applied in agriculture is leaked into the environment, with negative consequences including increased environmental hazards, irreparable land degradation and the contamination of aquatic resources.

This challenge can be addressed by improving nitrogen use efficiency — a complex calculation which often involves a comparison between crop biomass (primarily economic yield) or nitrogen content/uptake (output) and the nitrogen applied (input) through any manure or synthetic fertilizer.  Improving this ratio not only enhances crop productivity but also minimizes environmental losses through careful agronomic management and helps improve soil quality over time.

Currently, average global nitrogen use efficiency does not exceed 50%, which falls short of the estimated 67% needed to meet global food demand in 2050 while keeping surplus nitrogen within the limits for maintaining acceptable air and water qualities.

Cutting-edge technological options for nitrogen management are on the horizon, though in the short-term nitrogen use efficiency can best be improved at farmer-level, by targeting fertilizer application, use of slow-release nitrogen fertilizers, using precision nitrogen application tools (Green Seeker) or fertigation using micro irrigation.

Much progress has been made in developing technologies for an efficient nitrogen management, which along with good agronomy are proven to enhance crop nitrogen harvest and nitrogen use efficiency with lower surplus nitrogen.

Scientists are investigating the merits of biological nitrification inhibition, a process through which a plant excretes material which influences the nitrogen cycle in the soil. Where this process occurs naturally — in some grasses and wheat wild relatives — it helps to significantly reduce nitrogen emissions.

In 2007, scientists discovered biological nitrification traits in a wheat relative and in 2018 they succeeded in transferring them into a Chinese spring wheat variety. The initial result showed low productivity and remains in the very early stages of development, but researchers are keen to assess whether this process could be applied to commercial wheat varieties in the future. If so, this technology could be a game changer for meeting global nitrogen use efficiency goals. 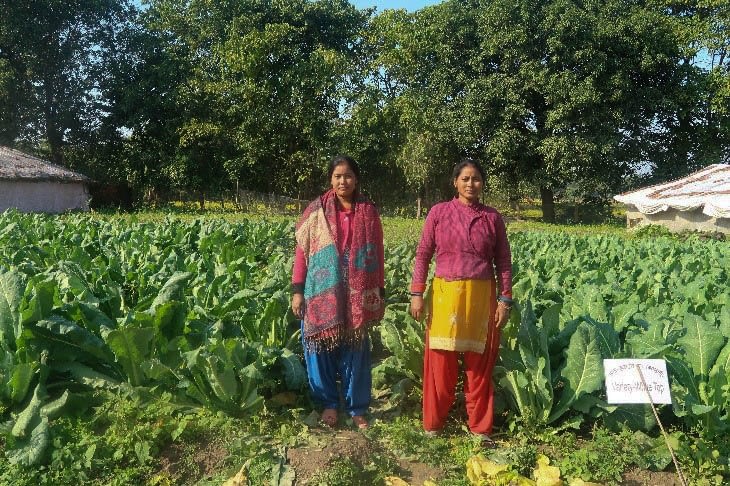 Precision Nutrient Management: The Future of Nitrogen Use Efficiency

This March, the Borlaug Institute of South Asia (BISA) held an international workshop on enhancing Nitrogen use efficiency in wheat using the combined approach of breeding and precision agronomy in Ladhowal, Punjab.