A pledge of $10,000 by international plant breeding company KWS has given a big boost to an online crowdfunding initiative aiming to help maintain the world’s largest maize and wheat germplasm bank. 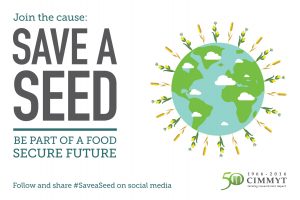 EL BATAN, Mexico (CIMMYT) – A pledge of $10,000 by international plant breeding company KWS has given a big boost to an online crowdfunding initiative aiming to help maintain the world’s largest maize and wheat germplasm bank.

The campaign was launched by the International Maize and Wheat Improvement Center (CIMMYT), which is celebrating its 50th anniversary this week,  to help meet its $2.3 million annual running cost.

The Save a Seed campaign, hosted on a caused-based crowdfunding platform, is attracting new donations to fill a reduction in funds from traditional donors, said Kevin Pixley, director for genetic resources at CIMMYT where the bank is located.

“The germplasm bank is a global public treasure that belongs to all of us; everyone should have the opportunity to help care for it,” he said. “A small donation now makes a big difference to meet today’s and tomorrow’s challenges.”

Germany-based KWS is joining African and Latin American seed producers and members of the general public who have donated to the bank. Contributions keep collections stocked, curated and freely available to researchers who study the genetic diversity to identify traits to improve maize and wheat.

“I hope that many others will follow us to support the CIMMYT Save a Seed crowdfunding initiative generously,” said Léon Broers, executive board member of KWS. “Conserving and extending the world’s most important seed bank for maize and wheat is crucial especially for developing countries in times of accelerating climate change and a growing world population.”

As severe weather and evolving crop diseases threaten our most important staple foods, the bank’s ability to offer scientists novel DNA tools and data management tools to unearth high-value traits from vast maize and wheat seed collections for use in breeding climate-resilient varieties is greater than ever, said Pixley.

CIMMYT’s germplasm is a genetic treasure chest with over 175,000 maize and wheat seed collections, any of which could prove to be the crucial ingredient that breeders need to combat these challenges, he said. In 2015, the bank sent more than 700,000 seed shipments free of charge to researchers in over 80 countries who work to fight disease and improve crops.

As staple foods, maize and wheat provide vital nutrients and health benefits, making up close to one-quarter of the world’s daily energy intake and contributing 27 percent of the total calories in the diets of people living in developing countries, according to FAO. The two crops are essential to agricultural scientists who are looking for ways to increase food production by 70%, the projected need to feed a global population exceeding 9 billion by 2050.

Headquartered in Mexico, International Maize and Wheat Improvement Center (CIMMYT) is the global leader in publicly-funded research for development for wheat and maize and for wheat- and maize-based farming systems. CIMMYT works throughout the developing world with hundreds of partners, belongs to the 15-member CGIAR System, and leads the CGIAR Research Programs on Wheat and Maize. CIMMYT receives support from national governments, foundations, development banks and other public and private agencies.www.cimmyt.org

KWS is one of the world’s leading plant breeding companies. In fiscal 2014/15, 4,700 employees in 70 countries generated net sales of 986 million euros and earnings before interest and taxes (EBIT) of  113 million euros. A company with a tradition of family ownership, KWS has operated independently for some 160 years. It focuses on plant breeding and the production and sale of seed for corn, sugarbeet, cereals, rapeseed and sunflowers. KWS uses leading-edge plant breeding methods to continuously improve yield and resistance to diseases, pests and abiotic stress. To that end, the company invested  174 million euros last fiscal year in research and development, 17.7 percent of its net sales. For more information: www.kws.com. Follow us on Twitter® at https://twitter.com/KWS_Group.

Everything you ever wanted to know about gluten — at CIMMYT

International wheat and gluten experts will gather in Mexico City for the 2018 13th International Gluten Workshop to discuss all aspects of the proteins found in wheat, rye, barley and triticale.