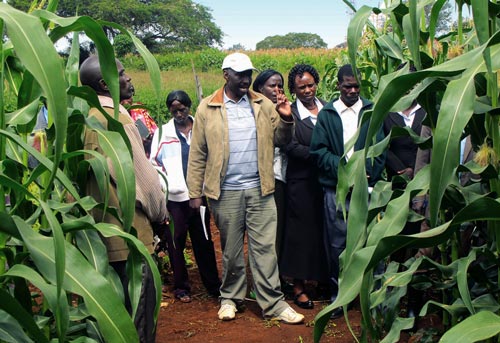 Gender mainstreaming in agricultural development is on the agenda of national governments and the international development community (for more information on CIMMYT and gender mainstreaming see “Integrating gender into WHEAT and MAIZE CRPs: A leap forward”). Building upon the 2012 World Development Report: Gender Equality and Development warning that the failure to recognize the roles, differences, and inequities between men and women could pose a serious threat to the effectiveness of agricultural development strategies, the Australian International Food Security Center (AIFSC) approved the Adoption Pathways project in Eastern and Southern Africa. The project aims to collect gender disaggregated data to achieve better understanding of technology adoption, agricultural productivity, and food security in the regions.

To contribute to the objective, the International Food Policy Research Institute (IFPRI) facilitated a training on gender integration and analytical tools in agricultural research and gender disaggregated survey instruments design. The training took place during 08-12 January 2013 in Addis Ababa, Ethiopia, and was attended by over 20 participants from 5 countries (Ethiopia, Kenya, Malawi, Mozambique, and Tanzania) involved in the Adoption Pathways project and the SIMLESA (Sustainable Intensification of Maize and Legume Cropping Systems in Southern and Eastern Africa) initiative. The training materials were based on case studies from IFPRI projects such as the Gender, Agriculture, and Assets Project (GAAP), and the training itself focused on the concepts of gender; gender in agricultural research; gender livelihood conceptual framework; qualitative methods; the relationship between gender, agriculture, and assets; Women’s Empowerment in Agriculture Index (WEAI); and the need for gender disaggregated surveys. The training also provided concrete advice and feedback on how to analyze gender disaggregated data and covered the needs and opportunities for dissemination and outreach, including ways to share results and plans to synthesize lessons learned. Finally, it enabled participants to identify plans for next steps, including updating and refining the SIMLESA survey instrument with gender component.