EL BATAN, Mexico (CIMMYT) – Scientists are concerned over the proliferation of highly virulent fungal wheat diseases, including two new races of yellow rust – one in Europe and North Africa, the other taking hold in East Africa and Central Asia – and a new race of stem rust emerging in Europe.

The collaborative Global Rust Reference Center (GRRC) hosted by Aarhus University in Denmark and including the International Maize and Wheat Improvement Center (CIMMYT) and the International Center for Agricultural Research in the Dry Areas (ICARDA), was instrumental in identifying the new races of yellow and stem rust.

A strategic tool developed by David Hodson, a senior scientist with CIMMYT plays a key role in monitoring the movement of wheat-rust pathogens, helping farmers combat the disease in time to save crops and prevent food insecurity.

Last year, the Italian island of Sicily was badly hit by a strain of wheat stem rust – an event not seen in Europe since the 1950s, following concerted efforts by wheat breeders to eliminate it.

Stem rust appears as a reddish-brown fungal build-up on wheat stems or leaves, stunting and weakening plants, preventing kernels from forming, leading to shriveled grain and potential crop losses of 50 to 100 percent.

Dispersal modeling, undertaken by the University of Cambridge and the UK Met Office, which forecasts weather and climate change, indicates that spores from the Sicilian outbreak could potentially have spread within the Mediterranean wheat growing region, but scientists are unsure whether they will successfully over-winter, surviving and proliferating, according to a recent story in the journal Nature.

“Several factors may be influencing the changes and rapid spread: increased travel and trade; increasing pathogen populations; more uniform cropping systems and also climate change, but the rapid changes we are observing highlight the need for an enhanced early-warning system,” said Hodson, a member of an international team of scientists collaborating under the Delivering Genetic Gain in Wheat (DGGW) project administered by Cornell University through the Borlaug Global Rust Initiative (BGRI).

Scientists engaged with the major four-year international project – which has a budget of $34.5 million due to grants equalling $24 million from the Bill & Melinda Gates Foundation and a recent $10.5 million grant from UK Aid (Britain’s Department for International Development, or DFID) – use comparative genomics and big data to develop new wheat varieties. The aim is to help governments provide smallholder farmers in the developing world with seeds incorporating resilience to environmental stresses and diseases through local entrepreneurial distributors.

“The sooner farmers are notified of a potential rust outbreak, the better chance they have to save their crops through fungicides or by planting resilient wheat varieties,” Hodson said.

“It’s a constant challenge. We’re always on the lookout for new diseases and variants on old diseases to put the wheels in motion to aid governments who can distribute seeds bred specifically to outsmart rusts.”

However, the long-term sustainability of these vital disease-monitoring systems is uncertain. Despite the significant investments, challenges remain, Hodson said.

“It’s worrying that just as stem rust is re-appearing in Europe we’re at risk of losing the only stem rust pathotyping capacity in Europe at GRRC, due to a funding shortfall. Given the threats and changes we are observing, there really is a critical need for a long-term strategy to address major crop diseases.”

The online Rust Tracker was originally conceived as a tool to battle stem rust, including the lethal Ug99 race, which since its discovery in 1998 has spread from Uganda into the Middle East and is now found in 13 countries. If Ug99 takes hold in a field it can completely wipe out a farmer’s crop. In developing countries, farmers have more difficulty accessing and affording fungicides, which can potentially save a crop.

Under the Durable Rust Resistance in Wheat project, the predecessor to the DGGW project, BGRI-affiliated scientists aimed to prevent the spread of Ug99 into the major global breadbaskets of China and India. So far, they have succeeded in keeping it in check and raising awareness among governments and farmers of its potentially devastating impact.

“Researchers and farmers are connected in the global village,” Hodson said. “Plant pathogens know no borders. We must leave no stone unturned in our efforts to understand the dynamics of wheat rusts, how they’re changing, where they’re spreading and why. If wheat scientists can help prevent a food crisis, we’re doing our job to help maintain political and economic stability in the world.”

Scientist Ravi Singh is named a Fellow of the American Association for the Advancement of Science for distinguished contributions to the field of agricultural research and development. 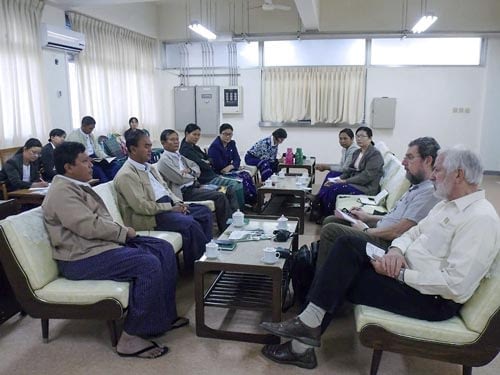