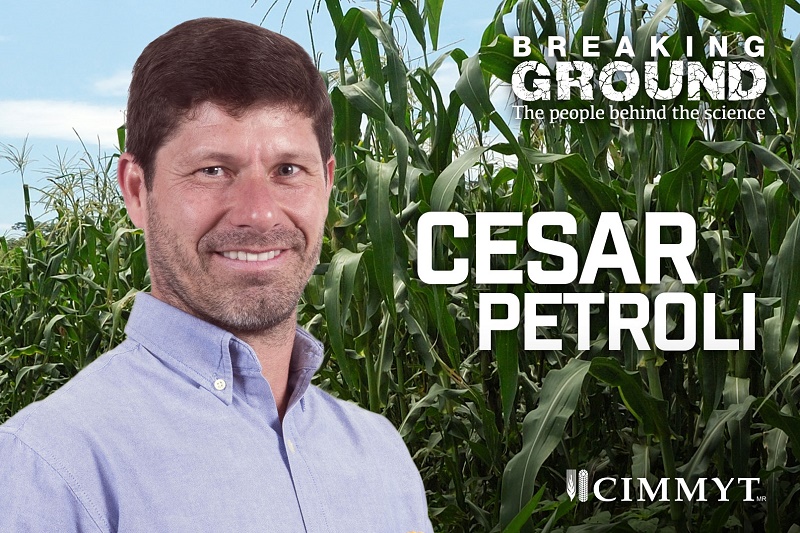 Hailing from Reconquista in Santa Fe Province, Petroli now works for the MasAgro program at the International Maize and Wheat Improvement Center (CIMMYT) and is funded by Mexico’s Ministry of Agriculture (SAGARPA). He first became curious about genetics in the mid-1990s when it was a relatively new field in Argentina and the National University of Misiones offered the only bachelor’s degree in the country. Petroli initially focused on cattle and sheep genetics, which gave him his first introduction to molecular markers, which shed light on characteristics of the organism.

His interest in data and plant genetics took root while he was a student. While completing his doctoral degree at the University of Brasilia in partnership with EMBRAPA, Brazil’s agricultural research body, Petroli began to work on the eucalyptus tree with Diversity Arrays Technology (DArT), an Australian enterprise specializing in developing technologies for whole genome profiling.

At that time, CIMMYT wanted to create what was subsequently to become the Genetic Analysis Service for Agriculture (SAGA) using a platform based on the DArT method. Petroli was the perfect fit. Not only did he bring expertise in sequencing and low-cost DNA fingerprinting, he also brought experience of application of large amounts of data in research; in particular, his experience in eucalyptus.

At the heart of operations at the SAGA laboratory is the Illumina HiSeq 2500 sequencing system, one of only three in Mexico, where CIMMYT is headquartered.  Petroli and his team have the capacity to determine the genetic make-up up to 2,500 maize samples per week for both CIMMYT and its partners, generating vast quantities of data in the process.

“We determine the genetic make-up maize and wheat varieties and collections,” Petroli said. “This can help maize breeders to identify patterns in the DNA which are associated with characteristics such as drought and heat tolerance. These patterns or molecular signposts can then be used to help select the best materials for breeding,” he added, explaining that heat and drought resistant maize and wheat varieties not only help present-day farmers, but could also mitigate potential future risks to global food security from the impacts of climate change.

The data generated when fingerprinting thousands of maize and wheat samples provide opportunities for scientific exploration and synergies; while one team may be exploring heat and drought tolerance, another team can use the same DNA fingerprint data to explore other characteristics such as disease tolerance.

“Sharing data for use by interested breeders broadens collaboration and maximizes benefits to smallholder farmers,” Petroli said, describing his enthusiasm for making data publicly available. “Accessible data increases the impact of our research and allows the global public to benefit from the wealth of knowledge we generate.”

In the first six years of the MasAgro program, more than 2 billion genotypic data have been made available in the Germinate and Dataverse platforms. Petroli’s work forms part of bigger efforts at CIMMYT to study and characterize genetic diversity for use in breeding programs.

Carolina Sansaloni’s passion for genetics began when she was at university in Argentina, an interest that grew as she moved on to receive her master’s and doctoral degrees in molecular biology.