Is gluten the new villain? The New Yorker covers the rising gluten-free trend

“The most obvious question is also the most difficult to answer: How could gluten, present in a staple food that has sustained humanity for thousands of years, have suddenly become so threatening?”

“The most obvious question is also the most difficult to answer: How could gluten, present in a staple food that has sustained humanity for thousands of years, have suddenly become so threatening?” asks an article published in the November 3, issue of The New Yorker. The article, “Against the Grain” by Michael Specter, examines the gluten-free movement and the various theories surrounding the recent rise in “non-celiac gluten sensitivity,” the name given to those who report discomfort after eating gluten yet do not suffer from celiac disease. According to Specter, “there are many theories but no clear, scientifically satisfying answers.” 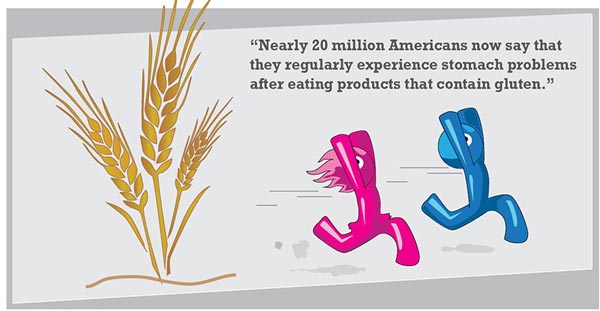 Among the theories is the notion that wheat genes have drastically changed in the past 50 years and the grain can no longer be properly digested by humans, an idea promoted by “Wheat Belly” author William Davis. Little scientific evidence supports this claim however, and the true cause of “non-celiac gluten sensitivity” symptoms remains unknown.

Specter contends that the culprit is more likely to be FODMAPs, a group of carbohydrates present in numerous food items (including wheat) that can cause abdominal pain, bloating and diarrhea; industrial bread additives such as vital wheat gluten; or unhealthy modern dietary patterns. “Although dietary patterns have changed dramatically in the past century, our genes have not,” attests Specter. “The human body has not evolved to consume a modern Western diet, with meals full of sugary substances and refined, high-calorie carbohydrates.”

For those without celiac disease, cutting gluten and wheat products from their diet may not answer the underlying cause of the symptoms, and may do more harm than good. Gluten-free products are often high in sugar and calories to make up for missing ingredients. More investigation and longterm dietary studies are necessary, Specter argues, before blaming wheat or gluten as the culprit of a growing percentage of the nation’s reported dietary sensitivities.

The Borlaug Summit on Wheat for Food Security: speaker spotlight