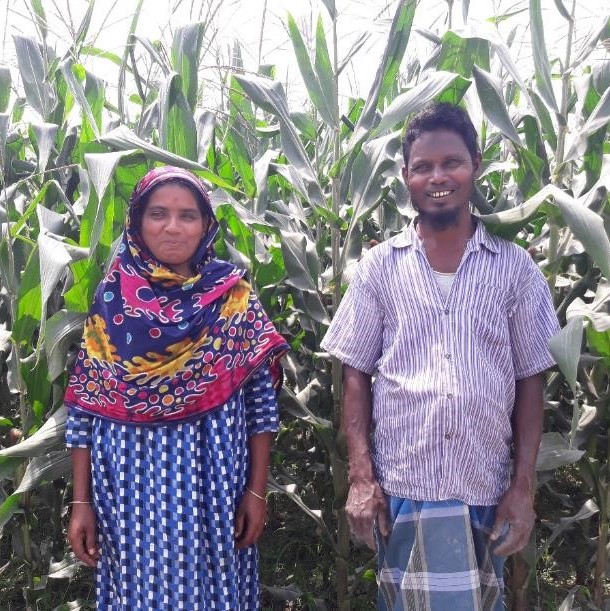 By reducing drudgery, irrigation and costs, conservation agriculture enables the soil of the charlands to produce rice and maize yields consecutively.

The charlands, island-like tracts of land arising from riverbeds as a result of erosion and accretion, are home to millions of Bangladesh’s most vulnerable people. The lives of these people, much like the land itself, are exposed to nature’s forces such as erosion and floods.

In Eachlirchar, an area of charland in Lakkhitari Union, Gangachara, Rangpur district, where the soil struggles to yield even rice, the fate of the marginalized char community is arbitrarily determined by the course of nature. However, mother of three Anzuma Begam is living proof of the resilience and socioeconomic development catalyzed by adopting conservation agriculture-based sustainable intensification technologies.

Promoted by the International Maize and Wheat Improvement Center (CIMMYT) through its Sustainable and Resilient Farming Systems Intensification (SRFSI) project, sustainable intensification technologies have been heralded as a major breakthrough in the fight against charland aridity since 2014. By reducing drudgery, irrigation and costs, conservation agriculture enables the soil of the charlands to produce rice and maize yields consecutively.

Given its eventual success, it is surprising that the first phase of CIMMYT’s work in Eachlirchar did not run according to plan, as the tobacco-producing community did not welcome new technologies. Begam’s husband, Hossain Ali, even rejected her initial proposal to participate in the SRFSI project’s introductory training on zero tillage, weed management and new seeds. However, in spite of her husband’s disapproval and defying patriarchal constraints, Begam stepped forward to accept the new agricultural technology.

After engaging with the project, Begam decided apply conservation agriculture-based sustainable intensification practices on her small plot of land. She began to produce mechanically transplanted rice and strip-till maize. Her first harvest in 2015 deepened her understanding of the benefits of comparatively low utilization of irrigation, pesticides and labor.

Begam has since yielded a bumper maize crop using strip-till technology and her socioeconomic progress is an inspiration to her charland community. Even the floods of June 2017 failed take the smiles off her family’s faces and, in 2018, she and her family moved from a shack into a well-built tin-shaded house.

The profits from Begam’s higher yielding and more reliable maize and rice harvests have ensured access to proper education and food for her children, and her husband now helps cultivate their land using conservation agriculture technologies. “Anzuma did the right thing by not listening to my wrong decision back then in 2014,” he explains. “SRFSI showed her the right way to attain self-reliance through conservation agriculture technologies. I am proud of my wife.”

The Sustainable and Resilient Farming Systems Intensification (SRFSI) project is funded by the Australian Centre for International Agricultural Research (ACIAR).

In South Asia, the population is growing and land area for agricultural expansion is extremely limited. Increasing the productivity of already farmed land is the best way to attain food security.