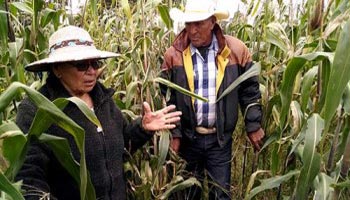 International Women’s Day on March 8, offers an opportunity to recognize the achievements of women worldwide. This year, CIMMYT asked readers to submit stories about women they admire for their selfless dedication to either maize or wheat. In the following story, Julio Cesar Gonzalez Marquez writes about his Super Woman of Maize, Dolores Robles González, a farmer in Mexico.

Nestled in the Morones mountain range, at about 230 kilometers southwest of the city of Zacatecas, within the community known as La Lobera and the municipality called Teul de Gonzalez Ortega, lies the 8-hectare property known as El Ranchito.

El Ranchito is the home of Mrs Dolores Robles Gonzalez, who uses the property to produce native maize in temporal conditions.

Gonzalez, who has spent her entire lifetime farming, and who recently adopted conservation agriculture techniques, said:

“With the implementation of this technology we risk becoming lazier, now that we don’t need to till the soil. Although we start to work later than we would in conventional agriculture, we finish more quickly.

“We’re adopting this conservation tillage technology out of necessity. This change is an example for people who think that if we sow directly, the seed will not germinate. We have already seen that this is not true. Additionally, by implementing these practices we save money because we don’t have to pay to turn the soil. However, assimilation and accommodation are difficult.

“In our case, even watching the practices in the field, we don’t dare to use new technologies as soon as we get them. Generally, these practices require less labor, which translates into more income for us as producers. Thanks to conservation agriculture, we have succeeded in lowering our costs and increasing our production.

“Previously, we had very poor systems with which to work the land, but thanks to the good technical assistance that we have received, we have been able to improve our soil, which is our primary resource.

“The challenge now is to keep increasing our returns at a low cost, and reduce the degradation of our ecosystem as much as possible.”

At first, the men decided to just be spectators, but thanks to her drive to “push more people to benefit,” and thanks to the good results of her plot, there are about thirty farmers from La Lobera and the rest of the Morones mountain range who participate in training courses.

Everyone wants to establish more innovation models, which gives Doña Lola, as she is known in the village, much satisfaction.

“You see, they said that they were not interested, and now they don’t want to leave.”

Any views expressed in this article are those of the author and not of the International Maize and Wheat Improvement Center.