ZINC DEFICIENCY IS ATTRIBUTED TO 800,000 DEATHS EACH YEAR 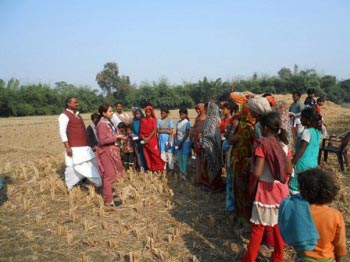 International Women’s Day on March 8, offers an opportunity to recognize the achievements of women worldwide. This year, CIMMYT asked readers to submit stories about women they admire for their selfless dedication to either maize or wheat. In the following story, scientist Velu Govindan writes about his Super Woman of Wheat, Chhavi Tiwari, a senior research associate at Banaras Hindu University.

Zinc deficiency is attributed to 800,000 deaths each year and affects about one-third of the world’s population, according to the World Health Organization (WHO).

Enhancing the micronutrient content in wheat through biofortification is increasingly seen as an important tool to help improve the livelihoods of the most vulnerable, poorest and least educated sectors of society.

That is why Dr. Chhavi Tiwari, senior research associate from Banaras Hindu University in Varanasi, India, is my super woman of wheat.

She has been working with the HarvestPlus program with active collaboration and support from the International Maize and Wheat Improvement Center (CIMMYT) to empower women farmers by making them aware of the value of micronutrient-rich wheat.

Her on-farm training programs increase their understanding of crop and soil management techniques, aiding in the improved production of wheat varieties high in zinc content.

Working closely with women’s self-help groups, she demonstrates the importance of wheat varieties high in zinc content through a participatory variety-selection approach, increasing the potential agronomic and nutritional benefit of these varieties for fast-track adoption.

Through her inclusive approach, a great deal of interest in high zinc wheat varieties has been generated among women farmers. Her efforts have contributed to the adoption of nutritious wheat varieties the eastern part of India’s state of Uttar Pradesh, leading to the potential for technology dissemination in neighboring states.

Engaging with rural women farmers is a core interest of Chhavi’s. She consults women farmers on their views and gives them the opportunity to participate in a decision-making process that increases their investment in agriculture and nutrition.

Her activities play a crucial role in uplifting women by alleviating malnutrition and hunger through nutritious wheat.

Chhavi is the recipient of the 2010 CIMMYT- Cereal System Initiative of South Asia (CSISA) research fellowship and the Jeanie Borlaug Laube Women in Triticum Award from the Borlaug Global Rust Initiative in 2014.

Suchismita Mondal was inspired by the humble flour tortilla to take up a career as an international wheat breeder.