Pakistani researchers and policymakers were instrumental to the work of Borlaug and the Green Revolution in South Asia, said Imtiaz Muhammad, CIMMYT wheat scientist and country representative in Pakistan, speaking at a 22 December unveiling ceremony.

Pakistan breeders have sown and returned data on CIMMYT international maize and wheat trials for more than four decades, and over 150 Pakistani wheat specialists have participated in training courses at CIMMYT.

Held at the National Agricultural Research Center (NARC), Islamabad, the unveiling was organized by CIMMYT, the Pakistan Agriculture Research Council (PARC) and the United States Department of Agriculture (USDA) and drew more than 50 participants, including agricultural scientists, media representatives and staff of Pakistan’s Ministry of National Food Security and Research (MNFSR).

Through a personal message read during the ceremony, Jeanie Borlaug Laube, daughter of Norman Borlaug and BGRI chair, thanked the Pakistan government. “I know my father would be very proud to be on a stamp in Pakistan,” she said.

Lack of good seed of appropriate varieties is holding back harvests of smallholder wheat farmers in rugged, rain-fed areas of Punjab, Pakistan, said a group of farmers to some 50 representatives of seed companies, input dealers, and research, extension and development organizations, at a workshop in Chakwal, Punjab, on 18 September 2014. 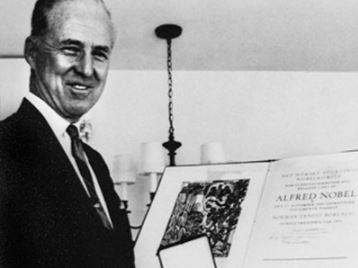 New video honors the 100th birthday of the father of the Green Revolution.