Farmers in India embrace high-zinc wheat for its nutritional benefits

Under-nourishment affects some 795 million people worldwide. According to the U.N. Food and Agriculture Organization (FAO), more than one out of every nine people do not eat enough to lead healthy, active lives. Almost 780 million undernourished people live in developing countries, with about 94% in Asia and Africa, FAO reports.

But these statistics tell only part of the story. Two billion people around the world also suffer from micronutrient deficiency, according to the World Health Organization (WHO). Also known as “hidden hunger,” micronutrient deficiency occurs when the food consumed by people does not provide enough vitamins and minerals. People in South Asia and sub-Saharan Africa are hardest hit by hidden hunger, which is characterized by iron-deficiency anemia, and vitamin A and zinc deficiency.

Zinc is important for cellular growth, cellular differentiation and metabolism. Zinc deficiency, which affects about one-third of the global population, limits childhood growth and decreases resistance to infection. According to WHO, zinc supplements may help to improve linear growth of children under five years of age.

Tackling hidden hunger is the major focus of the HarvestPlus-led wheat biofortification breeding program at CIMMYT and its national program partners in South Asia. The main objective of the program is to develop and disseminate competitive wheat varieties with high grain zinc content and other essential agronomic features.

The biofortification breeding program introduces high zinc levels derived from the best sources (wild species and landraces) into adapted wheat backgrounds. The result is widely adapted, high yielding, high zinc varieties with durable disease resistance. These new varieties are 20-40% superior in grain zinc concentration and are agronomically on a par or superior to other wheat cultivars popular in South Asia. Research is also underway to transfer genomic regions into adapted backgrounds in a more precise and targeted manner, thus accelerating breeding efficiency, as well as to identify biofortified varieties for specific growing conditions in target countries.

Competitive high zinc wheat varieties have already been distributed to national program partners in South Asia to reach resource-poor smallholder farmers. In 2012, HarvestPlus devised a strategy with Banaras Hindu University and CIMMYT to reach thousands of wheat farmers with zinc-biofortified, disease resistant wheat in eastern Uttar Pradesh, India. Wheat productivity in this region is low compared to other parts of the country, which is why it was chosen to serve as a platform for testing and promoting high zinc wheat varieties.

After various demonstrations in 18 villages, many of the farmers became interested in adopting high zinc wheat. In 2013, seed mini-kits were distributed to farmers in the region and by 2014, more than 10,000 farmers had adopted high zinc wheat.

Public-private partnerships are contributing to fast-track commercialization. As a result, more than 50,000 farmers adopted zinc-biofortified wheat varieties during the 2015-2016 crop cycle. Farmers are happy with the “Zinc Shakthi” variety for its good performance, including a yield advantage of about 5-10% under both full and limited irrigation, as well as its grain size, cooking quality, grain color and overall appearance. 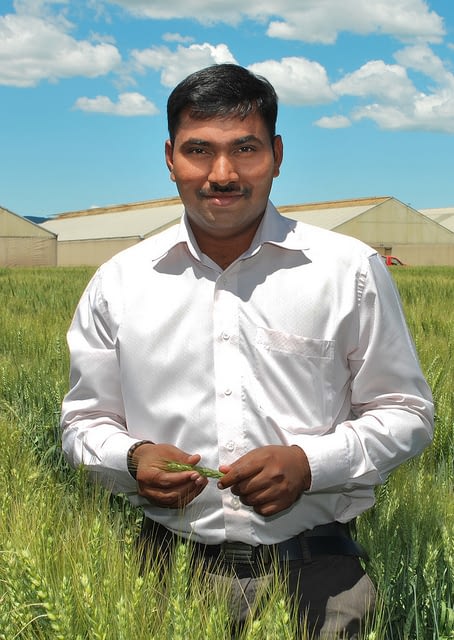