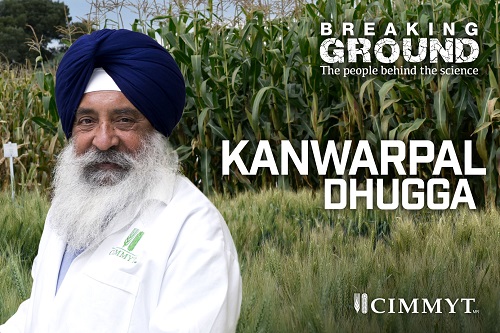 EL BATAN, Mexico (CIMMYT) – Growing up on a small farm in India’s northwest Punjab state, Kanwarpal Dhugga was a young boy when the first Green Revolution wheat varieties arrived in his village. Now stationed in Mexico as Principal Scientist and head of biotechnology for agricultural development at the International Maize and Wheat Improvement Center (CIMMYT), Dhugga has witnessed vast changes in his boyhood community.

“It was tight for families there, living from season to season with no extra money to spend,” Dhugga said, reflecting on the period during the 1960s before new high-yielding, disease resistant wheat varieties began to reshape agricultural potential throughout Asia. “Farmers used to plant a mixture of wheat and chickpeas.  If rains were good, you got good wheat yield; if there was a drought, you got at least chickpeas.”

The use by farmers of the new, high-yielding wheat varieties developed by the late Nobel Peace Prize laureate Norman Borlaug, who was head of the wheat program at CIMMYT headquarters in Mexico, coincided with the introduction of electric power to Dhugga’s area.  Electricity enabled pumping underground water for irrigation, making farming more predictable. Within a couple of years, everyone was growing new, more resilient semi-dwarf wheat varieties and yields had increased substantially.

The community was poor and without many educational resources. Dhugga recalls sitting on the ground at elementary school in India and carrying his books in a satchel along with a burlap gunnysack, which he used as a mat to sit on. Despite challenges, his perseverance and determination eventually took him to Punjab Agricultural University, where he earned a master’s degree in plant breeding, then to the University of California, Riverside for a doctoral degree in botany and plant genetics, and finally for a post-graduate degree at Stanford University, where he worked directly with Peter Ray, renowned biologist and now a Stanford emeritus professor.

“I started in genetics and finished in biochemistry,” Dhugga explained. “Science grew on me and I became so fixated that I couldn’t live without it, and that after I had no clue growing up what I wanted to become in life. The vision extended only as far as the next year.”

From 1996 through 2014, he worked at DuPont-Pioneer, the multinational seed producer, where his work included leading research on expressing high-value industrial polymers in maize grains and soybean seeds, developing in-field screening tools to screen maize hybrids for stalk strength, improving nitrogen use efficiency in maize, and on developing a combined genetic marker x metabolites model for predicting maize grain yield, demonstrating that the combined model was more effective than genetic markers alone.

“I was a developer and supplier of advanced plant genetics for a company that was providing high-quality maize seed to farmers around the world, but I felt like something was missing – a social component,” Dhugga said.

Taking a job at CIMMYT, where the focus is on helping improve food security for poor smallholder farmers in the developing world, satisfied this urge, according to Dhugga. “It felt like completing a circle, given where I came from and the role of CIMMYT in improving farmers’ food security and incomes.”

At CIMMYT, he is leading work to apply a recent technology for what is commonly called “gene editing.” Known as the CRISPR-Cas9 system, it allows researchers to enhance or turn off the expression of “native” genes as well as modify the properties of the translated proteins in crops like maize or wheat more simply and effectively than with other methods, including transgenics.

“To deactivate a gene and thus learn about what it does used to be a major undertaking that took years, and even then you didn’t find some of the things you wanted to,” Dhugga explained. “With the new technology, you can find what you’re looking for in much less time. That’s the main focus of my work right now.”

CIMMYT is collaborating with DuPont-Pioneer to fine map, isolate and validate a major gene in maize for resistance to maize lethal necrosis, which appeared in sub-Saharan Africa in 2011 and has caused major losses to maize crops, decreasing food security and the ability of the smallholder farmers to provide for their families.

“We already know a locus that confers high levels of resistance against the combination of viruses that cause the disease,” he said. “Once we have the specific gene, we can edit it directly in elite maize lines used for hybrid production in Africa, eliminating the need for generations of expensive crosses to get uniform lines with that gene.”

Dhugga greatly respects living systems and, rather than viewing his work as inventing new methods, believes he is drawing out the best potential of nature.

“The biology for these processes is already there in nature; we just need to rediscover and apply it to benefit farmers and ensure food security,” he said.

Mexico and CIMMYT shine for diplomats at El Batán