Xuecai Zhang wants to merge traditional maize breeding methods with new software and other tools to help improve farmers’ yields faster than ever. 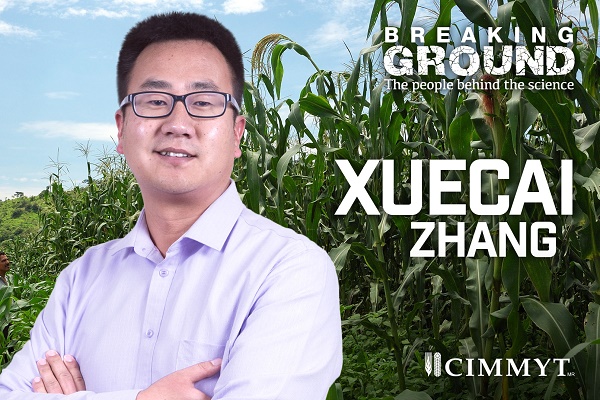 “In the next three decades we need to increase agricultural production by 70 percent to meet projected food demand,” said Zhang, a maize genomic selection breeder at the International Maize and Wheat Improvement Center (CIMMYT). “However, crop yields, while improving, are not increasing quickly enough to meet this challenge. We must explore new methods and technologies that can speed up our crop breeding processes if we hope to feed a world with over 2.3 billion more people by 2050.”

Growing up in Henan province, China, Zhang’s mother was a teacher who instilled a love of science in him from a young age.

“I loved exploring outside and seeing how plants grew — I always wanted to know how they worked,” said Zhang. “Maize was naturally interesting to me because it’s the second most grown crop in Henan, and is becoming a very important crop in China overall.”

Zhang first arrived at CIMMYT in 2009 while completing a doctorate in applied quantitative genetics. He subsequently returned as a postdoctoral fellow in 2011 to undertake molecular breeding and coordinate CIMMYT’s maize genomic selection program.

Since his return, he has focused mainly on helping breeders and statisticians work together to create new tools that can help accelerate the breeding process through genomic selection.

“It’s crucial that as breeders, we’re able to use genomic selection in our work,” Zhang said. “Not only does it speed up the breeding process to deliver better, faster results to farmers in the field, applied well it’s also a more cost-effective option.”

Conventional plant breeding is dependent on a researcher going into the field, observing the characteristics of a plant based on how its genotype interacts with the environment, then painstakingly selecting and combining those materials that show such favorable traits such as high yield or drought resistance.  This process is repeated again and again to develop new varieties.

Genomic selection adds DNA markers to the breeder’s toolkit. After initial field evaluation breeders are able to use DNA markers and advanced computing applications to select the best plants and predict the best combinations of plants without having to wait to evaluate every generation in the field. This speeds up the development of new varieties as more cycles of selection and recombination can be conducted in a year compared with field selection alone.

The cost of hiring a human to go and collect phenotypic data for conventional breeding is increasing, while conversely the costs associated with genomic selection are getting lower as genotyping and computing technology becomes more affordable, according to Zhang.

“Breeders need to think about where the technology is pushing our field,” he said. “They will increasingly have to be versed statisticians and computer scientists to effectively apply genomic selection to their work, and I want to help ensure they have the skills and tools to make the most of the technology.”

Zhang has helped demonstrate to breeders in Latin America, Africa and Asia of the value of genomic selection by showing that the technique can improve the prediction accuracy of successful varieties in comparison to conventional breeding. He also credits joint efforts like the GOBII project, a large-scale public-sector effort supported by the Bill & Melinda Gates Foundation, to apply genomic selection techniques to crop breeding programs across the developing world, as key towards curating the necessary data for genomic breeding programs.

“In the future, I hope to continue to help build better tools for breeders to move towards genomic selection,” Zhang said. “I chose to breed maize because of the potential impact it has to help smallholder farmers globally. Compared with other crops the yield potential of maize is very high, so I want to ensure we are using the best resources available that will help maize reach its full potential.”

Carolina Sansaloni’s passion for genetics began when she was at university in Argentina, an interest that grew as she moved on to receive her master’s and doctoral degrees in molecular biology.