The idea that “Educating women/girls is nothing but a loss,” used to be a common sentiment amongst members of rural Ethiopian communities where the Nutritious Maize for Ethiopia (NuME) project works. Now one is more likely to hear “Women are the foundation for change.”

The International Maize and Wheat Improvement Center (CIMMYT)-led NuME project is reducing food insecurity in Ethiopia by increasing the country’s capacity to feed itself. The project is improving household food and nutritional security, especially for young children and women, through shifting gender norms and the adoption of Quality Protein Maize (QPM).

QPM refers to a type of maize biofortified with two essential amino acids through traditional breeding to improve the inadequacy of protein quality of the conventional maize grown widely by farmers. Consumption of QPM instead of conventional maize leads to increase in the rate of growth in infants and young children with mild to moderate undernutrition from populations in which maize is the major staple food.

According to the World Bank, women contribute 40-60 percent of the labor in agricultural production in Ethiopia and play an important role in income generation, as well as unpaid household tasks. However, many women face severely restricted access to resources and services and lack control over income, greatly hindering their participation in and benefit from new innovations. 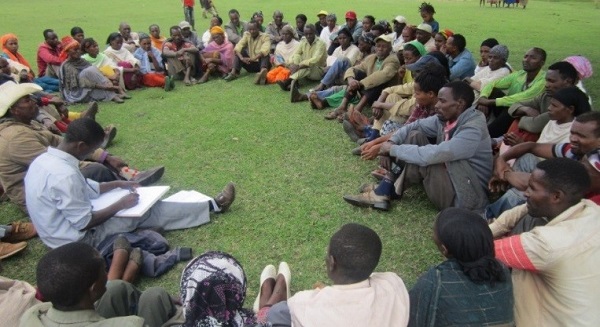 Few programs have specifically considered gender relations when implementing new initiatives in communities, however, when NuME found lower participation of women in the community-based promotion and dissemination of QPM, adapted community conversations were launched in two selected project woredas, or districts – Shebedino and Meskan – for a nine-month pilot in an attempt to raise women’s role in the project.

Community conversation (CC) is a facilitated approach based on the principle that communities have the capacity to identify their societal, economic and political challenges; set priorities; mobilize human, physical and financial resources; plan for action and address their challenges sustainably. It focuses on people’s strengths, resources and how they relate to challenges or problems communities face.

The people benefiting from a CC-driven project set priorities and create a plan of action to mobilize resources to address their challenges sustainably. This helps communities develop a sense of ownership, use local resources and take responsibility to bring about sustainable changes.

Because this approach involves the entire community, it also includes traditionally marginalized groups like women and youth.

When NuME first started community conversations, seating was very rigid due to cultural and religious traditions, but as the sessions continue paving the way for more community awareness on issues around gender norms and stereotypes, the seating has become much more mixed.

A facilitator from Shebedino woreda said, “Participants can’t wait for the bi-monthly conversations and they never want to miss them. These exchanges have helped men and women to get together and discuss their concerns, which was not a common practice before.”

“Women have begun raising their voices during community conversation meetings, while they used to be too shy and afraid to speak and very much reserved about sharing their ideas in public,” a female participant from Meskan woreda reported.

Through debate and the sharing of opinions, and more active participation from women, community conversations have educated participants on gender inequality, its prevalence and harm and have allowed men and women community members to exchange ideas about nutrition more effectively.

The NuME project will continue into 2019. Read more about how CIMMYT is working to equally boost the livelihoods of women, youth and men here.