The Seeds of Discovery (SeeD) project seeks to empower the next generation of Mexican scientists to use maize and wheat biodiversity to effectively meet the needs of Mexican agriculture in the future.

“CIMMYT is famous for helping farmers all over the world, but what fewer people know is that they also help Mexican researchers and students who will become the next generation of researchers through the courses and workshops they offer,” said Alejandro Ledesma, maize researcher at Mexico’s National Forestry, Agricultural and Livestock Research Institute (INIFAP). Above, Ledesma (L), receives certificate from CIMMYT Director General Martin Kropff, Juan Burgueño Ferreira, Head of CIMMYT’s Biometrics and Statistics Unit, and Kevin Pixley, Head of the Genetic Resources Program at a course on statistical analysis of genetic and phenotypic data for breeders held at CIMMYT. Photo: CIMMYT

The Seeds of Discovery (SeeD) project seeks to empower the next generation of Mexican scientists to use maize and wheat biodiversity to effectively meet the needs of Mexican agriculture in the future. By providing professional agricultural research and development opportunities for current and future maize and wheat scientists, SeeD works to ensure that the materials they develop will reach those who need it most. For this reason, SeeD is developing a platform of publicly available data and software tools that enable the efficient use of maize and wheat genetic resources. These genetic resources, or biodiversity, include more than 28,000 maize and 140,000 wheat samples, known as accessions, that are conserved in CIMMYT’s seed bank and available to researchers worldwide.

Genetic resources are the raw materials or building blocks used to develop new maize and wheat varieties needed to meet the demands of a growing population in a changing climate. Many of these maize and wheat accessions contain positive traits such as drought tolerance or disease resistance, which if bred into new varieties  have the potential to improve food security and livelihoods in countries such as Mexico in the global south.

However, the specific potential impact of SeeD on Mexican agriculture and society will only be realized if breeders and scientists effectively use the products resulting from the project. By inviting researchers, professors and students to participate in workshops, training courses and diverse research projects, a growing cadre of scientists is learning how to use the databases and software tools developed by SeeD and validating their utility.

“Sharing the knowledge generated by SeeD and making it available to the scientific community will help accelerate the development of new varieties that will benefit long-term food security in Mexico and the world,” said Cynthia Ortiz, a graduate student in biotechnology at the Center for Research and Advanced Studies of the National Polytechnic Institute (CINVESTAV) in Mexico City.

Ortiz is conducting research for her Master of Science thesis mentored by SeeD scientist Sukhwinder Singh, who is helping her map the quantitative trait loci (QTL) for phenological and grain yield-related traits in wheat varieties created by crossing synthetic wheat varieties with elite lines. She has participated in two SeeD workshops focusing on wheat phenotyping for heat, drought and yield as well as on the use of the maize and wheat molecular atlas, where she learned to use SeeD software such as Flapjack and CurlyWhirly to visualize the results of genetic diversity analyses.

“The materials SeeD has developed have opened the door for identifying genetic resources with positive traits such as heat and drought tolerance, or resistance to pests and diseases that affect crops all over the world,” Ortiz said. “And the best part is that at the same time, they have sought to protect the genetic diversity of these crops, using the native biodiversity we have in Mexico and the world to confront the challenge of ensuring food security.”

David Gonzalez, a recent graduate of the Chapingo Autonomous University in Texcoco, a city about 30 km (20 miles) from Mexico City, agrees. He worked with SeeD scientists Sarah Hearne and Terence Molnar on his Master of Science thesis, identifying genetic resources with resistance to the maize leaf disease “tar spot complex” (TSC) by using genome-wide association study (GWAS) and genomic selection.

“The software and databases SeeD develops for analyzing genotypic and phenotypic data are novel tools that can be used for research as well as academic purposes,” Gonzalez said. “They are a valuable resource that can be utilized by academic institutions to train students in genetic analysis.”

“This training, as well as the valuable help and support from CIMMYT scientists, really helped me develop myself professionally,” he said. “It was exciting to work with such an ambitious project, doing things that have never been done before to discover and utilize maize and wheat genetic diversity for the benefit of farmers. I look forward to using what I’ve learned in my future career to develop varieties that meet the needs of farmers in Latin America.”

SeeD is a joint initiative of CIMMYT and the Mexican Ministry of Agriculture (SAGARPA) through the MasAgro project. SeeD receives additional funding from the CGIAR Research Programs on Maize (MAIZE CRP) and Wheat (WHEAT CRP), and from the UK’s Biotechnology and Biological Sciences Research Council (BBSRC).

The Seeds of Discovery (SeeD) project seeks to empower the next generation of Mexican scientists to use maize and wheat biodiversity to effectively meet the needs of Mexican agriculture in the future. 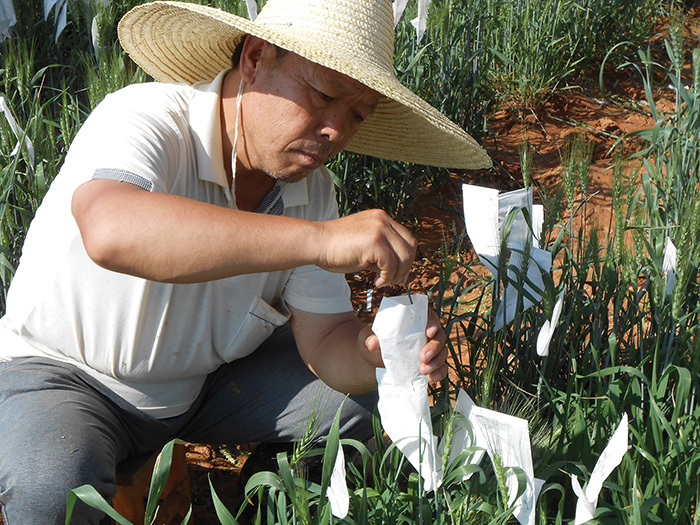 New paths ahead for agricultural research

It is clear that wherever CIMMYT is involved, we have a valuable and unique contribution to make.

Jiafa Chen has helped identify new genetic resources that have been used in breeding new maize varieties that withstand environmental and biological stresses.