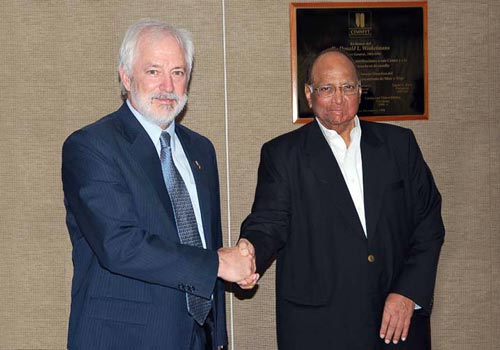 EL BATAN, 06 September 2010—On a historic day for CIMMYT, Director General Thomas A. Lumpkin and Dr. S Ayyappan, Director General of  the Indian Council of Agricultural Research (ICAR),  signed a joint declaration of intent in the presence of H.E. Mr. Sharad Pawar, Honorable Minister of Agriculture of India, to establish the Borlaug Institute for South Asia (BISA). Located in India but serving the entire region, BISA will constitute a state-of-the-art, international agricultural research and development organization that applies cutting-edge technologies to improve cropping systems and help farmers address current and emerging challenges to food security such as climate change, natural resource scarcities, and rising market demand. According to the declaration, the new institute commemorates the “…fond and respectful memory of the late Dr. Norman Borlaug, and his contribution to the Green Revolution of India and of South Asia.”

“BISA will support and pursue advanced research, but our desire is ultimately that the research reach farmers’ fields,” said Minister Pawar. “It has to…if it is going to be in the name of Dr. Borlaug.”

In the El Batán reception lobby, the visitors viewed a recently-built display for prominent awards, including the Nobel Peace Prize given to Dr. Borlaug in 1970 and the 2000 World Food Prize shared by retired CIMMYT Distinguished Scientist Surinder K. Vasal and former CIMMYT Biochemist Evangelina Villegas.

One of the day’s highlights was the planting of an India-CIMMYT friendship tree in the pine grove near the memorial tree of Dr. Borlaug. The day closed with a gala dinner and ceremony at a leading Indian restaurant in Mexico City. Dr. Manmohan Singh, the Prime Minister of India, made the first public announcement of BISA in his Independence Day address on 15 August 2010.

“This is a major juncture for CIMMYT, and we are extremely grateful for the interest and support of the Indian government in this new endeavor,” said Lumpkin.

A media release and other materials describing BISA, including a link to the complete text of Dr. Singh’s address, are available at www.cimmyt.org.