No need to dig for ancient seeds to discover how and when maize moved from its ancestral home in Mesoamerica to become one of the world’s most widely-sown and popular food crops. New work by gene sleuths from CIMMYT and numerous maize growing countries solves the puzzle using DNA of present-day maize.

How did a crop domesticated some 7,000 years ago from a humble Mexican grass called teosinte become the number-one food crop in Africa and Latin America, and a major food, feed, and industrial crop just about everywhere else?

The incredible story of maize has been told in books, but there have always been lingering doubts, unanswered questions. If, for example, as records show, in 1493 Columbus brought maize to Spain from his visit to the warm climes and long days of the Caribbean, how is it that reliable accounts have the crop being grown in 1539 in the cold, short daylengths of Germany? That’s only 46 years later, and far too soon for such a radical adaptation in tropical maize. In another case, maize was supposedly brought to African countries like Nigeria by Portuguese colonists, but the local names for maize in that country are of Arabic derivation, suggesting that the crop likely arrived via Arabic-speaking traders. 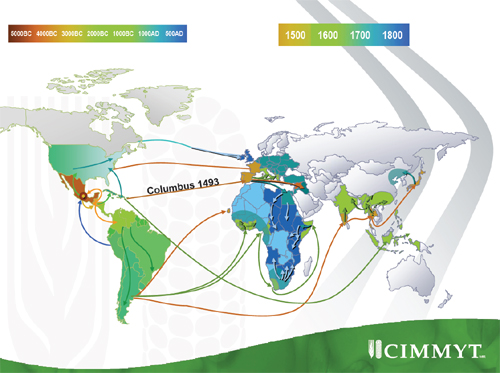 Deciphering the history in genes

Recent work by CIMMYT and partners sheds new light on maize’s global migration. With support from Generation, a Challenge Program of the Consultative Group on International Agricultural Research, and in collaboration with nine research institutes on four continents, scientists have used DNA markers—molecular signposts for genes of interest—and new approaches to analyze nearly 900 populations of maize and teosinte from around the world. “What is emerging is a far clearer picture of the crop’s global diversity and the pathways that led to it,” says CIMMYT molecular geneticist and leader of the effort, Marilyn Warburton.

Phase I of the work was funded by PROMAIS, a European maize consortium, and focused on North America and Europe. The Generation Challenge Program commissioned Phase II, which featured global coverage and brought the number of maize populations studied to 580. In Phase III, partners are adding another 300 populations of maize and teosinte, to fill any geographical gaps. A primary objective is to gather samples of landraces—local varieties developed through centuries of farmer selection—and ensure their conservation in germplasm banks. The diversity studies apply a method developed by Warburton for using DNA markers on bulk samples of individuals from large, heterogeneous populations like those typical for maize.

Among other things, the studies corroborate the notion that northern European maize originates from North American varieties brought to the continent several decades after Columbus’ returned, and definitely not from tropical genotypes. “The two main modern divisions of maize arose about 3,000 years ago,” says Warburton, “as maize arrived in what is now the southwestern US and, at about the same time, on the islands of the Caribbean. Temperate maize spread further north and east across North America, while tropical maize spread south. The temperate-tropical division remains today. What maintains it are differences in disease susceptibility and photosensitivity—essentially, how daylength affects flowering time. The two maize types are now so different from each other that they do not cross well, and their hybrids are not well adapted anywhere.”

The work continues and, in addition to elucidating the epic journey of maize, will help breeders to home in on and more effectively use traits like drought tolerance from the vast gene pool of maize.

The above report is largely based on a longer description of this work, “Tracing history’s maize,” that appears in Generation’s “Partner and Product Highlights 2006.”