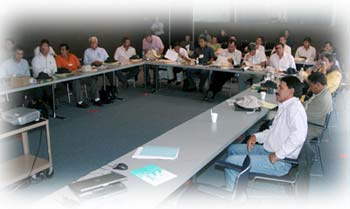 CIMMYT maize breeders Dave Beck and Hugo Cordova organized and led a seed production course on 6-14 September at CIMMYT headquarters in El Batan, Mexico. The course, entitled “Production of High Quality Seed with an Emphasis on Quality Protein Maize,” was funded in part by the Mexican national organization SAGARPA.

This was the first seed course in which Beck and Cordova targeted mainly small seed companies from Mexico. They hosted 38 participants from universities, the public research sector, private companies, farmer associations, and other institutes involved in maize seed production. Seed courses of this type are offered about once a year at CIMMYT headquarters and several times a year at outreach offices, particularly in Africa.

Beck says he hopes to have an impact on small-scale farmers. “We’re trying to balance our training course between the formal and informal seed sectors with the principal goal of getting more improved seed into the hands of small-scale farmers,” he says. “I hope that participants gain a better understanding of the key aspects involved in quality seed production and that they can walk away with new, practical ideas on how they can technically improve the quality of the seed they’re producing.”

The course focused on quality protein maize (QPM), which some participants were learning about for the first time. Beck wants participants to see that QPM products developed by CIMMYT and partners are competitive with commonly used varieties. “This is an important step in the chain of getting materials to farmers,” says Beck. “We can develop excellent varieties, but if they’re not quality produced in sufficient quantities, our breeding research work is going to have minimal impact.”

“The participants were really impressed with what they saw at the field level,” says Cordova. “We know that QPM can alleviate hunger and malnutrition in the coming years, so we are promoting the use of this germplasm.”