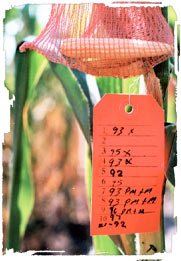 Throughout the developing world, drought is second only to soil infertility as a constraint to maize production, and probably reduces yields worldwide by more than 15 percent (more than 20 million tons) annually. Lines have now been drawn on a new battleground: a map of the chromosomes that shows important areas that help maize resist drought.

Of the world’s three most important cereal crops (rice, wheat, and maize), maize has the most complex genetic structure. As maize has been bred and adapted to many different growing environments, selection has produced a crop that contains significant differences in levels of genetic diversity. But many genes and genetic sequences should be the same or similar. Scientists are hopeful that genetic traits for drought tolerance can be found in such shared genomic sections, across a wide range of tropical maize types. A new consensus map of genes across maize populations may be the key to identifying universal genetic “hot spots,” those genomic regions that confer drought tolerance in diverse settings to varying degrees. 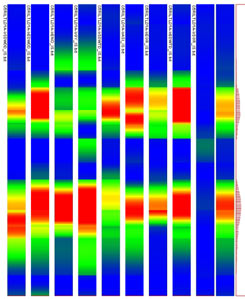 “Are there any regions in the maize genome that come out as ‘hot spots’?” Jean-Marcel Ribaut and his team have asked. Known to scientists as quantitative trait loci (QTL), these regions tell scientists approximately where the genes determining a particular plant trait are located. The QTL is not a gene itself but a genomic region in which genes of interest are probably located. Prior genomic maps of QTLs for drought tolerance in tropical maize applied only to specific maize lines or populations. The CIMMYT team and partners have developed a single map that combines available drought QTL data from many trials of different tropical maize types in diverse environments. “Having all the QTL information integrated into a single map should allow us to identify the outstanding genomic regions involved in drought tolerance,” Ribaut says.

Scientists have measured drought related traits such as ear number, chlorophyll, and carbohydrate content of maize plants in the field, and have extracted and analyzed DNA from the same plants in order to plot the traits on the genomic maps. Ribaut, now Director of the Generation Challenge Programme, and CIMMYT molecular geneticist Mark Sawkins hope to link the traits they measured in the field with regions in the maize DNA.

“The idea is ambitious,” says Ribaut, “for it should allow maize breeders to select the right parents for drought tolerant maize by ensuring they have these important regions on their genome.”

With funding from the Rockefeller Foundation, members of the project team will give courses on this approach in to NARS scientists in Kenya and China over the coming months.

The maize with the beans inside: QPM gathers a following in Kenya