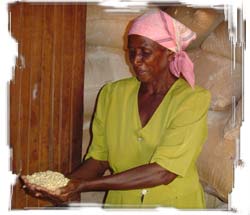 In the war against drought each victory is very hard-fought. Stress tolerant maize will make a difference.

For years CIMMYT has been developing maize that is better suited to the harsher, drier weather conditions many Africans face today. Ever more drought-tolerant maize developed by CIMMYT and its partners is a major scientific success. The recent drought that affected Kenya and neighboring countries would seem to be the perfect crucible in which to test the capacity of this maize to make a difference in people’s lives.

That’s what the people of the Wikwatyo Self Help Group, a small farmer’s group in the village of Kaasuvi in Makueni, south-eastern Kenya, thought as well. The region has perennial food shortages which increasing drought has been making worse. The African Medical and Research Foundation (AMREF), an international NGO, provides emergency food relief on a regular basis in the region.

“They always give you less than you need so people still have to go out and work,” says Mrs. Musiawa Kiluva, the chairperson of the 14-member self help group referring to the fact that farmers still try to grow maize in the hostile land. “Furthermore people have wised up. Even if you receive relief food you can sell the maize you harvest and make some money.”

Working with researchers from CIMMYT and the Kenya Agricultural Research Institute (KARI) the group learned community-based seed production, specializing in newly-released, open-pollinated varieties (varieties that let farmers save seed from one season to the next without paying a penalty in yield). Mrs. Kiluva says the group decided to try seed production when the rains failed between 2003 and 2004, resulting in an acute seed shortage throughout the region. This was because farm families had to eat the seed they normally would have saved.

“You can’t save seed when you are hungry,” Wilson Muasya, a KARI maize breeder working with the CIMMYT Africa Maize Stress (AMS) project, points out.

The Wikwatyo group had been exposed to drought-tolerant maize varieties through CIMMYT-coordinated trials and demonstration plots, and the farmers had already decided they wanted to grow them. Muasya was eager to see these new varieties multiplied and in farmers’ fields.

“This shows the natural progression that improved varieties take,” says CIMMYT maize breeder Stephen Mugo, who coordinated the Rockefeller Foundation-funded seed component of the project. “Breeding, participatory evaluation, acceptance by farmers, and then seed production when the demand has been created is what we hope to see.”

Using their training, within four months of planting the Wikwatyo group had harvested, dried, shelled, treated, and bagged 4.2 tons of certified, quality seed of an extra-early, low-nitrogen-tolerant variety. They expected to sell the seed, emulating the success of a similar group in Uganda.

The Bakusekamajja Women’s Group in Uganda, trained by the seed project since 2001 is a great success. Now with a membership of 400 women and 53 men, from 16 members just 10 years ago, Bakusekamajja currently sells 430 tons of certified maize seed each year to a commercial seed company. In 2002 the group registered itself as a fully fledged agricultural NGO. “Our members’ incomes have increased; the women are financially independent,” says the group’s chairperson Grace Bakaira.

Unfortunately, the drought in Makueni region continued into 2006 leaving farmers with few resources at all. They were afraid to spend what little they had on the one technology that might make a huge difference next season. While demeaning, food aid was safer. The Wikwatyo group is going to have to wait a bit, but they know they have a winning technology. It is just a matter of time.

“If we could continue to produce this new seed, the farmers in Makueni would start harvesting maize within 3 months, and very soon people would no longer have to depend on relief food,” says Mrs. Kiluva. “Progressive farmers could lead by example.”

The Africa Maize Stress project is currently supported by the German Ministry for Economic Cooperation and Development (BMZ), the Rockefeller Foundation and the International Fund for Agricultural Development (IFAD)