The CIMMYT Board of Trustees Meeting commenced on 02 October 2011 at the IARC in Delhi, India. Comprised of 15 members from 11 different countries, representing private seed companies, agricultural policy organizations, farmer associations, and agricultural research institutes, the Board of Trustees meets every six months to support and advise CIMMYT’s senior management in operational strategies and direction. Newly-elected Board Chair Sara Boettiger convened the meeting and commended the organization on its recent achievements and growth, stating that “there are amazing things going on at CIMMYT.”

Opening the meetings, both Boettiger and CIMMYT Director General Thomas Lumpkin highlighted recent food security issues: the droughts in the horn of Africa and southern USA, flooding in Pakistan, and the volatility of food prices. As the meetings progressed, the main topics discussed included the recent approval of the Borlaug Institute for South Asia (BISA), fundraising developments, staff safety, and the upcoming construction plans to improve the infrastructure of CIMMYT headquarters. 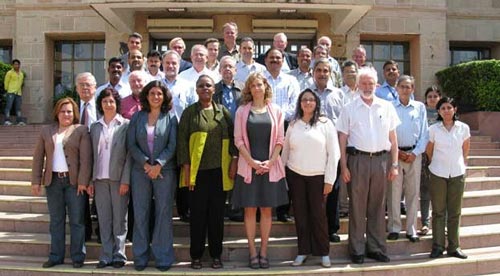 Presentations also emphasized improvements in the past six months regarding staff, infrastructure, and growth. In particular, the success of the MasAgro initiative and the recent approval of BISA, which Lumpkin attributed to the professionalism and dedication of the national staff at the Delhi office, particularly Raj Gupta and Ajai Kumar.

Marianne Bänziger, Director General of Research and Partnerships, highlighted the need to manage the current levels of growth at CIMMYT, and the important role played by national staff in all CIMMYT offices. In terms of growth, Banziger noted that Asia is the region which has undergone the greatest expansion; while in Africa, Kenya was highlighted as the country undergoing the most growth in terms of CIMMYT international staff.

Also in attendance were new staff members Bruno Gerard (Head of the Conservation Agriculture Program), Tom Short (Head of Financial Services), and returning CIMMYT staff member Kevin Pixley (Head of Genetic Resources). The meeting provided an opportunity for introductions, and for these members to familiarize themselves with current information regarding CIMMYT’s structure, growth, and upcoming challenges.

During the meetings, Boettiger stated that “CIMMYT must remember who we are and who our real stakeholders are – the world’s poor struggling to feed their families.” She also reminded staff that whilst management and organizational responsibilities are vital for delivering impact, CIMMYT senior staff must also strive to remain focused on the purpose and the mission of CIMMYT – to feed people.