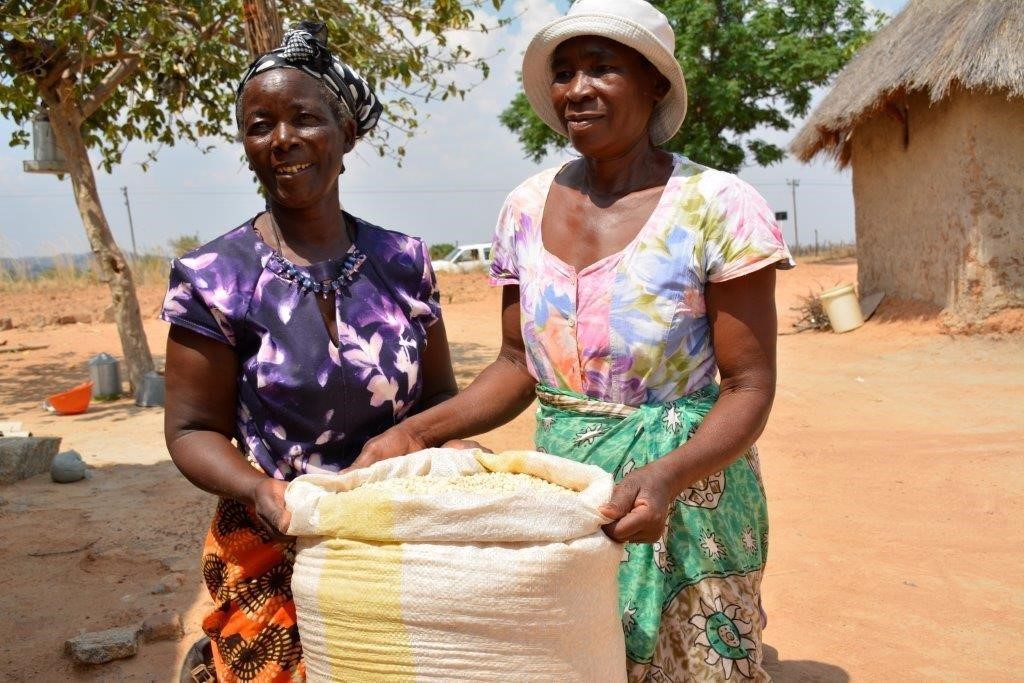 CIMMYT's drought-tolerant varieties have been delivered to three million farmers across Africa.

HARARE (CIMMYT) — “We are no longer sure when to prepare the land for planting or when to start planting. It’s pretty much gambling with nature,” complains 62-year old Appollonia Marutsvaka of Zaka district, Masvingo province, Zimbabwe. “Most of the time the rains are not enough for crop production. If the situation persists, then most of us who have small farms will sink deeper into poverty, because we depend on agriculture for our livelihoods.”

Most farmers in Zaka argue that they only get one good harvest every five to six years. Changes in weather patterns have turned agriculture into a gamble with nature for smallholder farmers.

It is estimated that maize yields in Zimbabwe and South Africa’s Limpopo Province will decrease by approximately 20-50 percent between now and 2045. This predicted decline will pose a major problem, as maize is the region’s main staple food. Low yields in this region are largely associated with drought stress, low soil fertility, weeds, pests, diseases, low input availability, low input use, and inappropriate seeds.

After years of work on maize improvements projects, the United States Agency for International Development (USAID), through the International Maize and Wheat Improvement Center (CIMMYT), made a bigger commitment to researching, supporting and getting drought-tolerant maize into the hands of smallholder farmers. To date, with substantial support from the Bill & Melinda Gates Foundation, drought-tolerant varieties have been delivered to three million farmers across Africa.

“Given the accumulating evidence of climate change in sub-Saharan Africa, there is an urgent need to develop more climate resilient maize systems. Adaptation strategies to climate change in maize systems in sub-Saharan Africa are likely to include improved seeds with tolerance to drought and heat stress and improved management practices,” says Jill Cairns, CIMMYT senior maize physiologist.

CIMMYT, together with partners under the CGIAR Research Program on Maize (MAIZE), developed drought- and heat-tolerant maize varieties through its breeding program in sub-Saharan Africa.

Heat tolerance was not previously a trait in African breeding programs. CGIAR Climate Change, Agriculture and Food Security (CCAFS)’s work highlighted the importance of heat tolerance in future climates, and in 2011 CIMMYT started breeding for this trait. During the past year, the El Niño induced drought has demonstrated the need for maize which is also heat-tolerant. If CIMMYT had not started working on these varieties in 2011, it would have taken until 2021 to have a drought and heat tolerant maize variety.

A recent media tour of Zaka and Chiredzi districts in Zimbabwe, where CIMMYT conducted regional on-farm variety trials for the new climate-proof seed varieties, revealed that the new drought- and heat-tolerant maize is an important way of combating climate-change induced food shortages. Research carried out by CIMMYT revealed that under experimental conditions, the new varieties doubled maize yields when compared to the yields of commercial varieties.

Smallholder farmer Marutsvaka, who participated in the on-farm variety trials, says: “In the past, I harvested nothing as my crops were literally burnt by the scorching heat. During the 2015-2016 growing season, I realized almost 200 kilograms of white grain.” One of the challenges of these new maize varieties is the time taken between testing and seed availability on the market. For example, some of these new maize varieties would only be on the market during the 2018-2019 agricultural season.

The 2014 African Agriculture Status Report states that the vital food producers face a risk of being overwhelmed by the pace and severity of climate change. The authors called for the adoption of climate-smart agriculture that will help make crops more resilient to future extreme weather events.

“For our farmers to be productive and ensure food security, we need to build resilience to help them mitigate the onset of climate change,” observed Cosmos Magorokosho, CIMMYT senior maize breeder. “We are talking about a situation when the rain does not come at the right time or the length of the [growing] season is shortened as a result of drought and other stresses, such as heat.”

He added that helping small-scale farmers adopt climate-smart farming techniques would “prepare them for even more serious challenges in the future… this means we need both to adapt agriculture to climate change and to mitigate climate change itself.’’

However, getting a new strain of maize out of the research station is not the same as getting it to the fields. Creating a distribution chain in Africa has been a bigger challenge than inventing the product itself.

Gabriel Chiduku, a sales and marketing representative for Klein Karoo, a private seed company which introduced the CIMMYT developed seed of drought-tolerant varieties to Zaka farmers, told the farmers that the seed is readily available.

With the drought- and heat-tolerant maize varieties, Zaka farmers are producing three tons per hectare of maize, up from less than a ton.