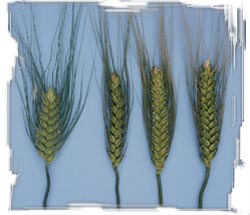 New study shows genetic diversity in CIMMYT wheat now as high as it was before the Green Revolution.

A study just published in the journal Euphytica, and based on work funded largely by the Eiselen Foundation, shows that modern breeding techniques have restored genetic diversity in CIMMYT’s improved wheat germplasm and brought wheat’s wild relatives back into the family.

The adoption of “Green Revolution” wheats starting in the 1960s had spectacular results, bringing self-sufficiency in wheat to India, Pakistan and other countries. The new, semi-dwarf varieties had higher yields and were resistant to production-limiting diseases. Farmers selected and grew the best-performing varieties and breeding efforts at CIMMYT and other centers continued to build on the strength of those varieties and the valuable traits they exhibited. In fact today varieties based on CIMMYT-derived materials dominate the wheat fields of the developing world and much of the developed world as well.

One result of this selection process by both farmers and breeders has been a narrowing of the genetic base of varieties in farmers’ fields, a decline in the inherent diversity of wheat being grown. If CIMMYT wheats are genetically uniform, the vulnerability of global wheat production to a devastating new disease or insect pest outbreak is high. Increased genetic diversity provides a buffer against such risks and reduces vulnerabilities.

CIMMYT recognized this risk and designed novel breeding strategies to put diversity back into the wheat germplasm it provided. One technique is to use one of wheat’s wild relatives as a parent in the breeding cycle. Wild relatives should bring to the wheat family traits that might have been lost over thousands of years of farmer selection and the last century of more intense breeding. CIMMYT began incorporating materials from the ‘wide crossing’ technique into its wheat breeding fifteen years ago. The first wheat varieties from this technique are now reaching farmers fields but until now CIMMYT could not say for certain whether or not there had been an impact on genetic diversity.

That is what CIMMYT molecular geneticist, Marilyn Warburton and her co-authors set out to measure. By examining the DNA of the landraces of wheat grown by farmers before modern breeding and comparing it with DNA from the most popular modern varieties and the newest materials from CIMMYT, the team was able to confirm the decline in diversity in popular current wheats while at the same time demonstrating that new wheats from CIMMYT had genetic diversity similar to that in the pre-green revolution landraces.

“The study confirms what we had hoped would happen,” says Warburton. “It means that in the future, wheat will carry its historic heritage back into farmers’ fields.”

“The successful incorporation and re-mixing of genetic diversity from wheat’s wild relatives has created wheats containing more variation than has ever been available to farmers and breeders, possibly since hexaploid (the complex genetic structure of wheat that arose from the accidental crossing of wild relatives and grasses in the distant past) wheat first appeared 8,000 years ago,” the paper concludes.