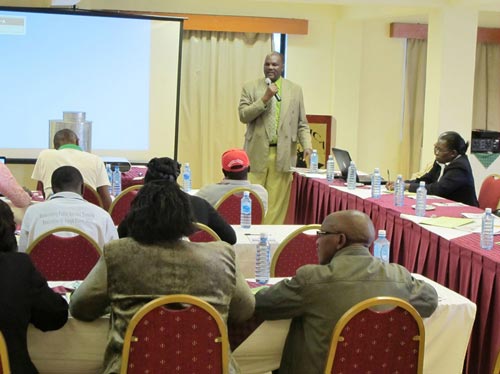 Kenya has experienced tremendous improvements in maize productivity, rising from 1,530,000 metric tons in 2002 to 3,420,000 in 2011. However, postharvest losses of up to 40% of the harvested grain pose great challenges to attaining food security, as about 80% of Kenyans live in rural areas and derive their livelihoods mostly from agricultural activities. With maize being the main staple crop and agriculture the cornerstone of Kenya’s economy accounting for 27% of GDP and producing over 75% of industrial raw materials, postharvest losses also pose a challenge to the economic development of the country. To address these issues, CIMMYT and the Kenya Agricultural Research Institute (KARI) organized the Improved Postharvest Management Training Course for Extension & Media Personnel in Nakuru, Kenya, during 26-27 June 2013.

“It is pointless to heavily invest in good agricultural practices, attain high yields, and lose 40% of it. Feeding the nation does not only require increased production but also a safeguard of all that is produced,” stated Leonard Ochieng’, Nakuru County director of agriculture, Ministry of Agriculture, presiding over the official opening of the course. The training aimed to build technical capacity in hermetic grain storage technologies, such as metal silos and hermetic bags, among Kenyan extension and media staff.

According to Tadele Tefera, CIMMYT entomologist and coordinator of the Effective Grain Storage for Sustainable Livelihoods of African Farmers Project, the course also intended to create awareness on the importance of grain postharvest management, help extension and media staff gain insights into different factors affecting postharvest management, and explain traditional and improved postharvest technologies and their use in grain loss reduction. According to Nakuru County Crops Protection Officer Hannah Oduor, there is always a surplus of maize in Trans Nzoia, Uasin Gishu, and Nakuru (the Rift Valley counties referred to as the granaries of Kenya), but the country is forced to import more nonetheless. “We cannot afford to continue importing maize, for this is a very expensive and unsustainable affair. Money for development is used to import food that we could have easily safeguarded with appropriate technologies like metal silos,” stated Ochieng’. The problem lies in high incidence of maize weevils and the larger grain borer combined with lack of effective storage technologies. “We need technologies like the metal silos for effective storage of this surplus to cater for periods of scarcity and for redistribution to other parts of the country where production is below consumption,” said Oduor.
Grace Kirui, the Nakuru deputy county director of agriculture in charge of extension and training, lauded CIMMYT and KARI for organizing the course. “It was in line with the Ministry of Agriculture’s renewed efforts in intensifying training and dissemination of appropriate pre- and post- harvest technologies to reduce both quantitative and qualitative losses,” she noted and then called on the trainees to use their newly-acquired knowledge to educate and create awareness among the wider public. “The technologies that reduce postharvest losses, to which you have been exposed during the training, will go a long way in improving food security, creating employment, increasing farm incomes, saving on foreign exchange, and alleviating poverty,” said Kirui. “I call upon you, agricultural extension officers, to work hand in hand with artisans to promote the technology during your normal extension activities, field days, exhibitions, and shows.”

The Borlaug Summit on Wheat for Food Security: 26 March