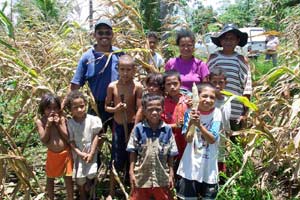 After almost 450 years of foreign occupation, East Timor became the world’s newest country when it declared independence in May 2002. Facing a host of hurdles as it rebuilds destroyed towns and damaged infrastructure, one thing the country lacks is productive and well-adapted germplasm for major crops.

In response to this need, a project called Seeds of Life has been introducing, testing, and distributing improved germplasm to farmers on the island. The project, in which CIMMYT participates, aims to improve food security and build the capacity of Timorese scientists to resolve the agricultural problems that affect local livelihoods.

“Farmers have suffered from decades of unrest,” says Ganesan Srinivasan, a CIMMYT breeder and senior scientist involved in the project, which is funded by the Australian Centre for International Agricultural Research (ACIAR) and the Ministry of Agriculture, Forestry, and Fisheries of East Timor. “Improved maize varieties will provide food and nutritional security for resource-poor farmers.” 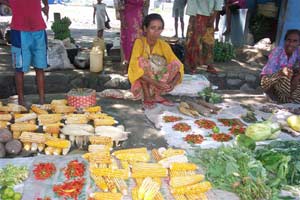 Almost 800,000 people live in East Timor, which was once a Portuguese colony. The BBC estimates that about 25% of the population died during Indonesia’s occupation, which began after Portugal withdrew in 1975 and lasted until 1999. After citizens voted for independence, anti-independence militia killed hundreds of people and destroyed towns and already poor infrastructure.

Australian agronomist Brian Palmer manages the project, which aims to improve farmers’ access to high quality seed, create a crop performance database for research to raise crop productivity, and increase the capacities of East Timorese institutions and staff in evaluation, production, and distribution of improved germplasm.

Scientists have been testing the adaptation of various lines of rice, maize, cassava, beans, potatoes, sweet potatoes, and peanuts that have been supplied by CIMMYT, IRRI, CIAT, CIP, and ICRISAT, which are the five CGIAR centers involved in the project. Researchers have identified and multiplied well-adapted varieties that are tolerant to pests, diseases, drought, and low soil fertility.

In the first phase of the project, which lasted from October 2000 to December 2003 followed by a six-month bridge phase, CIMMYT provided improved, stress-tolerant, high-yielding maize varieties to test in different agro-climatic conditions of East Timor. Scientists initially selected maize varieties using information from CIMMYT records, results from similar regions, and input from researchers. They tested several yellow open-pollinated varieties and a few white quality protein maize varieties, among others.

In their experiments, researchers found that yields were much higher when improved maize cultivars and fertilizer were used. During 2001–02, one variety yielded almost four tons per hectare. In the second and third years, CIMMYT maize varieties yielded around six tons per hectare, compared with two tons per hectare from the local variety that was used as the benchmark.

Although it is difficult to identify varieties that are well adapted across East Timor’s diverse climatic and soil conditions, the project has already found several. During 2003–04, researchers received enough seed to evaluate selected varieties in yield trials, to use in on-farm tests, and to multiply to produce more seed. In addition to this, more seed from the five most promising varieties has been increased in India and will be shipped to East Timor.

The second phase of the project, lasting from three to five years, will focus on better village welfare by promoting farmer use of improved varieties and strengthening MAFF and other East Timor institutions. Challenges include building research capacity, creating a system to continuously screen and release varieties, establishing a good seed production and distribution system, and reducing post-harvest losses. Representatives from the five CGIAR centers, ACIAR, AusAID, East Timorese research organizations, and other partners will discuss plans for phase two in August 2004. They plan to support model farms, farmer demonstrations, seed production, germplasm management, and research on variety adaptation and crop agronomy.

They also hope that East Timorese researchers will be able to train at a location where CIMMYT multiplies seed. Because the few trained researchers with bachelor’s and master’s degrees hold important positions in the Ministry of Agriculture, it is difficult for them to train for an extended period of time. However, five researchers and extension workers from East Timor have received training at ICRISAT in India. Pending Ministry approval, CIMMYT may conduct a training course in East Timor in August about on-farm testing and seed production.

No Maize, No Food