Mainassara Zaman-Allah uses new technologies to speed up the collection of plant information for breeding. 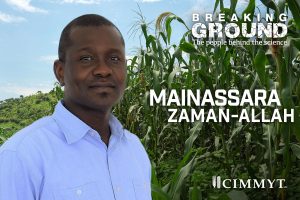 Field phenotyping – the comprehensive physical assessment of plants for desired traits – is an integral part of the crop breeding process but can create a costly and time-consuming bottleneck, according to Mainassara Zaman-Allah, abiotic stress phenotyping specialist at the International Maize and Wheat Improvement Center (CIMMYT).

“Previously, we used to measure maize height with a stick, and manually capture the data” he said. “Now we use proximal sensing—a laser distance meter connected to your phone or tablet that automatically captures data —to measure plant height 2 to 3 times faster for half of the labor. We also use digital ear imaging to analyze maize ear and kernel attributes including grain yields  without having to shell the cobs, saving time and money on labor. This will be helpful particularly to most of our partners who do not own the machinery required for shelling after harvest”

Zaman-Allah also works with aerial sensing, using unmanned aerial vehicles equipped with sensors to fly over crop fields and collect images that are later processed to extract crop phenotypic data. “Aerial phenotyping platforms enable us to collect data from 1,000 plots in 10 minutes or less, a task that might take eight hours to do manually,” he said.

This means that developing improved maize varieties with tolerance to heat and drought, as well as devastating diseases such as maize lethal necrosis (MLN), could become faster and more cost-effective than ever before. Application of aerial and proximal sensing technology for high-throughput phenotyping, in which large amounts of data are processed simultaneously, provides high-resolution measurements for research plots that can enable the rapid identification of stress tolerant varieties, speeding up the breeding process.

The time and money saved by using these technologies allow researchers to develop and deploy improved varieties more quickly to the smallholder farmers that need them most, which is especially important as climate change begins to change growing environments faster than traditional varieties can adapt.

For Zaman-Allah, this interest in improving agriculture for all is “in the blood,” he said. While growing up in Niger, his family had to move to a different city every three years due to his father’s job. “Everywhere we moved; my father made sure that we rented or bought a small farm, where I would be involved in crop production every year during the long vacations over the rainy season. That was a wonderful experience as I learned a lot regarding crop production, drought and soil fertility management.”

He would take this first-hand experience in agriculture to the next level while earning undergraduate and postgraduate degrees at the University of Carthage in Tunisia and conducting research for his Ph.D. in plant eco-physiology at the French National Institute for Agricultural Research (INRA) through a grant from the French Agency for International Cooperation.

Zaman-Allah joined CIMMYT in late 2012 as a scientist with a specialization in heat and stress resilient maize, based in Harare, Zimbabwe. He has been working as an abiotic stress phenotyping specialist since late 2015, and is considered a pioneer in remote sensing work in CIMMYT maize breeding. In addition to his work as a scientist, he also writes codes for the programs used in proximal sensing.

“As part of my current job, I develop, test and validate low-cost and high-throughput field-based phenotyping tools and methods for different desired traits in crops, including drought, heat and low-nitrogen stress,” he said.

“My team is working to provide opportunities toward next-generation phenotyping that is more compatible with maize breeders needs and that will significantly minimize selection cost while maximizing selection efficiency, accelerating the process to deliver maize varieties with better genetic traits to farmers.”

Zaman-Allah’s commitment to food security extends beyond his job. On his own time, he shares knowledge gained at CIMMYT to inform his contacts at universities and national agricultural research centers in Niger and help increase his home country’s capacity to produce healthy crops.

“Maize and wheat are not usually grown in Niger due to heat, drought and low soil fertility, but due to recent advances in CIMMYT technologies and improved varieties, they are now a possibility,” he said. “People were doubtful at first, but when improved varieties from CIMMYT Mexico and CIMMYT-Zimbabwe were planted side by side with locally released varieties, there was no comparison—the CIMMYT varieties performed far better.”

Working at CIMMYT has given Zaman-Allah a unique opportunity to help farmers while also working with a top-notch international team.

“I really enjoy the teamwork, the innovation and the challenge to make a difference,” he said. “It’s immensely satisfying to be able to contribute in helping smallholder farmers through my work. Whenever I take vacation, I always go back to the village in Niger where my family is from, and I love to talk with local farmers about the latest agricultural technologies that could help them.”

Innovation and technology
Features 25 May 2017

Vijay Chaikam works as a scientist and manager at the International Maize and Wheat Improvement Center doubled haploid facility in Kiboko, Kenya.