Bangladesh and CIMMYT: decades of partnership, commitment, and achievement 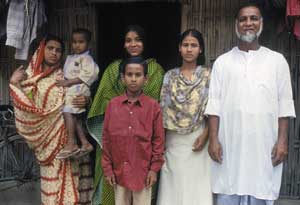 Work by CIMMYT with researchers, extension workers, policymakers, and farmers in Bangladesh for nearly four decades has helped establish wheat and maize among the country’s major cereal crops, made farming systems more productive and sustainable, improved food security and livelihoods, and won ringing praise from national decision makers in agriculture, according to a recent report published by CIMMYT.

With an average of over 1,000 inhabitants per square kilometer, Bangladesh is among the world’s most densely-populated countries, and nearly two-thirds of its people work in agriculture. The country furnishes a case study for the future of farming in developing countries: as a result of intensive cropping rotations, every square centimeter of arable land is used 1.8 times a year, and resources are stretched beyond what is normally considered “sustainable.” A recent report on CIMMYT efforts in Bangladesh gives an interesting account of how, through broad partnerships and sustained research for farmers, an international agricultural center can help improve farmers and consumers’ lives.

“The last quarter century of work by a small team of dedicated CIMMYT staff and their colleagues in Bangladesh national programs has brought improvements in local and national income, food security, human nutrition, and well-being,” says agronomist Stephen Waddington, who worked for CIMMYT in Bangladesh during 2005-2007. “This is easily seen by any visitor to Bangladesh, where nowadays many otherwise poor people regularly have wheat chapattis for their breakfast, a glass of milk from triticale fodder-fed cows for their lunch, and maize-fed chicken, eggs, or fish for their dinner.”

Bangladesh emerged on the map of significant wheat-growing countries in the 1980s, according to Waddington. “Wheat became the second major cereal after rice, contributing to food security and human nutrition, and improving the livelihoods of resource-poor farmers and urban consumers,” he says. “Nineteen of the twenty-four wheat varieties released in Bangladesh carry CIMMYT lines in their backgrounds.” Much crop management and soil research for wheat was conducted in joint Bangladesh Wheat Research Center (WRC)-CIMMYT programs.

Finally, in recent years, triticale has become a source of high-quality green fodder for small-scale dairy producers during the cool, dry, winter season. “Dual-purpose fodder and grain triticale can produce 7 to 12 tons per hectare of fresh fodder, and as much as 2 tons per hectare of grain for poultry feed or for chapattis,” says Haque. All triticale varieties sown in Bangladesh come from CIMMYT.

Within the last decade or so, agriculture in Bangladesh has become highly-mechanized: 8 of 10 farmers use two-wheel tractors, which are more apt for their small and scattered land holdings than the four-wheel variety. Since 1995, Haque has worked with the WRC and local organizations to promote a varied set of implements for reduced, more efficient tillage and seeding. One key aim has been to enable farmers to sow wheat or other crops directly after rice harvest in a single day—instead of after two weeks of back-breaking, fuel-hungry plowing—thus saving money and allowing the new crop to mature before the pre-monsoon heat shrivels the grain.

“To date thousands of farmers have adopted a small, two-wheel tractor-driven implement that tills, seeds, and covers the seed in a single pass,” says Haque. “This reduces turn-around between crops by 50%, cuts costs 15-20%, saves 30% in irrigation water and 25% in seed, and improves fertilizer efficiency—all this, as well as increasing yields by 20%, for wheat.” Owners of the single-pass seeding implement often hire out their services, earning USD 1,000-2,000 a year and each helping 20-100 other farmers to obtain the above-mentioned benefits. In addition, the reduced tillage implement and practices help address labor shortages that constrain farm operations at peak times, and are opening lucrative opportunities for machinery manufacturing and repair businesses.

For the future, CIMMYT staff are testing and promoting with researchers and farmers the use of permanent, raised beds and straw retention systems that can increase yields as much as 50% in intensive, wheat-maize-rice cropping sequences. Future activities of CIMMYT-Bangladesh will also focus on strengthening wheat and maize breeding programs, system-based research and resource-conserving practices, and the use of maize as food, fodder, and feed. “We’d also like to do more capacity building, study soil health and nutrition, and better disseminate useful technologies to farmers and extension agents,” Haque says, “but much depends on the resources available.”

Extensive partnerships key to past and future success

“A taste of the new CIMMYT”: DG shares vision with fund council

Celebrating CIMMYT: what will the next 50 years hold?