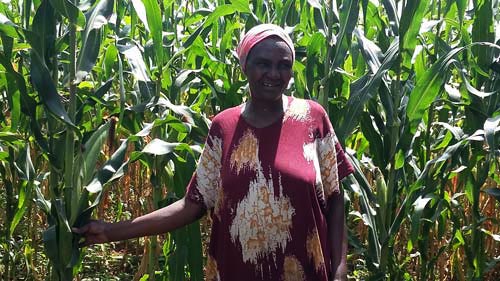 Poor soil fertility is a major – yet often overlooked – factor affecting food production in Africa. Farmers suffer low yields and crop failure due to poor soils, a situation that has crippled food security for millions of smallholders in the continent.

For farmers like Mrs. Azbetta Ogembo, the challenge of poor soil fertility is common in her village in Kakamega County, western Kenya. To address this problem, she buys fertilizer every planting season to boost productivity. But for better yield, in addition to fertilizer, maize farmers are advised to use certified seed tailored for specific soils and agroecologies. 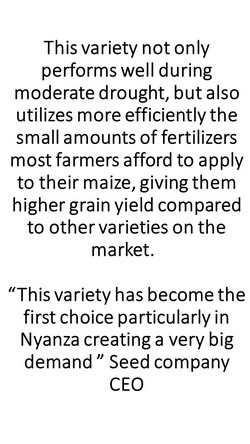 Yet when Azbetta received a maize variety called WH507 from the One Acre Fund to plant in preparation for the 2015 long rains, she was very skeptical. And why was this? “I had never used WH507 before. That is why I resisted planting the seed at the beginning. I was afraid of losing yields, which I depend on for food. I just did not know how this variety performs,” says Azbetta. This was her first time to see this variety, and with no one to attest its performance, Azbetta was simply not ready to risk losses from low yield after investing heavily on her farm.

Now, two months before she harvests her maize, the widow and mother of seven is elated. The first thing Azbetta noticed about WH507 is that it matures faster compared to other varieties she has used before. Furthermore, the plant has very strong stalk, good height and the cobs are big and full. This was a very pleasant surprise to her.

“I am certain of harvesting more than 150 kilograms from the two kilograms of seed I planted. I will definitely plant this maize on a bigger land in the next season since I’m assured of very good harvest for food and some extra to sell so I can raise money for my children’s school fees,” says Azbetta. She also plans to use the additional cash to purchase more seed and enough fertilizer for the next planting season.

The Improved Maize for African Soils (IMAS) Project led by CIMMYT, supported the Western Seed Company – the sole distributor of WH507 – to produce parent seed for mass production because WH507 was found to be both nitrogen-use efficient (NUE) and drought-tolerant. This variety not only performs well during moderate drought, but also utilizes more efficiently the small amounts of fertilizers most farmers afford to apply to their maize, giving them higher grain yield compared to other varieties on the market.

Just as in Kenya, most soils in sub-Saharan Africa are nitrogen-deficient, yet nitrogen is one of the most important nutrients for plants. Many farmers in Kenya apply far less fertilizer than the recommended amounts because nitrogen fertilizers are costly. And even with subsidized prices, demand outstrips supply. But affordability is still the crunch, and not awareness – farmers know all too well the importance of applying fertilizers, but cannot afford to buy: for instance, Azbetta uses at most 100 kilograms of fertilizer for her three-acre land. She knows this is an under-dosage, but this is all she can. Farmers who cannot afford fertilizer use manure.

Science offers a partial solution at midpoint to beat the fertilizer crunch: “NUE maize is by no means a replacement for fertilizer. In fact, farmers who do not apply any fertilizers on their farms will not get as much yield as desired. What this variety simply does is it makes the most of what is made available to the soil by the farmers as dictated by their economic ability,” says Dr. Biswanath Das, a maize breeder at CIMMYT.

The Western Seed Company plans to produce 1,000 tonnes from the WH507 parent seed to increase its availability in the market for farmers to buy at the current market value of KES 410 (USD 4) per a two kilogram pack. “In 2015, we produced 150 tonnes of WH507 for selling mainly in Nyanza and western regions where we operate. This variety has become the first choice particularly in Nyanza creating a very big demand in this region because of its suitability in warm and humid areas. In western Kenya the demand is still low,” says Saleem Esmail, the Managing Director of Western Seed Company. The company is actively promoting the variety in western Kenya. “We conducted 1,200 demonstration plots during the short rains in 2014 to sensitize farmers on WH507,” adds Saleem. According to Saleem, the level of production depends on the farmers’ adoption and uptake of the seed, which determine how much of the seed will be produced.

Efforts to increase awareness on improved varieties like WH507 will remain key particularly in western Kenya to ensure that farmers like Azbetta enjoy good harvests to counter the economic and ecological constraints they face. Seed companies and agricultural extension systems can play a major role in creating this awareness, as well as promoting good agronomy practices including proper use of fertilizers.

Maize farmers and seed businesses changing with the times in Malawi