Maize farmers and seed businesses changing with the times in Malawi

In Malawi, farmers who have in the past few years witnessed crop failure due to poor rains are switching to two new drought tolerant maize varieties, and seed companies are changing their business models to keep up. 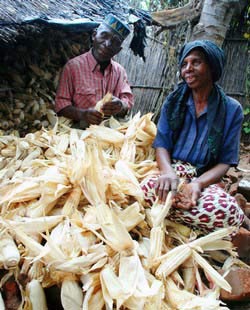 “The climate is changing, rainfall is decreasing and the weather is now dictating which varieties farmers grow and in turn which varieties seed companies produce,” says Dellings Phiri, general manager of Seed Co. Malawi, a leading southern African seed company.

He refers to two new drought tolerant maize varieties–ZM 309 and ZM 523–developed specifically for Malawi’s drought-prone areas with infertile soils by CIMMYT, Malawi’s Ministry of Agriculture and Food Security, and the Chitedze Research Station, through the Drought Tolerant maize for Africa (DTMA) project. The research was supported by the Bill & Melinda Gates Foundation, and the Howard G. Buffett Foundation. The varieties were officially launched in March 2009.

“In Malawi, each adult eats 300 kilos of maize annually, and ZM 309 and ZM 523 will give farmers a boost in safeguarding their maize harvests from the increasing threat of drought,” says Wilfred Mwangi, associate director of CIMMYT’s Global Maize Program and leader of the DTMA project.

First introduced by local extension agents to farmers in the drought-prone Balaka area through farmer-managed demonstration plots, these varieties have rapidly become popular among farmers, who have been impressed by their superior performance and accepted them. Compared to other popular commercially marketed varieties, farmers have found ZM 309 and ZM 523 to have higher yields, mature earlier, offer better resistance to common maize leafy diseases, and be better for pounding into flour. Locally, ZM 309 is known as Msunga banja, Chichewa for “that which takes care of or feeds the family,” while ZM 523 is Mwayi, which means “fortunate.”

Malawi supports for food security
In March 2009, farmers recommended ZM 309 for inclusion in Malawi’s Agricultural Input Subsidy Program, introduced in 2004 and credited with improving the country’s agricultural productivity and food security. Targeting smallholder farmers with access to land and other production resources, the program involves distribution of coupons for subsidized improved maize seed and fertilizer–one for a 100-kilogram bag of fertilizer and another for either 3 kilograms of standard seed or 2 kilograms of hybrid seed. In September 2009, Malawi’s President Dr. Bingu wa Mutharika endorsed ZM 309 saying, “ZM 309 will give Malawi farmers an advantage because it is high-yielding and drought tolerant. We welcome this research because it will help Malawi cope with climate change and improve food security.” The inclusion of ZM 309 in the subsidy program has seen the variety grown in six of the most drought-prone districts in Malawi, contributing to improved food security of thousands of farm families.

No more hungry months
One such family is that of Bamusi Stambuli, 63. Together with his wife Sagulani, they have they have 7 children and 5 grandchildren. In April 2010, Stambuli harvested nearly 1.8 tons of ZM 309 from his 0.6-hectare plot. “I will now be able to feed my family for a whole year,” says Stambuli proudly.

This year Stambuli will save at least USD 330 that he would have spent to purchase maize for his family. Farmers who grew ZM 309 obtained yields of 3.0 to 3.5 tons per hectare–twice those for the popular local varieties, Kanjelenjele and Kagolo.

In an area where locals rely on farming, fishing, basket-making, sale of firewood, and general trading, Stambuli’s success with ZM 309 is drawing many peers to his farm to buy ZM 309 seed.

Business as (un)usual
ZM 309 and ZM 523 are open pollinated varieties (OPVs), meaning farmers can save seed from one season and plant it for up to three subsequent seasons without punitive losses in yields or other desirable traits. Ordinarily, OPVs are not as attractive to commercial seed companies as hybrids, because with hybrids farmers have to buy and sow fresh seed every season or risk decreased performance of their crops. With ZM 309 and ZM 523 this is not the case. Seed Co. is changing its business model and investing in producing adequate amounts of both varieties to meet increased demand from farmers.

“We hope that from seeing the performance of ZM 309, farmers will be encouraged to start buying certified maize seed to boost production,” says Phiri.