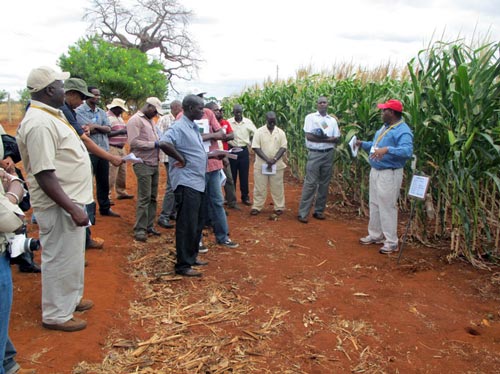 Twenty-nine drought-tolerant, early maturing, disease-resistant hybrids developed by the Water Efficient Maize for Africa (WEMA) project are getting ready to be released, a huge success for WEMA and all its stakeholders. “The 29 hybrids advanced to national performance trials is a record release by an entity in Africa in all times. These high performing hybrids yield 20–35 % more grain under moderate drought compared to 2008 commercially available hybrids,” said Stephen Mugo, CIMMYT principal scientist and co-chair of the WEMA Product Development Team. “Let us seize the technological opportunities that are there to boost productivity and people’s welfare,” he added. The white hybrids resistant to stem borers, maize weevils, and large grain borer, and to diseases such as grey leaf spot, northern leaf blight, and maize streak virus will complement other drought tolerant hybrids developed and released by the Drought Tolerant Maize for Africa (DTMA) initiative. These first WEMA hybrids were developed from CIMMYT’s drought tolerant germplasm accelerated using the doubled haploid technology from the Monsanto platform.

Moderate drought is a major production constraint for small-scale farmers in Africa who rely on rainfed agriculture, and this rapid progress is thus great news for African farmers. WEMA stakeholders from Kenya, Uganda, Mozambique, Tanzania, and South Africa met in Nairobi, Kenya, during 10-13 September 2012 for the WEMA Project Second Regional Stakeholders and Seed Company Meetings organized by CIMMYT, Monsanto, and the African Agriculture Technology Foundation (AATF) to discuss the project. Denis Kyetere, AATF executive director and executive advisory board member, explained that WEMA is a public-private partnership with the goal of developing and deploying royalty-free African drought-tolerant and insect-pest resistant climate change ready maize. Wilson Songa, Kenya’s Agriculture Secretary and the chief guest at the meetings, noted that Africa’s agriculture must be competitive and must ensure that productivity is meeting the continent’s needs. This can be achieved by advancing the cause of science and technology in the midst of climate change, an approach taken by WEMA and appreciated by Ephraim Mukisira, WEMA executive advisory board member and the director of Kenya Agricultural Research Institute (KARI). “We in the agricultural sector must strive to cut the hunger and improve the welfare of thousands who rely on agriculture. We would like to see the expansion of maize production area but, more importantly, maize productivity. We must embrace science and technology to achieve these goals,” said Mukisira.

According to Sylvester Oikeh, WEMA project manager, the first conventionally bred hybrid seeds will be available in 2014 to farmers in Kenya, Uganda, and South Africa, and in 2015 to farmers in Mozambique and Tanzania. Reiterating Monsanto’s excitement and commitment to WEMA, Kinyua MMbijjewe, Monsanto’s Africa Corporate Affairs manager, warned that Africa cannot afford to rely on maize imports: “Africa should strive to be self-reliant in maize production. Those areas suitable for maize production should be made more robust through the adoption of appropriate technologies.”

The stakeholders later visited WEMA trials at KARI-Kiboko. They were impressed by the performance of the varieties on display in the demonstration plots, as many have outperformed some of the best local hybrid checks on the market. After seeing the trial fields, seed companies from Kenya, Uganda, and South Africa expressed their readiness to take up the promising varieties for commercialization, noting that it is a great business opportunity. According to Norah Olembo, Africa Biotechnology Stakeholders Forum executive director, rapid release of the varieties to the farmers is also critical for improving productivity, food security, and livelihoods, considering that 75 % of agricultural land in sub-Saharan Africa is drought prone.

Honorable Casimiro Pedro Sacadura Huate, Mozambican Member of Parliament and deputy chairman of the Commission on Agriculture, Rural Development, Economic Architecture and Services, assured the project implementers of the government’s support. His counterpart from Uganda, Honorable Binta Lukumu, member of the Parliamentary Standards Committee on Agriculture, promised to promote the project in Uganda and urged the project implementers to bring on board other members of parliament in WEMA countries to help them understand and champion the course of the project and argue for favorable decisions in their respective countries.

Maize that packs a punch in face of adversity: unveiling new branded varieties for Africa