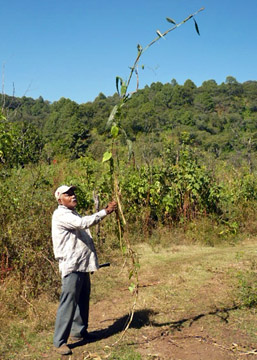 A CIMMYT team donned their expedition gear in November 2009 and set off to collect samples of teosinte, a wild relative of maize that is disappearing. The team obtained a special permit from the Mexican Department of Environment and Natural Resources (SEMARNAT) to monitor and gather annual teosinte samples from known locations in the Balsa river regions of Guerrero and Michoacán and the central plateau regions of Jalisco and Guanajuato.

The 12-person team divided into three groups and visited nearly 50 sites total. Victor Chavez and Marcial Rivas of the maize germplasm bank each led a team of five; Suketoshi Taba, head of the maize germplasm bank, and David Ellis of the United States Department of Agriculture (USDA), National Center for Genetic Resources Preservation (NCGRP) made up the third group. The groups primarily explored areas had been identified by Jesus Sanchez of the University of Guadalajara as teosinte sites. In addition, members asked local farmers for assistance locating the plants, resulting in the discovery of several new annual teosinte locations.

During their exploration, scientists stumbled upon what they believe to be the perennial teosinte Zea diploperennis near Uruapan, Michoacán. Samples were taken for further analysis. As of now, the only known natural population of this plant is in the Sierra de Manantlán Biosphere Reserve, in the state of Jalisco, Mexico.