Safe in the Bank? 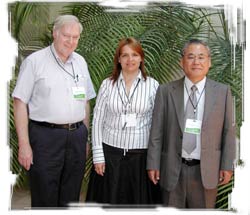 Keepers of worldwide maize germplasm collections meet at CIMMYT to see how they can work together to protect and conserve these resources.

Farmers know you protect and save your seed corn (maize) to ensure the next harvest. It’s a lesson the world apparently has not learned as gene banks, which could host tomorrow’s harvest of research breakthroughs and unique traits, find themselves nearly as endangered as the maize varieties and wild relatives they seek to conserve.

The meeting of the Maize Germplasm Network, sponsored by the Global Crop Diversity Trust, the World Bank, and CIMMYT, was called to initiate a global response to this growing crisis. Experts from around the world met at CIMMYT in Mexico in early May to begin hammering out a strategy for the long-term conservation of maize genetic diversity. Neither national nor international maize collections have fared well of late, as investments in public sector agricultural research have steadily declined and fierce competition for dwindling resources in the agricultural sciences has risen.

“People recognize that these collections have unique materials and are valuable,” says meeting co-organizer Major Goodman of North Carolina State University, “but donors simply do not like to get involved with a commitment that lasts forever, and that is what we are talking about with crop genetic resources collections.”

Ironically, the reluctance to invest in these operations comes at a time when molecular genetics opens new opportunities daily to exploit genetic resources carrying resistance to plant diseases, insect pests, and threats such as drought, soil salinity, and heat stress. Collecting and preserving the basic sources of resistance traits takes on added importance. 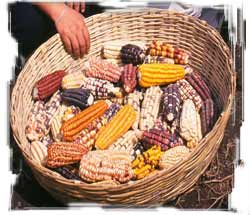 Meeting participants found “remarkable agreement” on top priorities, says Suketoshi Taba, head of the CIMMYT maize gene bank and co-organizer of the meeting. At the top of the list, he says, is rescuing landraces and adapted germplasm identified as being endangered—both of maize and its wild relative, teosinte. Also urgent is the need to create proper documentation for all collections, both from the Americas (considered “primary” diversity, being from the crop’s center of origin) and from other continents (known as “secondary” diversity). The ultimate aim is to facilitate use of the collections while reducing redundancies and their costs. Once proper documentation is achieved, it was proposed that partners would work to establish a “meta-database” of existing maize genetic databases. The essential but perpetually under-funded activities of seed regeneration and recollection must also be considered. Finally, participants agreed that CIMMYT should serve as the coordinating institution for advancing the identified priorities forward on the international scientific agenda.

The meeting co-organizers expressed the consensus of the group in stating that the challenges they face are beyond the capacity of any single institution or nation—thus the need for a broad-based solution. They also observed that clearly there are roles, such as the costly long-term maintenance of collections and distribution of seed for research, that are better assumed by large gene banks, such as those at CIMMYT or the USDA maize collection at Ames, Iowa. These banks, however, find it difficult to regenerate varieties that originated in tropical or highland areas, a role better played by national gene banks. Furthermore, the national banks, when properly resourced, can more efficiently collect new seed and distribute seed from collections to local plant breeders and biologists. But those wishing to implement such a division of tasks must first overcome barriers of plant ownership rights, nationalism, phytosanitary regulations, and a tower of database babble that hampers effective documentation and use of collections.

“I am sure that there is a role for the Trust in this work, particularly in securing unique materials, securing landraces, and helping with the backlog of materials that urgently need regeneration,” says Brigitte Laliberté of the Global Crop Diversity Trust. “But it is critical to the Trust that a global system and strategy is established whereby there are roles for international organizations and good links with national programs. This meeting was a constructive first step.”

Safe use of herbicide and effective weed management course