“Today Embu farmers are reaping benefits associated with conservation agriculture, where SIMLESA started activities in 2010,” said Charles Wanjau, District Agricultural Officer, Embu East. “We hope that through CASFESA, the benefits that accrued from the SIMLESA project will spread to many more farmers in Embu and beyond for improved food security.”

Wanjau was referring to the project “Conservation Agriculture and Smallholder Farmers in Eastern and Southern Africa,” that begun in June 2012 in Ethiopia and January 2013 in Kenya, with EU-IFAD funding for a period of two and half years. The project will leverage institutional innovations and policies for sustainable intensification and food security in Ethiopia, Kenya, and Malawi, and demonstrate conservation agriculture as a sustainable and profitable farming practice in randomly selected villages. The effort is also meant to assess the effects of markets and institutions on adoption and impacts, through baseline and impact studies in both treatment and counterfactual (control) villages. In Kenya, activities are under way in 15 villages mainly in Embu-West and Embu-East Districts to establish researcher/farmer managed demonstration plots on the farms of two volunteer farmers per village. The demo plots are planted with farmer’s preferred maize and bean varieties using locally recommended seed rates and fertility inputs.

The first CASFESA stakeholder workshop in Kenya was held at Embu on 22 February 2013 and attended by 30 farmers hosting demo plots, 16 officers (mostly frontline extension agents) from the Ministry of Agriculture, and scientists from CIMMYT and the Kenyan Agricultural Research Institute (KARI). Other participants included the Kenyan Equity Bank, Kilimo Salama and Organic Africa representatives, providing farming credits insurance and inputs, respectively. The workshop included updates on project objectives and work plans, along with planning for the next year.

Subsequent workshop discussions centered on demonstration planting details: between row and within row seed spacings, crop varieties to be sown, and land preparation. In-depth observations were drawn from farmers and the extension providers’ experiences. Also discussed were the Ministry of Agriculture recommendations, which encourage tillage, and when to inter-crop maize and beans. The varied labor roles of women and men came up in conversations, with the conclusion that women typically do the bulk of planting, weeding, and harvesting. There was an on-station demonstration of conservation agriculture practices— particularly ridge planting for maize—under the supervision of Kanampiu and Micheni. This was important because all (farmers and extension providers) needed to see a successful case before embarking on establishment of proposed demos based on furrows and tillage conservation tillage practice. The workshop ended with some notable positives, such as an agreement among stakeholders regarding planting procedures and periods, as well as great enthusiasm among farmers. 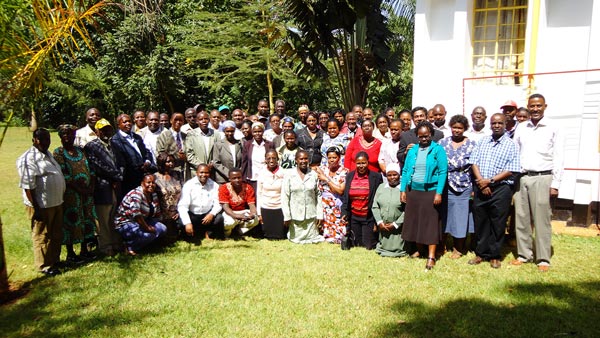 Turning on radios, tuning in to resource-conserving farm practices