Byerlee named Officer of the Order of Australia for his distinguished service to sustainable development, poverty reduction, and food security.

Derek Byerlee, former director of CIMMYT’s economics program, has been named an Officer of the Order of Australia, the country’s second-highest membership honor, for his distinguished service to sustainable development, poverty reduction, and food security.

The award was among those announced by Australia on June 10, 2019, as part of birthday commemorations for Queen Elizabeth II.

“This was all quite a surprise to me,” said Byerlee, currently an Adjunct Professor at Georgetown University in Washington D.C. and making arrangements to attend the award ceremony in Australia in September.

Byerlee holds CIMMYT in special regard. “CIMMYT was the highlight of my career,” he explained.

Interested in agriculture since his childhood on a sheep and wheat farm near Orroroo in the South Australian Wheat Belt, Byerlee joined CIMMYT in 1977 as one of its first economists, with stints in Mexico and South Asia. He led CIMMYT economics research during 1987-94 and is fondly remembered by colleagues and support staff from that period.

“Derek has made an immense contribution to the developing world and the profession,” said Olaf Erenstein, current director of the CIMMYT socioeconomics program. “He helped put CIMMYT and its economics program on the global map of research for development. His humble yet insightful contributions guided the way for many, including myself.”

Byerlee moved to the World Bank in 1994, heading its support to agricultural research before becoming Rural Strategy Adviser. He later led the team that produced the agency’s influential 2008 World Development Report Agriculture for Development, one of the Bank’s most respected and widely quoted publications and its first ever to focus on agricultural development.

Since retiring from the World Bank, he has held diverse consultancy and advisory roles, including Chair of the Standing Panel on Impact Assessment of CGIAR, Member of the Technical Advisory Committee of the Global Agricultural and Food Security Program, and Visiting Scholar at Stanford University.

Byerlee has published widely on agriculture research policy and impacts, farming systems and technology adoption, food pricing policy and land-use changes, and is a Fellow of the American Association of Agricultural Economics.

Author of the 2016 publication, “The birth of CIMMYT: Pioneering the idea and ideals of international agricultural research,” Byerlee has called for a renewed commitment to eliminating hunger through political action at local, national, and international levels, and particularly enjoys teaching about this and related topics at Georgetown University.

“Working with these excellent students gives me a sense of optimism about the future of the world,” Byerlee stated in a recent article in The Flinders News.

CSIRO and CIMMYT link on wheat phenomics, physiology and data 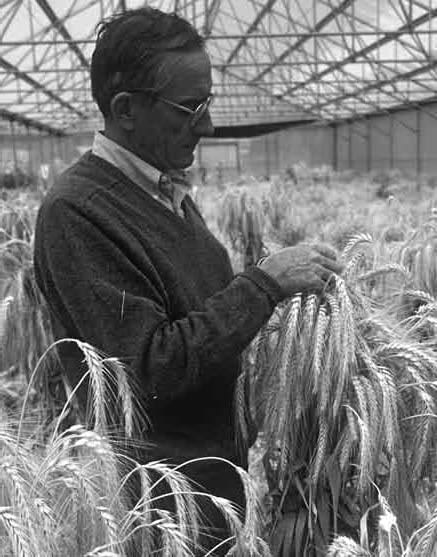