“We are very, very dry,” says farmer Yupin Ruanpeth. “Last year we had a drought at flowering time and we lost a lot of yield.” In fact, she explains, during the last five years, her family’s farm has suffered from severe drought three times in a row. The soil is good and in a year with no drought they can harvest five tons of maize per hectare, but last year they could only harvest three tons per hectare.

Geographically, the Thai province of Nakhon Sawan lies only a short drive from lush lowland paddy fields, but it seems a world away. In this region the rainy season (between May and September) brings enough water for a single crop, usually of maize or cassava, and in the dry season the fields lie fallow. Almost all maize in Thailand is rainfed, grown under similar conditions 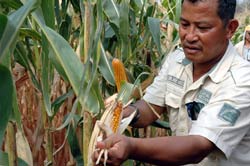 At the Thai Department of Agriculture’s Nakhon Sawan Field Crops Research Center, Pichet Grudloyma, senior maize breeder, shows off the drought screening facilities. Screening is carried out in the dry season, so that water availability can be carefully controlled in two comparison plots: one well-watered and one “drought” plot, where watering is stopped for two weeks before and two weeks after flowering. Many of the experimental lines and varieties being tested this year are here as the result of the Asian Maize Network (AMNET). Funded by the Asian Development Bank, this CIMMYT-led project has brought together scientists from the national maize programs of five South East Asian countries to develop drought tolerant maize varieties and deliver them to farmers.

“We already have two releases under AMNET,” explains Grudloyma. These are varieties produced by the national maize program, focusing prior to AMNET on resistance to the disease downy mildew, which have also proved themselves under drought screening. The first, Nakhon Sawan 2, was released in 2006. The second, experimental hybrid NSX 042029, has been popular in farmer participatory trials and with local seed companies, and is slated for release in 2008. “This is the best hybrid we have,” says Grudloyma with pride. “It’s drought tolerant, disease resistant, and easy to harvest by hand.” The two hybrids incorporate both CIMMYT and Thai breeding materials, a legacy of Thailand’s long relationship with the Center.

In current work under AMNET, the Thai breeders are crossing lines from the national breeding program with new drought tolerant materials provided each year by CIMMYT. “We screen for drought tolerance in the dry season and downy mildew resistance in the rainy season, and take the best materials forward each year,” explains Grudloyma. “We now have many promising hybrids coming though.”

Funding from the project has also had a big impact on the team’s capacity to screen those hybrids. “We had a small one to two hectare facility before; now we have four hectares with a perfect controlled-irrigation system. Because we’ve been in AMNET, we have good varieties and good fieldwork and screening capacity. This is leading to other projects, for example we’re currently working with GCP [the Generation Challenge Program].” Thailand has also taken on a role in seed distribution, receiving and sharing seed from the AMNET member countries, and testing the varieties on the drought screening plots at the Research Center. 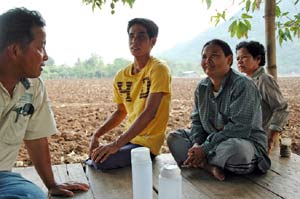 For Grudloyma, this collaborative approach is a big change. “We’ve learned a lot and gained a lot from our friends in different countries. We each have different experiences, and when we share problems we can adapt knowledge from others to our own situations.”

The Thai researchers can come up with many examples of things they have learned from their AMNET partners. “We saw the very friendly relationships between a number of seed companies and the Vietnam team, and we tried to modify the way we worked in Thailand,” says Grudloyma. “This year we shared promising hybrids with seed companies before release. Before that we just worked with farmers and small seed producers, and the seed companies could buy seed after varieties were released.” The result has been wider distribution of new drought tolerant varieties: this year the group received orders for enough parental materials for NSX 042029 to produce 300 tons of seed.

“We learned how to evaluate farmer preferences better from the Philippines team,” adds Amara Traisiri, an entomologist working on responding to these preferences. “We now use their method in all our field trials with farmers and we’re getting a more accurate picture of what farmers want.” This information caused the group to include ease of hand harvest as another trait to consider in their breeding program, after realizing how important it is to farmers. And the learning continued at this month’s annual regional training meeting. “Today, we learned a system for farmer participatory trials,” says Grudloyma, referring to a session on planning and analyzing trial data from CIMMYT maize breeder Gary Atlin. “With these new ideas to direct us we’ll be able to get better results.”

Almost all Thai maize farmers grow improved hybrid varieties, and for Ruanpeth, her priorities are clear. “Drought tolerance is very important”, she says, and dismisses other traits, such as yellow color. “No, I want varieties that are drought tolerant.” She likes to try the latest hybrids and has grown more than 10 commercial varieties. She eagerly accepts the suggestion from Grudloyma’s team to try their new hybrids on a small area this year.

The project has built capacity and relationships that will endure, according to Grudloyma. “Our station is now very good at working with drought,” he says, “and we’ll continue cooperation and providing germplasm. We already have plans for collaboration with China and Vietnam.” CIMMYT’s role in providing germplasm and access to new knowledge and technologies has been vital, as has its leadership. “It’s very hard to get hold of germplasm from anywhere except CIMMYT,” says Grudloyma. “It’s also difficult to come together: we needed an international organization to coordinate and facilitate regional interaction. With CIMMYT everything is easier.”