In the face of endemic malnutrition, researchers in Pakistan are turning to biofortified maize to combat vitamin A, zinc and protein deficiencies.

ISLAMABAD (CIMMYT) – In Pakistan, malnutrition is endemic. Children, in particular, are severely affected, with nearly half of all children in Pakistan being chronically undernourished.

Chronic malnutrition commonly leads to a condition called stunting, which can permanently limit growth and development. Pakistan ranks among the highest countries in the world for vitamin A and zinc deficiencies, which affect cognition and can lead to otherwise preventable blindness.

A new initiative hopes to combat malnutrition in Pakistan using biofortified maize, a tactic already in use in several areas around the world.

The International Maize and Wheat Improvement Center (CIMMYT) has been improving yield, increasing total protein and micronutrient levels (like vitamin A and zinc) in maize for over 50 years. This work has continued in Pakistan through the United States Agency for International Development – funded Agricultural Innovation Program (AIP) in partnership with the Pakistan Agricultural Research Council and other stakeholders in public and private sector

Since 2014, AIP has been testing CIMMYT-biofortified maize varieties in Pakistan to ensure the maize will grow in local conditions. In some cases, improved maize outperformed even local commercial checks in terms of yield. Earlier this year, CIMMYT allocated three pro vitamin A (PVA) enriched maize hybrids to the University of Agriculture Faisalabad (UAF), making Pakistan the first South Asian country to receive these products. The seed increase of the parental lines as well as the hybrids is in progress currently to expedite the process of hybrid registration and large scale seed production. Apart from the higher carotenoid content, the grain yields of these hybrids are remarkably high with a record of up to 12 tons per hectare from the various testing stations in Pakistan. The average maize yield in Pakistan is 4 tons per hectare. In addition to the support from AIP, UAF is also contributing its own resources to harness the benefits of these hybrids and eventually reduce vitamin A deficiency.

“We will engage the private sector and other value chain actors to fast track the deployment of these hybrids in the target areas,” says Muhammad Aslam, assistant professor at UAF.

Each biofortified maize variety offers different benefits to consumers. Quality protein maize includes all the essential amino acids required by the human body, enhanced zinc maize makes zinc more available for human digestion and provitamin A maize contains natural pigments, called carotenoids, which are converted to vitamin A in the body. Biofortified maize has proven to effectively combat vitamin A and zinc deficiencies, and is already being used around the world to combat malnutrition.

Maize demand in Pakistan has more than tripled since the 1990s. Maize is now being utilized by farmers and consumers in Pakistan in various forms and it is the most important cereal crop in terms of productivity, with among the highest yields in South Asia.

A number of public and private partners have expressed interest in the commercialization of provitamin A and zinc enhanced maize products. Earlier this year, Pakistan released two quality maize protein hybrids for the first time, indicating the potential for biofortified maize products to grow in the country.

“What is important now is to enhance synergies among stakeholders and mobilize resources and required expertise to scale up the seed production and dissemination of these biofortified maize products to curb the deplorable trend of Pakistan’s hidden hunger,” says AbduRahman Beshir, CIMMYT’s seed systems specialist.

For more information on this work:

The United States Agency for International Development (USAID)-funded Agricultural Innovation Program (AIP) for Pakistan works to increase agricultural productivity and incomes in the agriculture sector through the development and dissemination of new agriculture technologies. The project is managed by a group of CGIAR Centers and the Pakistan Agricultural Research Council (PARC), led by the International Maize and Wheat Improvement Center (CIMMYT).

A recently held traveling seminar brought together private and public seed partners in Pakistan to enhance maize production and productivity in order to meet current demand and plan for future needs. 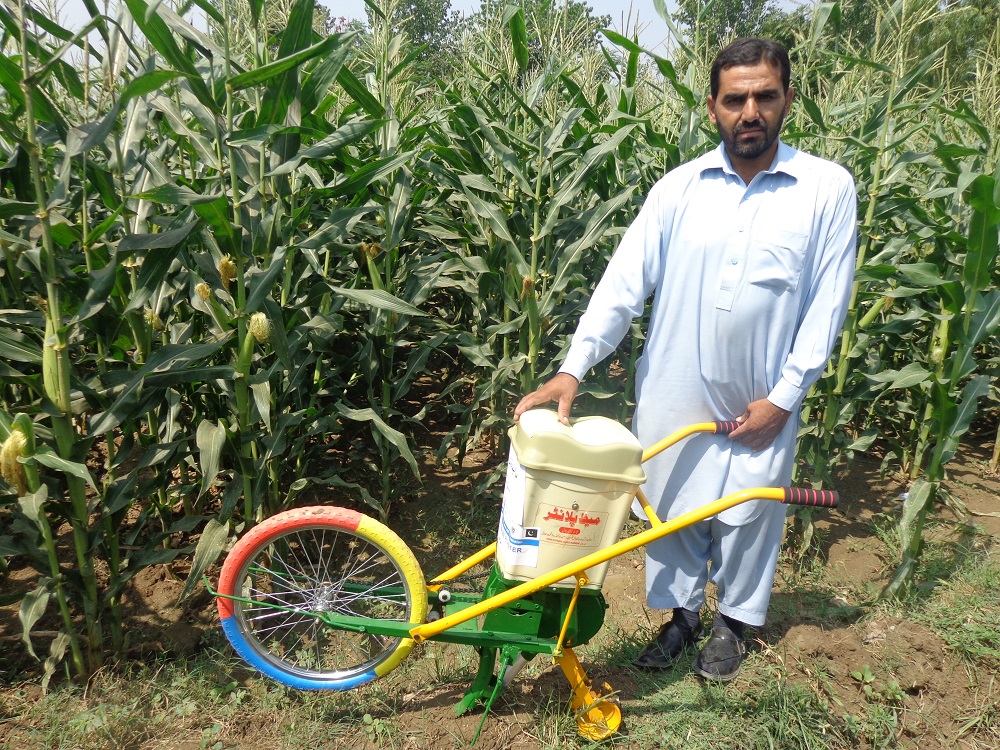 In the northwestern province of Pakistan, CIMMYT is helping connect farmers with precision planters to support higher maize yields and incomes.

AbduRahman Beshir and his team are developing climate-resilient, biofortified and biotic stress-tolerant maize to enhance the maize seed sector.