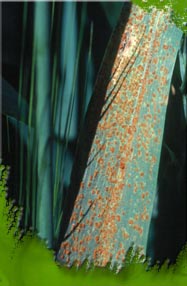 Every 1990-term US dollar invested in CIMMYT’s wheat genetic improvement over the past 40 years has generated at least 27 times its value in benefits from leaf rust resistance breeding in spring bread wheat alone, according to a recent CIMMYT study entitled “The Economic Impact in Developing Countries of Leaf Rust Resistance Breeding in CIMMYT–Related Spring Bread Wheat.”

Spring bread wheat covers about two-thirds of the developing world’s wheat area, and almost 80% of that area was sown to CIMMYT-related semidwarf varieties in 1997. Using the data on the composition of varieties sown that year, the study estimated the economic impact of CIMMYT’s efforts to develop leaf rust resistant spring bread wheat varieties since 1973.

Puccinia triticina is currently the most widespread rust in the world. The development of durable genetic resistance to this rust has been a plant breeding objective since the early 1900s and a priority of CIMMYT’s wheat breeding program since its inception. Although gene manipulation has brought about more stable patterns of resistance, rust still causes yield losses in many wheat-producing areas.

C.N. Marasas, working at the Agricultural Research Council in South Africa at the time of the study, and M. Smale from the International Plant Genetic Resources Institute and the International Food Policy Research Institute conducted the research along with CIMMYT wheat geneticist and pathologist R.P. Singh.

They applied an economic surplus approach adjusted for maintenance research and a capital investment analysis to estimate the returns on CIMMYT’s investment in wheat genetic improvement. The results suggest an internal rate of return of 41%. Allowing for discount factors, the net present value was US$ 5.36 billion (in 1990 dollars), and the benefit-cost ratio was 27:1.

The study emphasizes the importance of maintenance research in crop breeding programs. CIMMYT’s work in leaf rust resistance has made substantial economic impacts in developing countries, where farmers use mainly resistant varieties, not fungicide, to control leaf rust. Findings show that wheat yield increases over the years have been due in part to yield potential protection through disease resistance breeding.