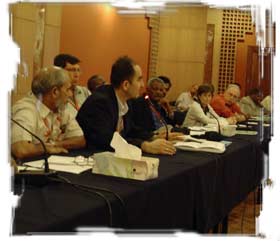 When wheat scientists and policy makers convened in Alexandria, Egypt earlier this month, one might have been forgiven for thinking that a war was afoot. And it is. Scientists are launching an offensive against wheat stem rust, an old foe of farmers that is threatening resurgence.

Words like ‘emergency’, ‘disaster’, ‘catastrophe’, and ‘devastation’, were used at the meeting to paint a picture of the havoc that epidemics of the fungal disease, also known as black rust, could precipitate on the world’s food security and economy. “This is a global threat…,” CIMMYT Director General Masa Iwanaga told the First International Workshop of the Global Rust Initiative (GRI), 9-11 October. “The risk of a stem rust epidemic in wheat in Africa, Asia and the Americas is real, and must be averted before untold damage and human suffering is caused,” said Mahmoud Solh, Director General of the International Center for Agricultural Research in the Dry Areas (ICARDA). Preliminary field evidence from Kenya indicated that many more varieties of wheat could be threatened by rust than previously thought.

The GRI—a consortium coordinated by CIMMYT and ICARDA that involves agricultural research institutes from 30-plus countries—will use scientific knowledge and global cooperation as its primary ammunition to fight the disease. Tactics will include worldwide surveillance for virulent strains of the stem rust fungus Puccinia graminis (‘trap nurseries’—small fields where wheat known to be susceptible to the new disease has been planted) have been positioned in at-risk countries in Africa, the Middle East and South Asia); zeroing in on resistance genes and using these in breeding programs; and accelerated seed multiplication and dissemination of the new, resistant breeds. “We basically have to replace all the wheat in the world,” says GRI Coordinator, CIMMYT wheat scientist Rick Ward.

It is no mean task; farmers and breeders select wheat varieties for their high yield, robustness against pests and diseases, but also properties such as grain color, maturity period, and bread making quality, and the GRI’s work will have to keep these in mind. Furthermore, preferences vary by region, often depending on the form in which the wheat arrives at the table. Seed delivery will also need to be addressed.

Infection with the fungal disease first appears as deep orange pustules on young wheat stems, and without prompt intervention with fungicides, farmers’ fields are converted into a tangled mass of black stems with shriveled grain. Severe infections can lead to total crop failure. A new variant of the fungus, Ug99, has established itself in bread wheat farmers’ fields in Kenya and Ethiopia, and resource-poor smallholders who cannot afford fungicides are quickly losing the battle against stem rust.

Until new, resistant varieties are in the hands of farmers, Ward says part of the GRI’s resources will be directed towards an aggressive regimen of fungicides to suppress stem rust hot spots before they spread. “A stem rust epidemic is much like a bush fire; if it’s not contained, it becomes exceedingly difficult to stop,” he says. 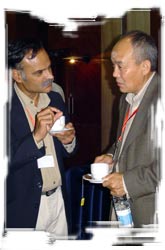 Researchers at the Alexandria meeting were relieved to hear that GRI-coordinated screening of twelve thousand wheat cultivars has yielded a handful of potential Ug99-resistant candidates. This positive news came from researchers at Njoro, a high-altitude research station of the Kenya Agricultural Research Institute (KARI), and the Melkasa station of the Ethiopian Institute of Agricultural Research (EIAR). The promising varieties are being fast-tracked for multiplication and release to farmers. Ward announced that the GRI will now use molecular breeding, which reduces the breeding process by several years, as a routine.

Even with modern breeding and communication technologies, the GRI’s success will hinge on the spirit of global cooperation to overcome blights that threaten the world’s food security.